Chelmer is a middle suburb in the City of Brisbane, Queensland, Australia,[3] 7 kilometres (4.3 mi) west of the Brisbane CBD on the Brisbane River. Chelmer is zoned as a residential area, and consists of low-density housing. It has many fine Queenslanders, characterised by wooden verandahs, wide stairways and roofing of galvanized iron, but in recent years solid brick homes have been built also. It suffered badly from the 2011 Queensland floods, with many homes submerged by the rising river.[4]

Chelmer is located on a bend of the Brisbane River, between the Chelmer and Indooroopilly reaches, with all sides except south bounded by the river.

The suburb takes its name from the Chelmer railway station, which was named in 1881 probably after the Chelmer River in Essex, England. The station was previously known as Oxley Point and Riverton.[3] In July 1884, 226 subdivided allotments of "Township of Riverton on the Brisbane River" Estate were auctioned by E. Hooker & Son. A map advertising the auction shows the area to be on the Regatta Reach of the Brisbane River.[5] [6] In November 1901, 168 subdivided allotments of "Chelmer Estate" were auctioned by John W. Todd Auctioneer. A map advertising the auction shows the estate to be near the Brisbane River, Chelmer Railway Station and the golf club. [7][8] In August 1923, 82 subdivided allotments of "Chelmer Park Estate" were auctioned by Isles, Love & Co. Auctioneers. A map advertising the auction states the Estate was close to the Chelmer Railway Station and the Brisbane River. [9] [10]

Laurel Avenue is considered one of the most prestigious addresses in Brisbane by some, for the reason that large portions of the avenue are overhung by large camphor laurel (Cinnamomum camphora) trees (some over a hundred years old). The Camphor Laurel trees have been declared a noxious weed by the Brisbane City Council, as their roots actively seek underground sewage pipes. 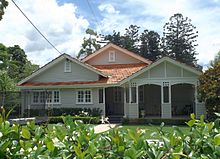 Chelmer has a number of heritage-listed sites, including:

Chelmer is divided into east and west by Queensland Rail City network's Ipswich and Rosewood railway line and the Chelmer railway station. The Albert Bridge and the Indooroopilly Railway Bridge join the railway to Indooroopilly. A pedestrian/bicycle bridge, alongside the road and rail bridges, also links Chelmer (on the Southern bank of the Brisbane River) to Indooroopilly.