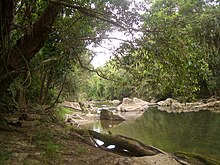 On the Liverpool Creek near Japoonvale (between Tully and Innisfail)

The Cassowary Coast Region is a local government area in the Far North Queensland region of Queensland, Australia, south of Cairns and centred on the towns of Innisfail, Cardwell and Tully. It was created in 2008 from a merger of the Shire of Cardwell and the Shire of Johnstone.

The Regional Council, which administers the Region, has an estimated operating budget of A$64 million.

Prior to the 2008 amalgamation, the Cassowary Coast Region consisted of the entire area of two previous local government areas:

The Hinchinbrook Division was created on 11 November 1879 as one of 74 divisions around Queensland under the Divisional Boards Act 1879. On 28 October 1881, the Johnstone Division split away from it. On 18 January 1884, the Cardwell Division also split away.[2] With the passage of the Local Authorities Act 1902, both Cardwell and Johnstone became shires on 31 March 1903.

In July 2007, the Local Government Reform Commission released its report and recommended that Cardwell and Johnstone merge. Cardwell was in particular opposed because Johnstone was rated as "financially distressed" and its council had just been sacked by the state government.[3] On 15 March 2008, the two shires formally ceased to exist, and elections were held on the same day to elect six councillors and a mayor to the Regional Council.

Although the commission recommended the council be undivided with six councillors and a mayor, the gazetted form was that of six divisions each electing a single councillor, plus a mayor.

The populations given relate to the component entities prior to 2008. The next census, due in 2011, will be the first for the new Region.

As part of preparing the Cassowary Coast Planning Scheme 2014, the council consulted with the region's heritage groups to compile a list of local heritage places.[10]