Bardon is an inner suburb of the City of Brisbane, Queensland, Australia.[4] It is located approximately 5 kilometres (3.1 mi) north-west of the Brisbane CBD. Bardon is a leafy residential suburb, much of which nestles into the foothills of Mount Coot-tha. In the 2016 census, Bardon had a population of 9,500 people.[1]

Bardon is located in the foothills on the eastern side of Mount Coot-tha, and is characterised by ridges separated by steep gullies. Some major streets generally follow the ridgelines, including Simpsons Road and Macgregor Terrace. The side streets connecting to these ridge-line roads are among Brisbane's steepest. Ithaca Creek, a tributary of Enoggera Creek, drains the eastern side of Mount Coot-tha and flows through the suburb in a generally north-easterly direction.[5]

The suburb is characterised by stand-alone houses on separate lots, which make up 89% of the housing stock in Bardon.[6]

The suburb of Bardon was originally known as 'Upper Paddington', until it was defined then renamed by the Ithaca Town Council in 1925[7][8] after "Bardon", the villa built by Joshua Jeays in 1863 and named for Bardon Hill in his native Leicestershire, England.[4] The house now forms part of the campus of St Joseph's Catholic Primary School, The Drive, Bardon.[9]

In June 1927, 25 allotments of "Wathana Estate" Upper Paddington were advertised to be auctioned by Isle, Love & Co.[13] A map advertising the auction described the sites as "High and healthy with magnificent views" as well as being only six minutes from the Paddington Tram Terminus.[14]

In June 1929, 42 allotments of "Laurel Estate" were advertised to be auctioned by T. Ozanne & Co.[15] A map advertising the auction states that the estate was handy to state and covent schools and that electric light, gas and water were available at the sites.[16]

Originally there was a house with large lands on Boundary Street, Rosalie (now Toowong), called "Rainworth" owned by Sir Augustus Charles Gregory, Surveyor-General of Queensland; it was named after the town of Rainworth near his birthplace in Nottinghamshire, England.[17] After his death in 1905, the house and land were sold.[citation needed] In the 1918 and 1925 the land was sold off for housing; see the 1925 land sale. The Rainworth Estate comprises land between Boundary Road and Rainworth Road south to Birdwood Terrace (formerly Heussler Terrace) and includes the streets of Barton Street, Dudley Street, Nestor Street (now gone), Osman Street (then Margaret Street), Rouen Road, Runic Street, and Vimy Street. The name persists through a school and local businesses. Although to this day, this locality name seems to be in such common use that they may not be lost at all, as many residents still associate their residence locations with this former locality name.[18]

Bardon has a number of heritage-listed sites, including:

The median age of the Bardon population was 36 years of age, 1 year below the Australian median.

The suburb is home to the Wests Panthers rugby league club, Wests Juniors Leagues Club (a rugby league club) and Brisbane Irish Rugby Football Club. These sports teams are located in Purtell Park where home matches are played. Club facilities are undergoing refurbishment as of 2007. In 2012 moved their headquarters to Purtell Park and have set up a vibrant community arts hub. There are now 400 children and young people who rehearse there weekly.

Bowman Park in Bardon is home to the Bardon Latrobe (soccer) football club, one of the oldest football clubs in Brisbane, and the West Brisbane Cricket Club. The park, formerly known as the 'Cobbler's Flats', was named after prominent Queensland Labor politician, David Bowman (1860–1916),[24] as were the adjacent David Avenue[25] and Bowman Parade.[26]

A small neighbourhood convenience shopping centre and various other shops and restaurants are located in and around Macgregor Terrace. 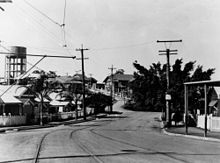 Prior to 1968, Bardon was serviced by a tram line which terminated at Morgan Terrace [Route 75]. The bus route has been extended from Morgan Terrace, past the Bardon State School, to terminate at Carwoola Street approximately 1.5 kilometres (0.93 mi) further out towards Mount Coot-tha.

Bardon is located on Metroad 5, a major north/south arterial that serves as a western bypass of Brisbane. Metroad 5 is known (from north to south) as Jubilee Terrace, Macgregor Terrace, an expressway-grade Boundary Road (1990s) and Rouen Road through the suburb where it continues into Frederick Street, Toowong. This route provides a link to both the Western Freeway/Centenary Highway (M5).

Notable people from or having lived in Bardon include: