Aspley is located about 13 kilometres (8.1 mi) north and about a half-hour drive north of the Brisbane central business district. It is positioned on flat ground south of Cabbage Tree Creek, centred on Little Cabbage Tree Creek and on the surrounding hills to the east and south.

Prior to European settlement, Australian aborigines of the Duke of York clan lived in the local area, though their main camping ground was further south in the suburb now known as Herston.[6] The Duke of York clan was part of the Turrbal tribe who occupied the area north from Logan River, south of the North Pine River, east of Moggill Creek to Moreton Bay.[7]

Soon after Brisbane was declared a free settlement in 1842, Europeans began exploring the lands north of Brisbane City. A northern route followed aboriginal tracks through what is now Kelvin Grove, Enoggera, Everton Hills, Albany Creek onto North Pine. This route is still known as "'Old Northern Road'" and "'Old North Road'" in places.

In 1857, the first land sales in the area east of the Old Northern Road and South Pine River begin under the control of New South Wales. Initially, the land was sold for farming and comprised the land around Cabbage Tree Creek, bordered by what is now Zillmere Road, Roghan Road, Bridgeman Road and the northerly continuation of Kirby Road, covering mostly what is now Aspley, Carseldine and Fitzgibbon. The land parcels east of what is now Hawbridge Street and Lacey Road were purchased by William John Ward.

The western land parcels were not sold. These land parcels were bordered by what is now Graham Road, Roghan Road, Hawbridge Street/Lacey Road and Bridgeman Road, and were subsequently subdivided into smaller land parcels and sold. This area is now known as Carseldine.

After the separation of Queensland from New South Wales in 1859, subsequent subdivisions were much smaller.

Originally known as Soldiers Flat and then Little Cabbage Tree Creek, the area became officially called Aspley in 1897. The name is believed to refer to the Aspley Orangery and Aspley Vineyard owned by John Morris in 1860s. Morris came from Nottinghamshire in England where there was an Aspley Hall.[5]

During the 1860s James and John Castledean, who owned land and a general store in the Bald Hills District, pushed a direct track from Bald Hills through to what is now the intersection of Gympie Road and Albany Creek Road.

In late October 1867 gold was discovered in Gympie, Queensland. By this time, a road from Brisbane City to Kedron Brook had been completed with the Bowen Bridge opened in 1860, permitting the northern track along Gympie Road and Albany Creek Road to be used as an alternate route to the Old Northern Road. However, neither road was of good quality. On 8 May 1868 the Government announced that it had allocated 2700 pounds to construct a trafficable, more direct, road to the Gympie goldfields. The new road came through Kedron Brook, Downfall Creek, Little Cabbage Tree Creek before heading to Bald Hills and North Pine. This road is now known as Gympie Road and travels a route very different from the original aboriginal track.

With increased traffic on Gympie Road, the Royal Exchange Hotel was established in 1875 opposite the intersection of Gympie Road and Albany Creek Road. It also operated as a general store for a while with Cobb and Co coaches passing on their way to the Gympie goldfields. In 1934, a second building was built south of the original hotel. The new building was called the "Aspley Hotel".

In the early 1870s, a vineyard was established by the Morris family on their property bounded by Maundrell Terrace, Gympie Road and Terrence Street. It was named the "Aspley Vineyard", after "Aspley Hall" in Nottingham, England. The vineyard operated for over twenty years. In 1897, Little Cabbage Tree Creek District was renamed Aspley.[8] 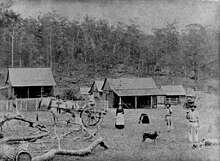 Matthew's Farm in 1887, which would become the site of Aspley State School

Little Cabbage-tree Creek State School opened on 6 August 1890. Before it was built, students would infrequently attend classes at the schools in Bald Hills or Zillmere. Initial sites for the new school were not approved by the Government before finally accepting the location on the corner of Maundrell Terrace and Horn Road. In 1897 the school was renamed Aspley State School.[9] In the latter part of the 19th century, Aspley was essentially a farming district. Additional industries were established to support the farming industry. In the 1880s, John Smith Booth established a bone mill and sawmill on Little Cabbage Tree Creek and Albany Creek Road. It later relocated to the current location of the former Aspley Acres Caravan Park and finally closed in 1932. In 1888, Huttons Pty Ltd established a meat processing plant in nearby suburb Zillmere. It contributed greatly to the local economy of Aspley, providing an alternative employment for farmers during poor seasons. A blacksmith operated on the northern corner of Gympie Road and Albany Creek Road until the 1920s. Several slaughter houses operated along Little Cabbage Tree Creek. 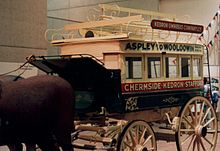 In 1912 the Kedron Omnibus company was formed by locals and ran local services to Wooloowin Station after previous services were cancelled as an aftermath of the 1912 transport strike.

The Royal Exchange Hotel (circa 1925) served as a Cobb & Co pickup point as the coaches did not change horses until Strathpine and "watering hole" for bullock teams.

After World War I and into the 1920s, Aspley experienced some growth in the number of businesses present in the district. Griffiths Sweet Factory operated on Gympie Road between 1930 and 1950 after shifting from Windsor. Hedges Dripping Factory operated near the reservoir on Lawrence Road. A brickworks was established by the Granville family on Brickfield Road during the 1930s.

In 1918 the local community hall was built on Gympie Road. A year later, movies were presented inside the hall. In 1950 the hall was sold to become St Paul's Anglican Church. The church was dedicated by Bishop Administrator John Hudson on 10 March 1963. It closed on 24 October 1981 as the land was resumed for road purposes.[10]

By the 1960s the growth of the local area necessitated building additional schools.

St Dympna's Catholic Primary School was established by the Sisters of St Joseph, opening on 24 January 1963.[9][11]

In May 2006 John Howard Amundsen was arrested for fraudulently obtaining more than 50 kg of explosives, causing an evacuation of a number of nearby residents.

In July 2008 Aspley's Bank of Queensland branch was destroyed by an explosion and fire in an attempted robbery.

Aspley is primarily accessed by Gympie Road, the primary artery in Brisbane's northern suburbs. Other primary roads are Albany Creek Road to the west and Robinson Road to the east.

In the 1961 Brisbane City Council Town Plan, the concept of a northern suburbs' expressway between Bowen Hills and Aspley was first proposed. The expressway would travel along the eastern side of Lutwyche Road to Park Road at Kedron, take a northerly route to Chermside and through the eastern side of Aspley, before heading north-westerly through Carseldine to connect with the Bruce Highway north of Bald Hills. The 1965 Wilbur Smith and Associates Brisbane Transportation Study recommended the additional construction of a Northwest Freeway between the Brisbane CBD and Aspley via the Grange and Everton Park.

The freeway system was to be constructed between 1965 and 1985 in four five-year stages. However, by 1972, opposition was voicing concerns about inadequate compensation for resumed properties, the housing crisis at the time, and neglected public transport. By 1975 the freeway plan had been abandoned due to community opposition and funding issues.

Land planning in the 1980s has protected the land corridor of the original Northwest Freeway between Alderley and Carseldine. The corridor is most obvious in the suburb running parallel to Trouts Road in the suburb's west. It is referred to as the Northwest Transport Corridor and remains in current planning standards as a four-lane median-divided road [1]. There is speculation that the corridor may form part of a western bypass road which will link the Western Freeway with the Bruce Highway. Another proposal has been for a light-rail system to connect Caboolture and Ferny Grove lines.

The median age of the Aspley population was 40 years of age, 3 years above the Australian median.

The Aspley Hypermarket, originally built by South African company Pick 'n Pay in 1984 (owned by Yu Feng and currently managed by Retail First), has a large presence in the suburb of Aspley. This shopping centre services the residents of Aspley, as well as surrounding suburbs of Carseldine, Zillmere, Chermside West, Taigum, Bridgeman Downs and Albany Creek. In 2012, the Pick 'n' Pay closed permanently and a Kmart department store and the first Coles superstore in Queensland opened on the site on 1 December 2012. In 2016/17, Aspley Hypermarket underwent a significant refurbishment and now has interior upgrades and a new food court, alongside a new façade and entry decoration. The shopping centre now has a Woolworths supermarket (added in 2017) in addition to Coles, Aldi, Sunlit Asian Supermarket and a fresh food precinct. Additionally, Aspley Hypermarket presents a mix of major chain and local specialty retailers and a large format Kmart.[citation needed]

Aspley also includes an abundance of car dealers and sidewalk shops along Gympie Road and the on Zillmere Road.

In December 2008 a shopping complex was opened on Robinson Road, called Aspley Village Shopping Centre, which replaced the old one that was closed down and demolished on the site in 2007. This new shopping centre, now open consists of a Coles Supermarket and approximately 25 specialty shops including Watt Realty, Newsagency, T-Bone Butchery, Stellarossa, Bossy Hair, Malof Group Chemist, Bargain King, Atune Hearing and convenience shopping with alfresco dining. The existing medical centre will also be expanding which will incorporate a gymnasium and aquatic soothing pool that has now been opened. There is also undercover parking for approximately 470 cars. This shopping centre is unique in Brisbane as the only centre to feature a direct entrance from the centre car park into the grounds of a state school - in this case Aspley East State School.

Aspley is serviced by a fortnightly visit by the Brisbane City Council's mobile library service at the corner of Gayford and Albany Creek Roads.[26]

Aspley is home to many denominations and other religious activities. Some of which are Aspley Uniting Church and a chaplaincy at Aspley State High and Aspley East State Schools.

Aspley is home to the Australian Football Club the Aspley Hornets (situated on Graham Road) and the Aspley Devils Rugby League club (located on Kirby Road).