Acacia Ridge is a southern suburb in the City of Brisbane, Queensland, Australia.[3] In the 2016 census, Acacia Ridge had a population of 7,429 people.[1]

Acacia Ridge is 15 kilometres (9 mi) south of the central business district. It is within the local government area of City of Brisbane.[4]

Primarily residential, Acacia Ridge is also known for its heavy industrial area in the suburb's east, occupying much of the suburb's area east of Beaudesert Road.

The name Acacia Ridge derives from the number of Acacia species growing in the area.[3]

In October 1884, 275 allotments of "Flemington Estate" were advertised for sale by T. Howling & Co.[5] A map advertising the sale states that the estate was close to the Coopers Plains railway station and that coaches passed the estate every day.[6]

The suburb was established after World War II to house returning servicemen and their families. Many of the original post-war dwellings still stand today.

Our Lady of Fatima Catholic Church was established on 5 acres (2.0 ha) on land on the corner of Beaudesert and Mortimer Roads in Coopers Plains which was bought in April 1949 from Arthur Harper for £2250 pound by the parish priest of Moorooka, Father Flanagan. He also arranged for an old army hut to be relocated from the Archerfield Airport to the church site and spent £720 converting the building into a church. The church was officially dedicated on Sunday 26 March 1950 by James Duhig, the Archbishop of Brisbane, with about 150 people attending. Two further army huts were relocated to the site. One of them was used to establish Our Lady of Fatima Primary School which opened on 25 January 1954. At its opening the school had 78 pupils taught by two Sisters of St Joseph led by Sister Ibar. On 5 June 1966, Archbishop Patrick Mary O'Donnell opened the new brick church building. On 24 January 1971, the new school was officially opened by Bishop Kennedy with 8 classrooms, an office, a staff room and a sick room. By that time there were 260 students and 7 staff.[7][9]

St Alban's Anglican Church closed circa 1980.[10] The church building relocated to the Anglican Church of the Holy Spirit in neighbouring Algester to be used as a parish hall.[11]

The Aboriginal and Islander Independent Community School (also known as The Murri School) was opened 1 January 1986 in a disused Catholic primary school in Highgate Hill. In 1995 the school relocated to a disused state school in Milton. In 1997 the school obtained its current site in Acacia Ridge.[7][12][13]

From 1966 until the mid-1980s, Acacia Ridge accommodated one of Holden's main vehicle manufacturing plants, which produced both full-sized and smaller models including the Holden Gemini. When local production of the Gemini ceased in October 1984, the manufacturing plant closed down.[17] The manufacturer remained, retaining a small area of the site for its regional headquarters until the early 2000s, when it relocated to Murarrie. Since closure of the plant, Woolworths occupied the area, utilising its space as a regional distribution centre until recently, when an independent retail grocery chain resumed the site for similar purposes.

On the opposite side of Beaudesert Road from the former manufacturing plant, Toyota has based its southern Queensland regional headquarters. This site is primarily used for managerial and distribution related duties, as opposed to vehicle production.

Acacia Ridge is home to one of Queensland's largest railway freight yards, dealing with interstate freight and the break-of-gauge from 1,067 mm (3 ft 6 in) to 1,435 mm (4 ft 8 1⁄2 in). In 2008, the Beaudesert Road level crossing was replaced by an overbridge, so that the sidings in the yard could be extended for the shunting of longer 1500 m trains.[18] Because space is not available for all potential users of this yard, another hub at Bromelton has been proposed. In 2009, the line between Acacia Ridge and Bromelton was converted to dual gauge to suit a break-of-gauge hub at Bromelton. Acacia Ridge also borders one corner of Archerfield Airport; a small, privately owned airport. 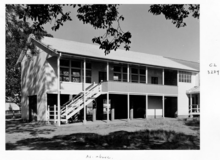 Acacia Ridge is home to one of Brisbane's few ice skating rinks, Iceworld.[27] 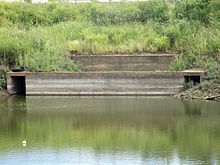 Acacia Ridge has a number of heritage-listed sites, including: