Inala is a suburb in the City of Brisbane, Queensland, Australia.[3]

Inala is 15 kilometres (9.3 mi) south-west of the Brisbane CBD.[citation needed]

Inala Avenue/Poinsettia Street is the main roadway east–west and Serviceston Avenue/Rosemary Street and Blunder Road are the main roads stretching north–south. Newer estate Forest Lake is situated to the south; other surrounding suburbs include Durack, Darra and Oxley to the north; Richlands, Ellen Grove and Wacol to the west; and Willawong, Acacia Ridge, Pallara and Doolandella to the East.[citation needed]

The suburb was named Inala by the Queensland Surveyor-General on 10 January 1952, using a Bundjalung word meaning resting time or night time. It was previously known as Boylands Pocket.[3]

Following World War II there was a shortage of 250,000 houses across Australia. In Queensland alone over 4,000 families were living in makeshift dwellings of tin, calico and canvas. The Queensland and Australian Governments responded by making housing a priority.[citation needed]

The history of Inala started as the suburb of Serviceton, established following a meeting held in a Brisbane RSL Hall in May 1946. A group of ex-servicemen, led by Harold (Hock) Davis, were seeking affordable accommodation for their families during the post-war housing shortage. The Serviceton Co-operative Society was formed and they purchased 480 hectares of flood-safe land, which was then divided amongst the shareholders, giving them 800 square metres each. At that stage, Inala was planned as a satellite town set on a broad, high, gently sloping ridge.[citation needed]

In 1949–1950 the Queensland Housing Commission purchased Serviceton, comprising approximately 850 acres (3.4 km2) of land, from the faltering Serviceton Housing Co-operative. The Housing Commission subsequently annexed another 200 acres (0.8 km2) to the suburb and changed its name to Inala in 1953 to avoid postal confusion with another Serviceton in Victoria.[citation needed]

The development of Inala coincided with the emergence of architectural modernism in Australia. The innovative designs of young southern architects such as Robin Boyd, Roy Grounds and Harry Seidler featured the efficient use of space with minimal ornamentation, utilisation of new materials and techniques, and above all design simplicity, while striving to build solid houses that would require little maintenance. Inala was designed and built in Modernist Revival style with elements of Art Deco. It was both aesthetically successful and a practical architectural solution.[citation needed]

The post-war worldwide shortage of building materials coupled with huge demands created the impetus for exploring and using new materials and techniques in Inala. The choice to use reinforced concrete in the construction of Inala houses was made because of its strength, reliability and flexibility. Inala also had the advantage of good access to the local cement and concrete made from washed river sand and lime from Moreton Bay coral shipped up the river by barge and processed at Darra. Concrete was an ideal material for the fashionable Modernist style. Inala houses were built on raised concrete foundations, framed with hardwood timber, floored with hard-wearing brushbox, with silky oak used for window frames. The outer walls were constructed of poured concrete approximately 18 cm thick, internal walls and ceilings – with rendered wire lath. These robust construction techniques also served to minimise maintenance costs and achieve a long life span of the houses.[citation needed] 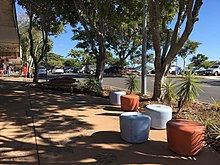 There are several shopping precincts within Inala. The joined Inala Plaza–Civic Centre complex located on the corner of Kittyhawk and Inala Avenues is the largest precinct in Inala. It offers two major supermarkets, Vietnamese markets, restaurants, and a wide variety of independent shops. Other shops and restaurants exist on Biota Street located to the north, on Skylark Street to the east, and on the junction of Lavender and Lilac Streets. Richlands Plaza shopping and business centre opened on the border of Inala and Richlands in 2010 and offers a major supermarket, adjacent shops, services, cafes and a gym.[citation needed]

Inala has two post offices, numerous medical centres and services, many of which are bulk billing, two community halls, and a community art gallery.

There are a large number of government funded and non-government non-profit community organisations and programs located in Inala, some of these include Inala Community Centre, Hub Neighbourhood Centre, Inala Community House, Skylarkers Healthy Ageing, Western Districts Out of Home Care, Inala Youth Service, Western Districts Family Steps, Childcare Access, Equity Resource Support Unit. Most government services are located within the Inala Plaza precinct and its surrounds. These include a Brisbane City Council Library,[9] Department of Communities, Department of Corrective Services and a Medicare and Centrelink office. The Inala Library opened in 1963 with a major refurbishment in 1994 and a smaller renovation in 2011.[10] 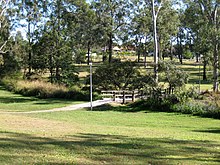 Inala has a high ratio of green areas and parks,[11] most of which are named after prominent people who helped establish the suburb or contributed to the community. The parks and the large numbers of grown native trees through the suburb maintain the ecosystem of Inala, quiet environment and clean air.[12]

Inala has a very good access to Ipswich Motorway, Centenary Motorway and Logan Motorway, and further to Warrego Highway and Cunningham Highway.[citation needed]

Les Bryant, former ALP Richlands Ward Councillor, represented Inala in the Brisbane City Council for 17 years, 1991–2008.[20] The Bryant family moved onto Blunder Road late 1946, when there was nothing but bushland where Inala now stands. They saw Inala grow from early beginnings to what it is today, a mature, successful multi cultural local community. Les and his wife Margaret still live in the Inala district today in retirement, in sister suburb Durack. Les was succeeded by Milton Dick (Australian Labor Party A.L.P.) in 2008, who moved into Federal politics winning the Federal Division of Oxley in 2016. Charles Strunk (ALP) won the renamed old Ward of Richlands, now Forest Lake Ward, in 2016, to become the new Brisbane City Councillor for Forest Lake Ward.[21][22] Annastacia Palaszczuk (ALP) is the Member of the Queensland Legislative Assembly for Inala; she became Premier of Queensland in 2015.[citation needed]

Inala has its own not-for-profit community group — "Richlands, Inala and Suburbs History Group" — dedicated to the research of local history and diverse cultural heritage, historical presentations and book publications on the topics of local history, community and culture.[24]

Other churches and religious places in the suburb include: