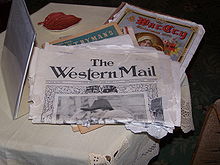 7 April 1927 edition, with the Countryman behind

The first Western Mail was published on 19 December 1885[1] by Charles Harper and John Winthrop Hackett, co-owners of The West Australian, the state's major daily paper. It was printed by James Gibney at the paper's office in St Georges Terrace.

In 1901, in the publication Twentieth century impressions of Western Australia, a history of the early days of the West Australian and the Western Mail was published.[2]

In the 1920s The West Australian employed its first permanent photographer Fred Flood, many of whose photographs were featured in the Western Mail.[3]

In 1933 it celebrated its first use of photographs in 1897 in a West Australian article.[4]

The Western Mail was primarily created to provide farmers with up to date information. However, for many women in the most isolated areas of the state it represented their only social connections beyond their families. The women's and children's sections became popular and often attracted the most revenue for the paper.[8]

West Australian Newspapers management experimented with a variety of formats in the late 1940s and early 1950s, including the Weekend Mail for five years (see publication details below).

However, the name Western Mail was recycled for a last Christmas Annual in 1956.

In 1980 the name was resurrected for a new weekly, published by Western Mail Limited. The push for a new paper was made by Robert Holmes à Court and Bell Group following his failed takeover attempt of The Times (UK). 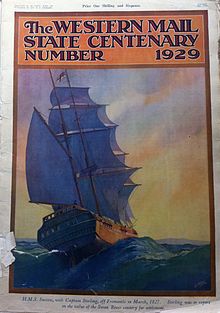 Most dates are derived from the entries in the State Library's reference catalogue: