Cowaramup is a town in the South West of Western Australia, 12 kilometres north of Margaret River in the Shire of Augusta-Margaret River.

The name Cowaramup derives its name from Cowaramup Siding, which was located near the townsite, on the now disused Busselton to Augusta railway. The townsite was gazetted in 1925, originally to support the timber and dairy industries. The name is believed to be derived from the Noongar word cowara, meaning purple-crowned lorikeet.[2] Locals from the region often refer to the town as "Cowtown", a reference to the use of "cow" in the town's name and its history of dairy farming.

Cowaramup is roughly central to the Margaret River wine region. It is the closest townsite to a number of wineries and other speciality producers, including Vasse Felix, Howard Park and Madfish Winery, the Margaret River Chocolate Factory, and The Margaret River Dairy Company. The town is close to Cowaramup Bay, a popular swimming and surfing beach. As such a large number of tourists to the region pass through and visit the town, playing an important role in the local economy.

The town centre consists of a local store providing basic produce, a post office, a bakery, a fruit and vegetable shop, a real estate agent and farm agency, a service station/workshop, a liquor store, a social club, parkland and various speciality stores selling everything from gourmet produce, candies and arts and crafts to computing goods. Accommodation in or near the town consists of the Taunton Farm Caravan Park, a bed and breakfast and various chalets and cottages in the area. There is one restaurant and two cafes in the town as well as numerous others on nearby winery properties. The town has one primary and pre-primary school, a town oval and tennis club, BMX track and a bowling green. The nearest high school and university campuses are in Margaret River. Police and fire services are based in Margaret River and Busselton.

Cowaramup is located on the Bussell Highway, which serves as the major link to other towns in the area, as well as Perth, the state capital.

The area around Cowaramup is predominantly agricultural/viticulture use, but over the last five years many land releases have proven popular for the many young families and tradesmen who benefited greatly from the building boom in 2005-06.

The Cowaramup Bombora ("Cow Bombie") big wave surf break, located 2 km offshore, was the location of two Oakley Biggest Wave award-winning rides; in 2011 by Damien Warr,[3] and 2015 by Jarryd Foster.[4] On 26 June 2015 Australian surfer Felicity Palmateer, 22, became the first female to surf Cow Bombie, on potentially the largest wave ever ridden in Australia by a woman.[5][6] 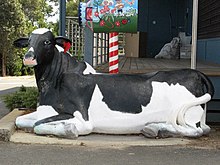 A permanent cow-themed tourist attraction is the golden cow statue. Created by local artist Ron Roozen in 2010, “Free As A Cow” is located in Pioneer Park and is locally known as “Rump On A Stump” (a pejorative counterpoint to the "chick on a stick" statue installed in front of the Robert Oatley Winery cellar door, a few kilometres north of Cowaramup).[12][13]