Texas is a rural town and locality in the Goondiwindi Region, Queensland, Australia.[2][3] It is on the border of Queensland and New South Wales.[4] In the 2016 census, Texas had a population of 843 people.

The town is located just 2 kilometres (1.2 mi) from Queensland's southern border with New South Wales, close to Bonshaw, New South Wales. The locality across the New South Wales border is also known as Texas, having a shared history as being part of the Texas pastoral run.[2][5]

Bigambul (also known as Bigambal, Bigumbil, Pikambul, Pikumbul) is an Australian Aboriginal language spoken by the Bigambul people. The Bigambul language region includes the landscape within the local government boundaries of the Goondiwindi Regional Council, including the towns of Goondiwindi, Yelarbon and Texas extending north towards Moonie and Millmerran.[6]

Texas sits on Bigambul land, the Indigenous people of the region inhabited the area for thousands of years prior to colonisation in the 1840s.[7]

The origin of the town's name is generally regarded as a reference to a territorial dispute. The land in the area was first settled by the McDougall brothers, who found squatters there on returning from the goldfields. Once their legal right to the land was recognised, they named their property in honour of the rather more famous dispute between the United States and Mexico over territory in Texas, USA.[2]

Texas was connected by the Texas railway line from Inglewood in November 1930 with the town being served by the .[9] The line was closed in 1994.

Up until about 1986, tobacco farming was an important industry in the area and many Italian families settled the area to run and work the tobacco farms.

Farming is the dominant industry in the Texas region, although there is also a silver mine. A large cattle feedlot is located about 20 min from town.

Part of the Goondiwindi Regional Council, Texas is administered from the nearby larger town of Goondiwindi, Queensland. 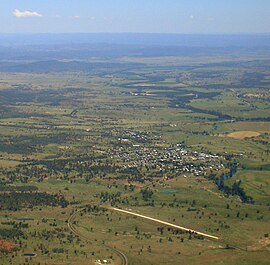 Texas has a state school called Texas State School,[13] which caters to students from Prep Year to Year 10.

Texas is serviced by the , Warwick Daily News and Stanthorpe Border Post newspapers. Texas is served by the Border Districts Community Radio Station 89.7 Ten FM which is transmitted from a 4 kW transmitter located on Mt Mackenzie Tenterfield NSW.

After a visit to Texas in 2002, and being involved in a car accident nearby, American Country/Rockabilly recording artist memorialised the town in a song TX, QLD, Australia. The song was included on the ' 2004 debut album entitled Music to Haul By.

Previously, James Blundell had written and recorded a song entitled Texas as the B-side of his first single on the EMI label (EMI 2165), Cloncurry Cattle Song. On the single the writing credits of the two songs were inadvertently switched, but corrected on Blundell's debut, self-titled album (1989). Texas was composed by James Blundell and Doug Trevor, with Blundell and M. Hickson writing Cloncurry Cattle Song.

Lee Kernaghan also referenced the town in his 2002 hit song from his Electric Rodeo album released in 2002.

The Goondiwindi Regional Council operates a public library in Texas at High Street.[16]

The Texas branch of the Queensland Country Women's Association has its rooms at 27 Broadway Street.[17]

As of 2013 Texas is serviced by two petrol stations. The Shell Branded service station sells both regular and premium (greater than 95 octane) unleaded petrol. The BP service station, whilst not displaying BP signage does accept BP account cards. The BP does not sell premium unleaded.