The town is situated on the eastern side of the Darling Downs and the Toowoomba Region local government area. Oakey Creek, a tributary of the Condamine River, passes through the town. In January 2011 the Oakey Creek flooded, impacting 120 homes and businesses. In 2014 a Flood Early Warning System was installed upstream. It is surrounded by farms, and an open cut coal mine is located at Acland, 10 km north of the town. 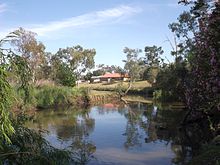 Jarowair (also known as Yarowair, Yarow-wair, Barrunggam, Yarrowair, Yarowwair and Yarrow-weir) is one of the languages of the Toowoomba region. The Jarowair language region includes the landscape within the local government boundaries of the Toowoomba Regional Council, particularly Toowoomba north to Crows Nest and west to Oakey. Giabal is the Southern neighbour in Toowoomba City.[4]

Oakey and the creek around which the town is located, were named for the river oaks that dominate the banks of the creek.[5] Originally named Oaky, the spelling of Oakey was officially adopted in August 1940.[2]

The area was first settled in the early 1840s when pastoralists moved into the area and found the land to be suitable for grazing. The building of the Western railway line through the area prompted the growth of a township to service the pastoral community. Growth of the town was slow, however, featured some enterprising ventures, including a short-lived meatworks near the town, which planned to tin and export kangaroo and wallaby under the marketing name 'Australian Game'. The enterprise was unsuccessful and closed down in 1876.

In 1859, the Jondaryan Woolshed was built to the west of the town to service the rapidly growing wool industry.[6] The first shearing took place in 1861. The Jondaryan pastoral station dominated the area, encompassing over 400,000 acres (1,600 km2). The Woolshed was responsible for over 200,000 head of sheep and could cater for in excess of 50 shearers working simultaneously. Following World War I, the homestead landholding was reduced and separated to allow for soldier re-settlement programs.

The railway reached Oakey and Jondaryan in 1867.[7]

"A grand picnic and ball was held here on the 3rd instant in honor of the opening of the above school. The school-house is a neat weatherboard building, shingled, and with a verandah on each side, and capable of accommodating between sixty and seventy children, and will amply supply the requirements of the district for years to come. The teacher's residence is a smart little four roomed cottage, but I should think rather small. The appointment of Mr. Tait as teacher is sure to give satisfaction."[10] 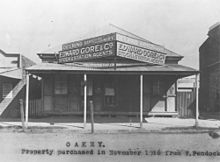 The National Bank in Oakey in 1916

In early 1919, a new Catholic parish called St Monica's was established with Oakey at its centre. The first priest was Rev. Father Denis Matthew O'Keefe. He relocated the church to a more elevated 5-acre (2.0 ha) site and enlarged the building so it could be used as a church and a school.[12] St Monica's School opened on 1919 and was operated by the Sisters of the Good Samaritan.[9][13]

The War Memorial in Oakey, Queensland, Australia, built to commemorate the First World War and inscribed with the names of over 300 locals who served in the war.

There is a war memorial in Campbell Street, erected after the World War I, and at that time, made "of Rockhampton marble on a pedestal of sandstone, with a polished granite centre piece, on which are inscribed in gold letters the names of no fewer than 332 soldiers of the Oakey district who took part in the Great War."[5] The memorial was unveiled on 28 August 1922 by the Governor of Queensland, Sir Matthew Nathan.[14]

The racehorse Bernborough was foaled at Rosalie Plains in 1939.[16] He became well-known on the tracks around Toowoomba.[17] Eventually the horse was sold to a businessman in Sydney and raced in three states, winning 15 consecutive races between 22 December 1945 and 19 October 1946.[16]

During World War II the requirement for aircraft maintenance and construction exceeded the capabilities of Brisbane-based facilities. To expand the capability, a 934-acre (378 ha) site at Oakey was purchased to facilitate the raising of Number 6 Aircraft Depot (6AD). An airbase was sited approximately 2 miles (3 km) north of the town, and runways were built. With a full complement of RAAF personnel, the base housed almost 2,000 troops. The Depot serviced, assembled and conducted test flights of Bristol Beaufort, P-51 Mustang, Norsemen, CAC Wirraway and Supermarine Spitfire aircraft. This airfield became an Army Aviation Training Centre in the 1970s, now Swartz Barracks, a major helicopter pilot and maintenance training facility for the Defense forces.

In 1975, Jondaryan Woolshed Historical Museum and Park was established to present the history of Jondaryan Station and its role in the development of pastoralism on the Darling Downs. The woolshed has been in continuous operation since it was built.

The Cooyar railway line serviced the areas to the north of Oakey between 1913 and 1968. Between 1914 and 1984 the area to the southwest was serviced by the Cecil Plains railway line.

Oakey State State High School opened on 28 January 1964.[9][19] As early as 1916 there had been community interest in the establishment of a high school in Oakey, with the disadvantage of "scholars having to reside in Dalby, Warick, or Toowoomba, after passing the examination" acting as a deterrent to many parents from pursuing higher education for their children.[20] It celebrated its 50th anniversary in 2014.[21]

The Oakey Power Station is a 332 MW dual liquid/gas-fired plant and was commissioned in December 1999.[23]

In 2014, The Department of Defense investigated a contamination caused by fire-fighting foams used at the Army Aviation Training Centre and warned residents not to drink bore water.[25] The chemicals have been identified as perfluorooctane sulphonate and perfluorooctanoic acid.[26] The chemicals were used from 1970 until 2008.[27] A lack of testing of these chemicals means no conclusive impact on human health has been proven.[27]

Oakey has been part of Toowoomba Regional Council since 2008. However, like many small towns in regional Queensland it has been administered by various local government entities over its history.[28]

The town is bypassed by the Warrego Highway (National A2), and is also on the main rail link connecting Brisbane and Toowoomba with south-western Queensland.

Oakey is connected to Toowoomba and Brisbane by bus. The town is serviced by the Oakey railway station on the Western railway line. The airport, which primarily functions as the Oakey Army Aviation Centre is located on the site of the original World War 2 airbase. It was serviced by Macair Airlines commercial air services originating in Brisbane, however the failure of Macair saw services commenced by Skytrans Airlines being routed via Toowoomba. The establishment of the Wellcamp airport south of the town, servicing Toowoomba, saw Skytrans being replaced by Qantaslink and REX airlines, and the reduction of airspace for the Army Aviation Centre.

Industry is rural based, processing livestock and grain. The district has a high concentration of cattle feedlots, one Abattoir, a stockfeed manufacturer, grain trading and transport businesses. There are coal mining operations in the surrounding district, and businesses servicing the coal seam gas (CSG) industry further west have set up. The main town centre was redeveloped during 2005 by the council and now includes new shops, landscaping and tree plantings. The township also provides services for agricultural and mining activities in the local area. The Oakey Veterinary Hospital was established in 1952 and has developed a Specialist Equine Reproduction Centre.[30]

Machine shearing at Jondaryan on the Darling Downs

The township has many amenities, including an Olympic-sized swimming pool and golf course. The golf course is located at the corner of the Warrego Highway and Mount Tyson Road.

There are several motels and hotels in town providing accommodation, as well as a caravan park catering for tourists.

The local RSL (Returned Services League) Club provides convention-style facilities, and is the hub of the war remembrance activities for the local area on Anzac Day and Remembrance Day.

The town has well-established daycare and pre-school centres.

Oakey has a local hospital providing emergency services and inpatient care as well as a large co-located nursing home facility known as the EAF McDonald nursing home. There are two private GP practices in the town.[31]

The Oakey Library is located in the Oakey Civic Precinct at 60 Campbell Street between the swimming pool and the Community Centre. It boasts a 500-seat capacity Cultural Centre, and two multi-purpose sports halls at the two primary schools.[32]

The Oakey branch of the Queensland Country Women's Association meets at the Kenmore Library at the Anglican Church Hall at 5 Creek Street.[33]

Oakey State High School is a government secondary (7-12) school for boys and girls at 1 Campbell Street (27°26′42″S 151°43′09″E﻿ / ﻿27.4450°S 151.7193°E﻿ / -27.4450; 151.7193﻿ (Oakey State High School)).[34][38] In 2017, the school had an enrolment of 458 students with 46 teachers (42 full-time equivalent) and 32 non-teaching staff (23 full-time equivalent).[36] It includes a special education program.[34] In response to a skills shortage in transport and logistics Oakey State High School developed an innovative program called "Transport and Logistics Employees for our Community". In 2007, the successful partnership between school, training organisations and industry was recognised as the winner of the Showcase Award for Excellence in Community or Industry Partnerships by the Department of Education, Training and Employment.[39]

The University of Queensland has a campus for Equine Studies in the town.[31]

The Oakey Army Aviation Centre located at the airport, also includes the Museum of Australian Army Flying, which displays aircraft and memorabilia dating from World War I to the present.

The Jondaryan Woolshed is open to visitors.

Oakey has been regularly mentioned on the Australian soap opera, Neighbours, with characters both originating from the town and moving to the town. One of the most well-known Oakey residents was Drew Kirk, and the town served as an important location for him and his family. In the 2001 season finale, Libby Kennedy went into labour in a barn while Drew and Stuart Parker were at a rodeo. Then, in 2002, Drew Kirk was thrown from a horse, sadly dying as a result. The Kirk family was revisited in 2018 when Drew’s son Ben visited the town to try and connect with the father he never knew. He is offered a job at his uncle’s garage and leaves his home in Erinsborough.