Mitre 10 is an Australian retail and trade hardware store chain. Operations are based on a cooperative system, where the store owners are members of the national group and each has voting rights. The chain name references the mitre joint.[3] There are over 400 "Mitre 10" and its associated "True Value Hardware" franchises throughout Australia. 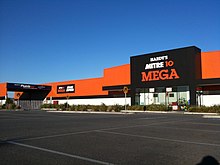 The move to set up a co-operative group of hardware stores originated from a meeting of seven men who would become Mitre 10's founders – Tom Molomby, Tom Danaher, Reg Buchanan, Jack Womersley, Ian Nisbet, Bill Davey and Bill Wilson – held at Buchanan's home in Balwyn, Victoria, on 29 June 1959.[4] This move occurred specifically to maximise funds and energy with regards to advertising and promotions and to demonstrate that independent operators offered service, advice and competitive prices.[3]

The new company soon expanded operations, with fifteen New South Wales members joining the group by February 1961. Queensland soon followed with seven retailers, under the chairmanship of Arthur Scurr, joining the cooperative in January 1962, followed by a further sixteen members from Newcastle in October the same year. With the company successfully operational in the three Eastern states of Australia by the end of 1962, South Australia and Western Australia soon started running their own state-based co-operatives, and attention turned to crossing the Tasman.[5]

In late 2008 Woolworths Limited and Mitre 10 Australia held talks on the potential acquisition of the company. The Australian Financial Review reported that Mitre 10 Australia had held talks with other companies since beginning to find a major buyer or investor, although in early 2009 Woolworths decided the company structure was too complex for a takeover. Mitre 10 Australia was believed[by whom?] to be in talks[when?] with Metcash Trading, supplier of IGA and various liquor stores; UBS analysts said Metcash had been on lookout for a "fourth pillar" for some time to add to its operations, and that Mitre 10 might be perfect.[7]

In late 2009 Mitre 10 Australia announced that they were searching for a major investment or buyer. On 27 November Metcash (ASX: MTS) released a statement to the ASX with a proposal for Metcash to take 50.1% in the Mitre 10 Hardware Group for A$55 million cash injection.The deal proposed giving Metcash the right to buy the remaining 49.9% in the company at the end of 2012 or 2013 with an amount based on the earnings. Mitre 10 Australia would remain a standalone entity headed by Mark Burrowes. In March 2010 98% of Mitre 10 Australia shareholders voted in favour of the Metcash bid.[8] Metcash acquired the rest of Mitre 10 in 2012.[9]

Mega is Mitre 10's "destination hardware," or "big-box," chain; it is designed as a one stop shop for big projects, to compete with Bunnings Warehouse. The main focus of the Mega is customer service, it markets itself as "All the help you need", stores have customer service attendants stationed in different departments of the store i.e., plumbing, trade building supplies (timber), paint, the majority of these have a trade qualification.[10] Mitre 10 Australia opened its first Mega in June 2004 at Beenleigh, Queensland.[6]

In 2007, seven Mega stores operated across Australia: one in Queensland, one in South Australia and five in Victoria. Mitre 10 Australia originally had planned to have 50 MEGA stores open, or have store owners renovate from other store types, across the country in metropolitan and regional hubs by the end of 2009.[11] As at August 2009 three stores have closed. The Ringwood, Victoria store closed due to financial difficulty, with the store employing over 130 people,[12] while the Campbellfield, Victoria store was closed in March 2009 due to the building having structural problems, the store employed 54 people, with the closure staff were redeployed to other stores.[13] The Modbury, South Australia Mega store was bought by Wesfarmer's Bunnings Warehouse in January 2007, the store employed 100 people.[14][15] Hardy's Mitre 10 Mega in Pakenham, Victoria being the only store redeveloped from a smaller Mitre 10 Home and Trade store, still trading, with plans to expand.[16] The Mega store in Lilydale, Victoria closed in late 2009, being the last Mitre 10 Australia corporate store.