Dalby /ˈdɒlbi/[2] is a town and locality in the Darling Downs region of Queensland, Australia.[3][4] Dalby is within and is the administrative centre of the Western Downs Region. At the 2016 census, Dalby had a population of 12,719.[1]

Dalby is approximately 208 kilometres (129 mi) west northwest of the state capital, Brisbane, at the junction of the Warrego, Moonie and Bunya Highways.[5] and the centre of Australia's richest grain and cotton growing area.[5]

Dalby was founded in the early 1840s at a place known locally as "The Crossing" on Myall Creek, a tributary of the Condamine River. The first settler was Henry Dennis, who explored the region and chose land for himself and others in the locality.[7] Today an obelisk in Edward Street denotes the location where Dennis camped.[5] A small settlement was founded to assist travellers heading north to nearby Jimbour Station. The explorer Ludwig Leichhardt visited the area in 1844, on his way to Port Essington.[8]

In February 1853, the New South Wales government sent the Deputy Surveyor General Captain Samuel Perry to the area to survey a township. In August of the following year, Mr Charles Douglas Eastaughffe arrived with a document under the Seal of the NSW Government officially proclaiming 'Dalby' a township. Mr Eastaughffe was later appointed Chief Constable and remained in Dalby until his retirement.[9]

The name of the town is believed to come from the village of Dalby on the Isle of Man and reflects immigration from the Isle of Man in the mid-19th century.[7] The name was apparently chosen by Captain Samuel Perry when he surveyed the settlement in 1853.

In 1859, Dalby became part of the new Colony of Queensland.

In August 1863 Dalby was officially proclaimed a municipality, the Borough of Dalby, in the Queensland Government Gazette.

Dalby Non-Vested School opened as a Roman Catholic girls school in 1864 and in 1866 became a non-vested school (the teachers' salaries were paid by the Queensland Government but the government did not operate the school). Circa 1880, the school either closed or continued without government funding.[11]

On Sunday 20 June 1869 the first Presbyterian church was opened in Dalby.[14] Reverend George Grimm had conducting regular services since 1865.[15]

St Columba's School was a Catholic primary school which was opened in 1877 by the Sisters of Mercy. In 2008, it merged with St Mary's College to create Our Lady of the Southern Cross College.[11]

Dalby was believed to have a healthy climate and in 1900 the Queensland Government built the Jubilee Sanitorium for consumptive patients. In 1904 the Dalby Town Council erected therapeutic thermal baths using artesian water from a local bore for those wishing to improve their health by "taking the waters".[16] In 1938, the council closed the artesian baths as interest in "taking the waters" was declining. Medical opinion became increasingly doubtful of the benefits of bathing in mineral waters, favouring drugs and physiotherapy as better treatments.[17]

The Dalby War Memorial was unveiled by the Queensland Governor, Matthew Nathan, on 26 July 1922.[19] 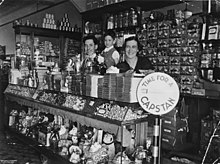 Inside the Paragon Cafe at Dalby, Queensland, ca. 1936

The Paragon Cafe was purchased in 1935 by Milton (Miltiadis) Dimitrios Samios part of the cultural phenomenon of Greek cafes in Queensland. Paragon Cafe employed three men and six women with taking increasing from 90 pounds to 200 pounds within the first year of trading.[20]

St Mary's College was a Catholic secondary school opened on 21 January 1963 by the Christian Brothers. In 2008, it merged with St Columba's School to create Our Lady of the Southern Cross College.[11]

Dalby has a number of heritage-listed sites, including:

Dalby has a humid subtropical climate (Cfa in the Köppen climate classification) and being located just to the west of the Great Dividing Range it is hotter and less humid in summer and colder and drier in winter than nearby locations on the other side of the range. Dalby has had a recording weather station since 1893, but that was replaced in 1992 by another station at the Dalby Airport. The town's highest recorded temperature was 45.6 °C (114.1 °F) on 4 December 1913, while the coldest was −7.2 °C (19.0 °F) on 5 July 1895.[32] The annual rainfall is 681.2 mm (26.8 in), the majority of which falls as thunderstorms in the summer months.

Industry in Dalby includes large-scale engineering, coal mining, and fuels (ethanol). Dalby is the centre of a diverse and productive agricultural area with rich black soil allowing the production of crops such as wheat, cotton and sorghum. Livestock raising including pigs, cattle and sheep is also popular. Two cotton gins are situated within 10 kilometres (6 mi) of the town.

Dalby is to be the site of the first dry mill grain-to-ethanol plant constructed in Australia (the first plant built specifically for the production of ethanol for fuel since the Second World War).[36]

The local area is developing an energy-based economy with a large coal-fired power station and a number of coal mines and natural gas bores being established to the west of Dalby. A local company has been awarded a contract to establish wind turbines on adjacent farm land.

Approximately 50 kilometres (31 mi) west of Dalby is the Kogan Creek Power Station. This A$1.2 billion project is a 750-megawatt coal-fired power station, with adjacent coal mine being developed at the small town of Kogan, which is roughly equidistant between Dalby, Chinchilla, and Tara.

The opening of a shopping centre at the northern end of Cunningham Street has brought new life to the Dalby CBD. Dalby Shoppingworld includes Woolworths, Big W, Amcal and other specialty shops.[37]

Dalby's Water Treatment Plant uses a state-of-the-art reverse osmosis process provided by two plants. The first Reverse Osmosis plant, which opened in 2004, was the first in Queensland.[38] The second and larger plant opened in 2011.[39] Water and sewerage treatment services are provided by Western Downs Regional Council. The town has made a ground-breaking deal with nearby gas companies by taking water from gas fields. It has been noted that the town will have a definite water supply for at least another 30 years, taking into account demographic trends.

Dalby's population has been increasing rapidly recently with many new estates created and subdivisions made.[40] Some notable new estates include Sunnyside Estate, Heritage Gardens, Callistemon Park and a new estate on the Warrego Highway side of Sandalwood Avenue.

There are two locally published newspapers including the Dalby Herald and Northern Downs News, as well as the Dalby Magazine. Dalby also has its own community radio station, 88.9 4DDD which was founded on 26 January 1992.

Dalby receives most commercial and ABC radio and television services from Toowoomba, the nearest regional city. Local news stories from Dalby and other Western Downs communities is often featured on WIN News, a regional television news bulletin compiled in Toowoomba.

Dalby Library has 2 Creative Studios which have the latest in content creation tools, professional equipment and software, music production and recording, and digital production and editing to help create and share projects.[55] 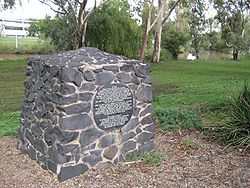 Dalby has a monument to the Cactoblastis cactorum in a park by the Myall Creek which runs through the town. The Argentinian caterpillar successfully eradicated the prickly pear in the 1920s.[5]

There is also the Dalby Cemetery, a monumental cemetery.

This Wikipedia article incorporates text from PARAGON CAFÉ, DALBY (20 September 2019) published by the State Library of Queensland under CC-BY licence, accessed on 15 January 2020.