Bell is a rural town and locality in the Western Downs Region, Queensland, Australia.[2][3] It is in the western foothills of the Bunya Mountains, 39 kilometres (24 mi) north of Dalby. At the 2016 census, Bell had a population of 502.[1]

Bell is on the Bunya Highway and lies between the agricultural areas of the Darling Downs and the South Burnett with rolling hills of quilt-like patterned farmland. The area's main industry is farming of beef cattle, grain, sheep and pigs.[citation needed][4] 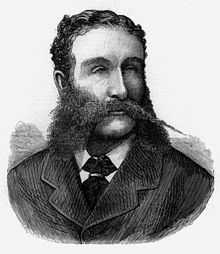 Jarowair (also known as Yarowair, Yarow-wair, Barrunggam, Yarrowair, Yarowwair and Yarrow-weir) is one of the languages of the Toowoomba region. The Jarowair language region includes the landscape within the local government boundaries of the Toowoomba Regional Council, particularly Toowoomba north to Crows Nest and west to Oakey. Giabal is the Southern neighbour in Toowoomba City.[5]

Originally the area around what is now known as Bell was known at Cattle Creek, Jimbour Station and was part of a large land holding called Jimbour Station. In the 1870s the area was opened up for closer settlement and Angus & Christina McPhee from Scotland became the first European settlers nearest to what would become the village of Bell. Over time other families - including Bellingham, Bradley, Edwards, Ensor, McClelland Rush and Walker - settled in the vicinity of Cattle Creek and in 1878 a school was established at Maida Hill to cater for these families. The first use of "Bell" as a town name was in mid-1905 however it was still inter-changeable with Cattle Creek as a description of the general area. In April 1906 the Bell Branch railway line was opened linking to the main line at Dalby and at that same time 1,600 acres (650 ha) was resumed for the township and surveyed in to town allotments. The first land sales in Bell were in May 1906. The village was named after Sir Joshua Peter Bell who, at that time, was owner of Jimbour Station.[2][3] The railway continued to operated until 1994.

The Bell Provisional school opened on 4 November 1907 and the Bradley, McPhee and Shaw families feature strongly on the enrolments of 1907. On 1 January 1909, it became Bell State School.[7]

Facilities available in Bell include a caravan park, a country hotel (pub), a swimming complex, tennis courts, a lawn bowls club, a 9-hole golf course and a horse racing track. The Bell Bunya Community Centre at 71 Maxwell Street houses the Bell Library, a branch of Western Downs Libraries.[9] Fuel is available from the Bell Store. The main social gathering point in town is at the 'Bellvue' pub while at the Memorial Hall country dances and/or balls are hosted a number of times during each year.[citation needed] The Bell State (government) School, which caters for children in classes from Prep to Year 10, celebrated its centenary in 2007.

The Railway Heritage Parkland, built on the site of the original railway terminus, features an early model diesel locomotive and a vintage passenger carriage as well as a historical mural painted on the shed wall. A number of Bell's early buildings were constructed from locally sourced sandstone - an example is a stone house which was built in 1913.[citation needed] The Roman Catholic Church hosts a mural painted by local artists showing a history of Salvation.[citation needed] The Bluebelles Art Gallery at the Bell Bunya Community Centre holds displays of local artists' works.

Bell is known for its traditional country arts and crafts as well as rural-based activities such as horse race meetings, the rural show, rodeo and campdraft competitions.[10] The local show, which celebrated its 50th consecutive year in 2008, is held annually on the first weekend in March. The show features wood chopping, displays of the area's livestock (including milking goats), and working cattle dog 'trials'.[11]