For other uses, see The Advocate (disambiguation).

The Advocate is a local newspaper of North-West and Western Tasmania, Australia.

Its readership covers the North West Coast and West Coast of Tasmania, including towns such as Devonport, Burnie, Ulverstone, Penguin, Wynyard, Latrobe and Smithton.

It is currently published by Australian Community Media, from the Harris Building, Burnie.

On Wednesday 1 October 1890 Robert Harris and his sons, Robert and Charles published the first issue of The Wellington Times, Burnie’s first newspaper.[1] It was named after the county in which Burnie and Emu Bay were located and was first published only on Wednesdays and Saturdays. With a circulation around 2000 its four broadsheet pages cost 1.5 d.

The original Burnie Wellington Times office in 1890 stood on a site in Cattley Street and employed a staff of 10. In 1892 The Wellington Times was made a tri-weekly, appearing on Tuesday, Thursday and Saturday and on 2 November 1897, the name was changed to The Emu Bay Times reflecting the area in which it was published.[2] The success of the newspaper encouraged the proprietors to extend operations to Devonport and on 4 January 1899 the tri-weekly The North Western Advocate and Agricultural and Mining Gazette was produced.[3]

The separate publication of the two newspapers lasted only 11 months by which time the Government Railway had reached Burnie and on 13 November 1899 the two publications amalgamated to become a daily newspaper, The North Western Advocate and The Emu Bay Times. In 1902, new premises had been erected in Mount Street, at the present (2010) site and the staff had increased to 26. In the last decade of the 19th century, the North-West and West Coast were served by a number of daily publications - but by 1920 The Advocate was the sole survivor.[4]

In the 1950s The Advocate was one of the first daily newspapers in Australia to use colour in advertisements and in 1968 it was the first daily newspaper in Australia to publish on a Web-Offset press which today is the industry standard. Over the three years from 1993 to 1996, The Advocate embarked on a technology development programme that resulted in computer based full-page negative output on 1 October 1996. 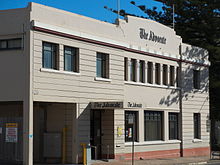 The Advocate building in Burnie.

In 2004, The Advocate became the third largest regional daily of Rural Press thereby ending the involvement of the Harris family for the first time since inception. In 2008, Rural Press became part of Fairfax Media, Australia’s largest integrated metropolitan, regional and rural print, online and digital media business in Australasia with The Advocate the only daily newspaper covering all areas of North West and Western Tasmania.

In 2009 all printing was centralised in Launceston, at a print facility run by The Examiner, a former rival publication that was owned by Fairfax Media, the then-owner of The Advocate. The press was dismantled and shipped off to a newspaper in New Zealand, where it was deployed at another newspaper owned by the Fairfax Media group.

The Advocate anniversary and celebratory editions regularly draw on the historical photographs of the newspaper.[5][6]

The newspaper is currently owned and published by Australian Community Media.

Luke Sayer was appointed editor in July 2017 following the departure of Courtney Greisbach, who became editor of The Examiner.[7] Mr Sayer has family roots in the North-West stretching back to the 1840s and had served as deputy editor since 2016. He worked for The Advocate in the 2000s before working for The Mercury, Federal MP Sid Sidebottom and the Cradle Coast Authority.