Redcliffe is the name of a residential suburb in the north of the Brisbane metropolitan area in Queensland, Australia. It also refers colloquially to the Redcliffe Peninsula as a whole, a peninsula jutting into Moreton Bay which contains several other suburbs. Redcliffe falls within the Moreton Bay Region local government area. Since the 1880s, Redcliffe has been a popular seaside resort within the Brisbane metropolitan area.

The town's name originates from "Red Cliff Point" named by the explorer Matthew Flinders, referring to the red cliffs at Woody Point.[3] Redcliffe became Queensland's first colony in 1824; however, it was soon abandoned for Brisbane.

Redcliffe holds the distinction of being the first European settlement in Queensland, first visited by Matthew Flinders on 17 July 1799.[4] Explorer John Oxley recommended "Red Cliff Point" – named after the red-coloured cliffs visible from Moreton Bay – to the Governor Thomas Brisbane for the new Moreton Bay penal colony, reporting that ships could land at any tide and easily get close to the shore.[5]

The penal colony was established at Redcliffe on 13 September 1824, under the command of Lieutenant Henry Miller with 14 soldiers, some with wives and children, and 29 convicts. However, this settlement was abandoned after one year and the colony was moved south to a site on the Brisbane River at North Quay, 28 km (17 mi) south, that offered a more reliable water supply. This settlement lead to the establishment of Brisbane, now Queensland's capital city.

Redcliffe became a pastoral district in the 1860s and in the 1880s boomed as a seaside resort town. In 1878, a suburban subdivision called Portwood Estate (around the present day Portwood Street, Sheehan Street, and Sylvin Street) was offered for sale, with the lots described as "large, elevated, picturesque, salubrious, with rare perspective" in Humpy Bong which was to be "the fashionable watering place of the future!". The estate map shows the Redcliffe railway line terminating at a railway station just to the north-east of the estate (in the area of present day Macnaughton Street).[6] However, the Redcliffe Peninsula railway line was not opened until October 2016 (138 years later) and the terminus was located in neighbouring Kippa-Ring.[6]

In October 1881, approximately 60 allotments of "Ramsgate Estate" were advertised to be auctioned for sale by Arthur Martin & Co, being subdivisions 1 to 60, of portion 205 in the Parish of Redcliffe.[7][8]

From 1911 the twin screw excursion steamer Koopa made regular trips to Redcliffe jetty. The principal route for passengers was a steamer from Sandgate pier to Woody Point Pier. The Hornibrook Bridge connecting Clontarf in the Town of Redcliffe to Brighton in City of Brisbane was completed in 1935 and allowed easy access to and from Brisbane by motor car leading the way to rapid suburban development.[9] That led to the cessation of the Sandgate to Woody Point steamers.

A famous Ningy Ningy Bora ring structure, consisting of two separate rings, large and small, joined by a ritual pathway, once existed between Kippa Ring and Anzac Avenue. Aboriginals as far away as Noosa would travel there to perform initiation ceremonies. It was razed by the Council around 1950.[10]

In 1958, the Gibb family from Manchester, England emigrated to this area and called it home for a period. Barry, Robin and Maurice Gibb went on to form the highly successful music group, The Bee Gees. In 1959, Brisbane based Speedcar driver Bill Goode, the promoter of the Redcliffe Speedway (located at the Redcliffe Showgrounds) hired the brothers to entertain the crowds at the speedway from the back of a truck during the interval. This was the first ever public performance by the trio.[11] In a letter to the Redcliffe Museum in 1999, Barry Gibb wrote "The smell of the oil, the noise and the atmosphere was incredible. This was the first public appearance Robin, Maurice and I ever made in Australia. We sang through the PA system and people threw money onto the track, and we met Brisbane's leading DJ and racing car driver Bill Gates, who suggested we call ourselves the BG's and even played our songs on his radio show, "Swinging' Gates' Platter Chatter". Hence Redcliffe became the birthplace of the Bee Gees." 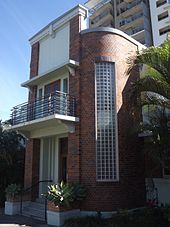 The first high-rise apartment building was constructed along Marine Parade in 1974.[12] For decades the interest for similar development was limited – until 2000 there were only four apartment buildings higher than 6 stories across the entire Peninsula. Renewed interest in Redcliffe as a seaside lifestyle precinct occurred in the 2000s and 2010s and as a result high rise and mix use development is found in all areas of Redcliffe along the coastline.

Redcliffe has a number of heritage-listed sites, including:

Attractions such as Suttons Beach(location of Luna Park Redcliffe (1944 to 1966)[19][20]), Redcliffe Jetty, Settlement Cove Lagoon, Redcliffe Museum, Redcliffe Botanic Gardens and Redcliffe Showgrounds are all within the suburb of Redcliffe. The entire Redcliffe Parade precinct is home to an abundance of restaurants and eateries including the award-winning[citation needed] Rustic Olive Italian restaurant and the Mon Komo hotel. On Sundays, the Redcliffe Markets take place along Redcliffe Parade and in recent years have been a significant event for local businesses with crowds of thousands taking part.[21]

Aside from smaller events, in September each year, Redcliffe celebrates its history as Queensland's first European settlement location with the Redcliffe festival event. This festival is chiefly held in the Redcliffe CBD with Redcliffe Parade being closed off to traffic for most of the day. Other attractions as part of this festival include the KiteFest, The Jetty Fiesta, KiteFest Live and Spring Break Beach Party with ongoing interest from local community groups and sponsors to create larger and more attractive events each year.

A statue and walkway in honour of the Bee Gees was unveiled by Barry Gibb on 14 February 2013. Barry returned to open the second stage of the walkway on 9 September 2015.[22]

A number of well-known sporting teams represent the local area. Some of them are the well known Sandgate-Redcliffe Gators, Redcliffe Dolphins, Redcliffe Tigers, Peninsula Power FC and Redcliffe Padres. Redcliffe hosts the only harness racing in Queensland that is North of Brisbane at the Redcliffe Harness Racing & Sporting Club.[25]