The Australian contribution to the war in Afghanistan has been known as Operation Slipper (2001–2014) and Operation Highroad (from 2015).

Australian Defence Force (ADF) operations and the size of the forces deployed have varied and ADF involvement has included two major areas of activity: Afghanistan and the Persian Gulf. These activities have seen the deployment of naval, air and land forces that have taken part in combat and combat support operations as part of the International Security Assistance Force (ISAF).

In mid-2014, the naval and logistic support operations in the Persian Gulf were re-designated as Operation Manitou and Operation Accordion respectively. 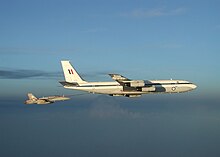 RAAF C-130 Hercules transport aircraft were also involved in providing logistic support for deployed forces. The Special Forces were involved with the establishment of the US-led coalition's first Forward Operating Base (Camp Rhino) southwest of Kandahar in November 2001, followed by the capture of Kandahar International Airport in December 2001. The initial ADF commitment in Afghanistan concluded in December 2002 when the Special Air Service Task Group was withdrawn.[3] Following this date until 2005 Australia's total contribution to efforts in Afghanistan were two officers attached to the United Nations and the Coalition land mine clearing force.[4]

All three squadrons of the Australian Special Air Service Regiment (SASR) were deployed to Afghanistan in 2001 and 2002. The dates of these deployments were:[5]

A 300-strong Special Operations Task Group was deployed to support the Reconstruction Taskforce in April 2007, including a Commando company-group, elements of the SASR, and an integral combat service support team.[7] In addition to radar crews, logistics and intelligence officers, and security personnel, this brought the number of Australian personnel in Afghanistan to 950 by mid-2007, with further small increases to 1,000 in mid-2008, 1,100 in early 2009[11] and 1,550 in mid-2009.[12] These increases occurred in spite of opinion polls indicating that public support for the deployment was decreasing, with a poll released in September 2008 finding that a majority of those surveyed were opposed to Australia's continued military involvement in the country.[13]

In early 2009, a number of Operational Mentoring and Liaison Teams (OMLTs) were embedded into the Afghan National Army battalions serving in the 4th (ANA) Brigade, 205th Hero Corps, in Uruzgan as part of the Australian mission to mentor and partner the ANA within the province. Consequently, the RTF was renamed the Mentoring and Reconstruction Task Force.[12] On 16 January 2009, Trooper Mark Donaldson, a member of the SASR, was awarded Australia's highest gallantry medal, the Victoria Cross for Australia. Donaldson was awarded the medal for exposing himself to enemy fire to protect injured Australian troops and then rescuing an Afghan interpreter under heavy enemy fire during a contact on 2 September 2008.[14]

A modest Australian force remained in Afghanistan over this period and was involved in counter-insurgency operations in Uruzgan province in conjunction with Dutch, US and other coalition forces. MRTF was again renamed to the Mentoring Task Force in early 2010. Based around a combined arms battalion-sized battle group, it consisted of motorised infantry and cavalry force elements supported by engineers, as well as coalition enablers including artillery and aviation assets. The Rotary Wing Group flying CH-47D Chinooks, the Force Logistics Asset and an RAAF air surveillance radar unit were also based in Kandahar.[15][16] A further 800 Australian logistic personnel were also based outside of Afghanistan, in locations in the Middle East.[12] Meanwhile, detachments of maritime patrol and transport aircraft continued to support operations in Iraq and Afghanistan, based out of Al Minhad Air Base in the United Arab Emirates.[17]

Over the course of the operation, as the size of Australia's contribution has fluctuated and the scope of operations undertaken has evolved, the number and type of units deployed has also changed. A snapshot of the order of battle from March 2011, when approximately 1,550 Australians were deployed to Afghanistan, is as follows:[18] 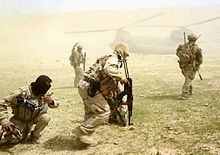 At the end of October 2013, Prime Minister Tony Abbott traveled to Afghanistan with Opposition Leader Bill Shorten for a special ceremony at the Australian base in Tarin Kowt in Uruzgan. He told a gathering of troops and Afghan leaders that "Australia's longest war is ending. Not with victory, not with defeat, but with, we hope, an Afghanistan that is better for our presence here." Afghan forces were scheduled to take over running of the camp in mid-December. The last combat troops were withdrawn on 15 December 2013; however, approximately 400 personnel remain in Afghanistan as trainers and advisers, and are stationed in Kandahar and Kabul.[19][20]

Operation Slipper concluded on 31 December 2014, with Australia's "train, advise and assist" mission in Afghanistan as part of the NATO-led Resolute Support Mission being conducted under the code-name Operation Highroad after this date. Approximately 400 Australian personnel are deployed as part of the new mission, including personnel in mentoring and advisory roles, as well as medical personnel, force protection and logistic support.[23] Over 26,000 Australian personnel have served in Afghanistan.[24]

In 2016 the launched an inquiry into allegations that Australian special forces personnel conducted war crimes in Afghanistan between 2005 and 2016. In February 2020 it was announced that 55 incidents were being investigated, and 336 people had provided evidence.[25]

Since October 2001 the Royal Australian Navy (RAN) has maintained a continuous presence in and around Iraqi territorial waters as part of Operation Slipper and subsequent operations. There were four major rotations of RAN ships to this area of operations between December 2001 and March 2003. The primary focus of these rotations was to conduct Maritime Interception Operations as part of a US, Australian and British force enforcing United Nations Security Council resolutions against Iraq. The first rotation consisted of Her Majesty's Australian Ships (HMAS) Sydney, Adelaide and Kanimbla. These ships were followed in February 2002 by HMA Ships Canberra, Newcastle and Manoora and again in July 2002 by HMAS Arunta and Melbourne.[26]

HMAS Kanimbla departed from Sydney, Australia on 20 January 2003 again bound for the Persian Gulf under the mission objectives of Operation Bastille. On arriving in Bahrain on 16 February she reverted to the original mission objects of Operation Slipper (that of enforcing UN sanctions against Iraq). On 20 March 2003, HMA Ships Kanimbla, Anzac and Darwin participated in the combat phase of the 2003 Iraq War, codenamed Operation Falconer; in April Kanimbla supported Operation Baghdad Assist, delivering medical supplies that were transported to Baghdad.[26] During these operations the Australian ships pioneered a number of techniques that increased the effectiveness of Maritime Interception Force operations leading to them intercepting and boarding about 1,700 vessels in this period. Four Australian naval officers commanded the multinational force at various times during the course of the operation.[citation needed] Detachments from the Army's 16th Air Defence Regiment provided point defence to the Kanimbla and Manoora during their deployments.[27]

From 2009 Australian warships and aircraft in the Middle East have also been involved in counter-piracy operations and maritime interdiction off the Horn of Africa as part of Combined Task Force 151.[28]

A detachment of four Australian F/A-18 Hornet fighter aircraft provided air defence for the US military base on the island of Diego Garcia, British Indian Ocean Territory during the campaign against the Taliban. The initial detachment was provided by No. 77 Squadron RAAF between December 2001 and 10 February 2002. This was replaced by a detachment from No. 3 Squadron RAAF which was deployed between 10 February 2002 and 20 May 2002. No further Australian units were deployed to Diego Garcia.[29] 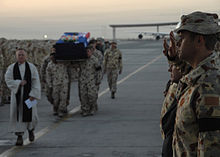 The repatriation ceremony held for Private Sher on 7 January 2009

Operation Slipper is notable for the first Australian combat deaths since the Vietnam War, and to date all casualties have occurred during operations in Afghanistan.[30] 41 Australian soldiers have been killed and 261 wounded, the majority since October 2007.[1][31][32] Another Australian was killed while serving with the British Army.[31][33]

From March 2011, the ADF in Afghanistan has exclusive rights to a leased Mi-26 Halo heavy lift helicopter provided by PME International-Vertical T, enabling deployed forces to be less reliant on road transport.[34] 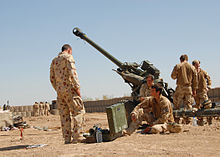 ^1 While Operation Slipper ceased on 31 December 2014, funds have been allocated to repair equipment returned to Australia and to contribute to the sustainment of the Afghan National Security Forces.