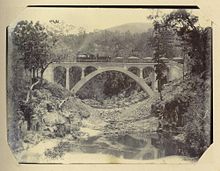 What appears to be a ballast train crossing over the completed Deep Creek railway bridge, Gayndah district, 1905. The bridge is on the section from Degilbo to Wetheron

RM 1901 crossing the 1905 cast concrete Deep Creek bridge near Gayndah, one of the first such structures in Queensland

The Mungar Junction to Monto railway line is a 267 kilometre railway in Queensland, Australia. Progressively opened in eleven stages between 1889 and 1928 the line branched from the North Coast line at Mungar Junction a short distance west of Maryborough and followed a westerly route towards Biggenden and Gayndah before turning north via Mundubbera and Eidsvold to Monto. It is also known as the Gayndah Monto Branch Railway.

The first section from Mungar Junction to Brooweena was opened on 29 July 1889 and sidings were established at Pilerwa, Yerra, Thinoomba, Hunter’s Hut and Aramara. Originally called Teebar and later known as Clifton and then Woocoo, Brooweena (perhaps an Aboriginal word for "crab" or "crayfish") acquired that name in 1890. Brooweena has always relied heavily on the local sawmill and the railway provided ready transport of timber.

Opened on 1 March 1891 the second stage brought the line a short distance to Boompa and, on 13 April 1891, via Lakeside to the larger settlement of Biggenden. The fourth stage saw the line opened a short distance west of Biggenden to Degilbo (then known as Woowoonga) on 1 April 1893. A very busy railhead thrived and goods were reconsigned by wagon to the likes of Gayndah, Mundubbera and Eidsvold.

The next two stages were opened to Wetheron on 21 December 1905 and to Gayndah on 16 December 1907. The line passed through small sidings at Muan, Chowey, Didcot, Gooroolba and Byrnestown en route to Wetheron and at Mount Lawless, Dappil and Ideraway en route to Gayndah. Gayndah apparently takes its name from the local Aboriginal word for "thunder" and is at the heart of a large citrus growing area. It is Queensland’s oldest provincial town and was once favoured to be the state capital.

The heritage-listed Deep Creek Railway Bridge is between the Muan and Chowey sidings, designed by William Pagan.

Some six years passed before the seventh stage to Boomerang was opened on 1 November 1913 passing through Banapan, Dirnbir, Mount Debatable and Humphery. The next stage saw the opening of the line to Philpott Creek and Mundubbera on 3 February 1914. Freight transport increased as two sawmills consigned timber east and frequent shipments of cattle and pigs occurred.

To Ceratodus, Mulgildie and Monto

The balance of the line to Monto was opened in three stages – to Ceratodus on 26 April 1924, to Mulgildie on 20 June 1927 and finally to Monto on 15 September 1928. Stops were established at Lacon, Riverleigh, O’Bil Bil, Malmoe, Grosvenor and Eidsvold en route to Ceratodus as part of stage nine. Ceratodus takes its name from the lungfish (neoceratodus forsteri) an air-breathing fish which inhabits the nearby Burnett River. The Archer brothers settled the Eidsvold region in 1848. Although of Scottish origin, they later moved to Norway. Eidsvold is named after a small Norwegian town where that country’s constitution was signed. Sidings were built at Jirette, Cynthia, Abercorn, Anyarro, Kapaldo and Selene when stage ten to Mulgildie (spelt "Mulgeldie" until 1945 ) was completed. The eleventh and final stage saw the line terminate via Three Moon at Monto.

The journey from Brisbane to Monto by mixed train took some fourteen hours, and three times a week a sleeping car connected with the mail train at Mungar, taking twenty-one hours.

In addition to the Mungar Junction to Monto line, the Queensland government decided to construct two other lines to Monto. The first is the branch line from Byellee (near Gladstone) that travels south-west to Monto, opened between 1910 and 1931. Completion of that line thus provided a semi-circular inland link between Maryborough and Gladstone. Because light track was laid between Mungar Junction and Mundubbera, the route was never an alternative when floods or derailments blocked the North Coast line.

The other planned line to Monto from Rockhampton was commenced but never completed. A line from Rannes and Thangool (the Callide Valley Branch Railway) terminated at Lawgi when construction ceased as a result of the Great Depression.

The line no longer has a passenger service, and goods traffic is mainly timber and agricultural produce. Coal has been discovered near Monto, but will likely be railed to Gladstone if a mine is developed. The Gladstone - Monto line has been out of service since 2002 but is being maintained to preserve it for mineral transportation in the future. The railway line from Maryborough to Monto was maintained and once a week a goods train went to Monto and back carrying timber and sometimes molasses but gradually loads were being refused and eventually the trains ceased and the railway line became completely unused after the last train, a celebratory journey on an old steam train, came through from Monto to Maryborough in 2005. After that only a very occasional Queensland Rail vehicle was ever seen on it.

Following the massive flooding events of 2010 and 2013 in the North Burnett District, the railway bridges and lines were somewhat damaged and in 2017 the Queensland Labour Govt gave contractors the job of removing the entire railway and infrastructure. All the railway lines and fittings were torn up and sold off.

As at December, the future care and maintenance, (weeds, fence-line maintenance, rubbish removal, landcare and erosion control) and the possible future use of this (once highly valuable and well used) railway "easement" remains unknown to the affected landowners and district residents although discussions are underway to progress the use of part of the railway "easement" from Gayndah to Mundubbera as a public recreational area or "rail trail".