Biggenden is a rural town and locality in the North Burnett Region, Queensland, Australia.[2][3] In the 2016 census, Biggenden had a population of 845 people.[1]

Biggenden is on the Isis Highway 287 kilometres (178 mi) north-west of the state capital Brisbane, and 85 kilometres (53 mi) west of Maryborough.

The name is derived from the Kabi word bigindhan meaning a place of stringybark.[4][5]

Biggenden was founded in 1889 as a service centre to the short-lived goldrush towns of Paradise and Shamrock; and for coach passengers travelling west from Maryborough. The township, including the intriguingly named Live And Let Live Inn, moved to a new location alongside the railway station when the rail line arrived in 1891. Biggenden Post Office opened on 16 May 1891.[6]

Biggenden Provisional school opened on 9 May 1892 becoming Biggenden State School in 1900. In January 1953, the school experimented with offering high school subjects by correspondence. In 1958, a secondary school section was added.[7][8]

In October 1928, the Biggenden branch of the Queensland Country Women's Association rooms were officially opened by J.C. Robertson, chairman of the Degilbo Shire Council.[9] 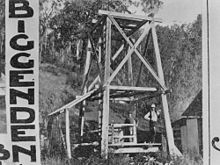 Primary production is the most significant industry in the Shire with beef and dairy cattle being predominant.[11] Other agricultural pursuits include grain crops, piggeries, peanuts, citrus and timber. The area is also rich in minerals. Biggenden Mine is located eight kilometres out of town off Ban Ban Springs Road. Gold, bismuth and more recently magnetite have been extracted from the mine. The township is also close to Coalstoun Lakes National Park and Mount Walsh National Park.

In November 2005, the Queensland Government opened the Paradise Dam, about 30 minutes north-west of Biggenden, on the Burnett River. The 300,000ML dam, which submerges the former gold mining town of the same name, is touted as securing the future of the nearby Bundaberg and Childers region, although no water will be available for residents of the Biggenden area. However, more than 400 jobs were created during its construction and the dam site is proving to be one of the shire's largest tourist attraction.[12] Artefacts and buildings removed from Paradise before the dam wall was built are now on display by the Biggenden Historical Society.

The Biggenden branch of the Queensland Country Women's Association meets at the CWA Hall at 32 Edward Street.[14]

Biggenden has a number of heritage-listed sites: