Previous Next
Not to be confused with Fern Gully.
See also: Upper Ferntree Gully
Suburb of Melbourne, Victoria, Australia

Ferntree Gully is a suburb of Melbourne, Victoria, Australia, at the foothills of the Dandenong Ranges, 30 km east of Melbourne's Central Business District, located within the City of Knox local government area. Ferntree Gully recorded a population of 26,428 at the 2016 Census.

The suburb is on the Belgrave railway line and it takes between 42 minutes (stopping all stations and then express service from Box Hill) to 60 minutes (all stations service) to Flinders Street, CBD.

Natural features include a large part of the Dandenong Ranges National Park which forms a picturesque backdrop to Ferntree Gully, especially the Ferntree Gully village part of the suburb. Important features of that national park include One Tree Hill (formerly a fire-lookout, but now covered with trees, the lookout has been removed), and the Kokoda Trail, a memorial walk dedicated to the Kokoda Trail of WW2 (includes interpretive signage)—this part of the National Park (which is well known as "1000 steps", where many tourists go) is located in the neighbouring suburb of Upper Ferntree Gully—and accessed via the Mt Dandenong Tourist Road. It is also a place for picnics and exercise, where many community groups meet. 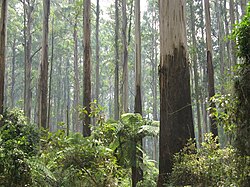 Ferntree Gully, was home to the Wurundjeri Aboriginal tribe prior to European settlement. The abundance of Tree Ferns stretched from the Township to the National Park and picturesque scenery and lush flora started attracting recreational visitors from the 1870s. In 1882 the gully was set aside for public use. Throughout the 1880s the township began to grow, shops were established, as well as hotels, churches, and a primary school. With the arrival of the railway line (extended from Ringwood) in 1889, the area became more accessible to visitors. Initially the line terminated at Upper Ferntree Gully, with a narrow-gauge line extending to Gembrook in 1900. Between 1958 and 1962 the narrow-gauge 2' 6" line was upgraded to broad-gauge 5' 3" and electrified to Belgrave which is where the narrow-gauge line (now better known as Puffing Billy) operates from today. Up until the mid-1970s the old Puffing Billy Railway shed was located below Quarry Road just west of Upper Ferntree Gully railway station. The Shire of Fern Tree Gully also was proclaimed in 1889. One of the Buildings from the old shire offices, on the corner of Selman Avenue and Burwood Highway, Ferntree Gully, has been preserved under a heritage listing and now houses a community health service (entry via Selman Avenue). It was also used as the local library for many years. On 4 July 1969 the Shire of Knox was proclaimed a "City" and new offices were built on Burwood Highway Wantirna South where the offices are today. The Ferntree Gully cemetery is the resting place of a number of historically significant local people as well as world-renowned artists, authors and poets.

Ambleside Homestead, in Olivebank Road, Ferntree Gully, was built in the 1890s and is now the base for the Knox Historical Society and a local history museum. It holds extensive collections of historic documents and photographs dating back to the 1800s and is also the custodian of all old school photographs from the City and Shires of Knox schools maintaining an accurate collection up to today. Old school photos from FTG and Boronia High, Knox Tech and primary schools are on display and available for copy for a fee. Period furnishings and artefacts and vintage farm equipment reflect the pioneer life and development of the area.

W. Kennedy-Ross, a Scot, secured the title to the triangular section bounded by Ferntree Gully Road, Scoresby Road and Burwood Highway, in 1872. About 1886, Ross erected the Hunting Tower Hotel, which was replaced a few years later by the Club Hotel. The owner of this hotel, one W. Town, gave the name Kent Park to the area west of Dobson Street.

In the early 1900s, the 180 acres (0.73 km2) of Kent Park were used for general grazing, farming, growing oats and keeping a variety of livestock.

A John Aitken bought Kent Park in 1913, selling most of the original purchase to a Mr Powell in 1921. The latter then sold to a Brigadier Knox, who in turn sold all except 10 acres (40,000 m2) to Alex Creswick. In 1968/69, Hooker-Rex Estates purchased from the Creswick family, some 110 acres (0.45 km2) for the current housing estate. The Education Department bought the land on which Kent Park primary school now stands; the school opened in February 1975.

There is the Ferntree Gully library and community centre, where the Knox Festival is held in March every year (the alternative venue being in Rowville). Each December, the Knox Christmas Carols are held on the grounds of the Ferntree Gully football/Cricket club in Brenock Park Drive (now known as Wally Tew Reserve).

Notable community and retail sites in Ferntree Gully include the Coolstore on Dorset Road (which was owned and run by local orchardist Ken Dobson and his family for over 40 years until 2007), Woolworths Supermarket, Brennock Park Drive is one of the busiest in Australia, the Knox Environment Society (based at the rear of Ferntree Gully Secondary College, which closed at the end of 2006) and the Knox Historical Society (based at Ambleside Historical homestead). There are two pubs in Ferntree Gully, both on Burwood Highway—The Ferntree Gully Hotel (or "The Middle") and the Club Hotel (the former Vass's Pub).

Retirement villages include Amaroo on Burwood Highway and Glengollan on Underwood Road.[3]

There are a number of kindergartens in Ferntree Gully including Bena Angliss Pre-school.

Ferntree Gully has a railway station located on Station Street, near the shopping district, which was previously known as Lower Ferntree Gully, followed by Fern Tree Gully, having been changed to the latter on 29 February 1972.[6] A number of Melbourne bus routes also service the suburb which is run by Ventura bus lines and use the Ferntree Gully Railway station located on Station Street as a Terminus. The Railway station is a Premium fully staffed Metro station with PSOs after 6pm. There are 1000 car parking spaces. 108 trains pass through Ferntree Gully per day between Belgrave and the CBD with many running express from Box Hill to the city and express to Box hill on the way to Belgrave.

Noel John McNamara (born 12 January 1938) is an Australian campaigner for victims of crime and outspoken critic of the Australian justice system. In 1993 Noel established the Crime Victims Support Association (CVSA) with his wife Bev McNamara. The association is politically involved and lobbies the government on criminal law reform and greater support for victims of crime.

Actress Pippa Black, who portrayed Elle Robinson in the TV series Neighbours, was born in Ferntree Gully on 16 October 1982.

Mountain Gate Shopping Centre lies on the corner of Ferntree Gully Road and Burwood Highway. Its retail outlets include Woolworths, Coles, bookstore, news agency, butchers, bakeries and a variety of other stores. There is also an Officeworks, Aldi and a Pet Barn. The Ferntree Gully Village at the intersection of Station Street, Alpine Street and Forest Road is the official site of Ferntree Gully Township, Railway Station and historic town centre. It contains an IGA and one other supermarket, green grocer's, butchers and curiosity shops as well as a selection of unique restaurants and cafes. It also has one of the busiest railway stations in the City of Knox.