Elsternwick is an inner suburb of Melbourne, Victoria, Australia, 9 km south-east of Melbourne's central business district. Its local government area is the City of Glen Eira. At the 2016 Census Elsternwick had a population of 10,349.

In terms of its cadastral division, Elsternwick is in the parish of Prahran within the County of Bourke.

Although no longer officially in "Elsternwick", the cricket ground, originally the home of the Elsternwick Cricket Club, and currently known as the Sportscover Arena, is located within the larger area known as Elsternwick Park — located at the junction of the Nepean Highway and Glen Huntly Road — as is the former Elsternwick Park Golf Course.

The creek nearby became known as the Elster Creek; and, when a village grew up on the creek, the Anglo-Saxon suffix ‘wick’, meaning village, was added.[3]

The Elsternwick village was proposed in 1851 [4]. Elsternwick was originally situated across three municipalities - Caulfield, Brighton and St Kilda. At the end of the 1880s unsuccessful attempts were made for Elsternwick to become administratively independent. Today it is in the Local Government Area of the City of Glen Eira. The postcode is 3185.

In 1861 a railway line, operated by the Melbourne and Hobson's Bay United Railway Company, was built from Melbourne to Brighton, via Elsternwick. The Elsternwick train station is on the Sandringham metropolitan train line Glen Huntly Road. The first site of Caulfield Grammar School, founded in 1881, was adjacent to the Elsternwick railway station.

In the 1880s, the Elsternwick railway station was also the Melbourne end of the railway line to the large-scale sugar beet processing mill at Rosstown (see Rosstown Railway) — now known as Carnegie — and beyond. This railway was seldom used, and it ceased to function in 1916.

The former ABC studios in Melbourne were located in Gordon Street, Elsternwick near Ripponlea. The studios were built during the 1950s and 1960s and were decommissioned in 2017. Many programs were filmed and produced in the studios, such as Countdown, Recovery and Adam Hills in Gordon Street Tonight.[7]

Glen Huntly Road in Elsternwick has a variety of cafés and restaurants, and Elsternwick is the home of perhaps the best-known brothel in Australia, and certainly Melbourne; Daily Planet, which was the first in the world to be listed on a stock exchange (the Australian Securities Exchange).[8]

Hattam (Mens and Boys Wear) Stores, at 383 Glenhuntly Road, a long, narrow shop, is one of the last locations in Australia that still has a Lamson "Rapid Wire" Cash Carrier in place; it connects three locations in the lower section of the shop with the central cashier's desk.[9]

The 2017 season of The Block was located in Elsternwick in Regent St. 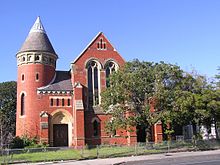 Melbourne Tram Route No. 67 links Elsternwick to the Melbourne CBD. It travels along Glen Huntly Road from Carnegie, through Glen Huntly and South Caulfield to Elsternwick and, then, via Brighton Road and St Kilda Road to the CBD, via Swanston Street. It terminates at the tram stop outside the University of Melbourne University, in Carlton.

The Elsternwick Cricket Club was founded in August 1901. The Elsternwick Main Oval, now known as Sportscover Arena or Elsternwick Park, was established shortly after the club's foundation. The 'Wickas', as the club is affectionately known, plays in the Victorian Sub-District Cricket Association.[10]

Golfers played at Elsternwick Park Golf Club, also known as Royal Elsternwick, on Glen Huntly Road until 2018, when the course closed to be used as passive open space.[11]

The Elsternwick Croquet Club, founded in 1911, is situated in the Hopetoun Gardens.

Built as a public hall in 1889 and converted into a cinema in 1911, Classic Cinemas is Melbourne's oldest continuously running cinema

Elsternwick contains a number of heritage-listed sites, including: