Location of Wodonga in Victoria (red)

Wodonga /wəˈdɒŋɡə/[2] is a city on the Victorian side of the border with New South Wales, 300 kilometres (190 mi) north-east of Melbourne, Australia. It is located wholly within the boundaries of the City of Wodonga LGA. Its population is approximately 35,100[1] and is separated from its twin city in New South Wales, Albury, by the Murray River. Together, the two cities form an urban area with an estimated population of 93,603.[3]

Founded as a customs post with its twin city Albury on the other side of the Murray River, the town grew subsequent to the opening of the first bridge across the Murray in 1860. Originally named Wodonga, its name was changed to Belvoir then later back to Wodonga.

The Post Office opened 1 June 1856 although known as Belvoir until 26 July 1869.[4] It had previously been regarded as the smaller, less prosperous cousin of the two. Whilst still somewhat smaller than Albury, economic growth in both areas has ameliorated such distinctions.

Under the Köppen climate classification, Wodonga has a humid subtropical climate (Cfa). The city gets around 125.1 clear days annually. 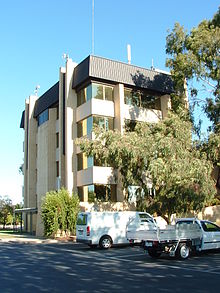 Much of the arts and theatrical activity in the region is conducted in a cross-border fashion; for instance HotHouse Theatre is located almost equidistant from the Wodonga and Albury city centres.[6]

Wodonga is served by the Apex Club of Wodonga, the Wodonga Lions Club and two Rotary clubs – Belvoir Wodonga and Wodonga. Community Service is important to the Wodonga Community and activities such as the cities Australia Day Celebrations, Christmas Carols and the display of Santa's throughout the City over the festive season would not be possible without community service clubs. Recently Apexian Dean Freeman was awarded National Apexian of the Year for community service efforts throughout the area and overseas.

The World's Biggest Rolling Pin (listed in the Guinness Book of World Records) is located in Wodonga, atop "Henri's Bakery".[8]

Wodonga is also home to a number of cricket clubs which compete in the Cricket Albury Wodonga (CAW) competition. These include the Belvoir Eagles, Wodonga Bulldogs and Wodonga Raiders.

Golfers play the course at SS&A Wodonga on Parkers Road.[10]

Wodonga has two rugby league clubs called the Wodonga Storm and Wodonga Wombats that play in the Murray Cup.

Australian Socceroos Archie Thompson and Joshua Kennedy played for soccer team Twin City Wanderers as children. Wodonga Diamonds Football Club and Wodonga Heart Football Club are two other soccer clubs based in Wodonga. All three clubs compete in the Albury Wodonga Football Association. In early 2014, a new club representing the region and playing its games in Wodonga was founded as Murray United F.C.. It is currently competing in the National Premier Leagues Victoria 3 for season 2020.[11]

Wodonga has a horse racing club, the Wodonga & District Turf Club, which schedules around seven race meetings a year including the Wodonga Cup meeting in November.[12]

Wodonga has a radio-controlled car site with both on-road and off-road tracks on the Lincoln Causeway.

Major secondary industries based in Wodonga include a logistics distributions hub (LOGIC), a large cattle market, a pet food factory (Mars Petcare), a can factory (Visy), a cardboard box factory (Visy Board), a hydraulic hose manufacturer (Parker Hannifin), an abattoir, a foundry (Bradken Limited), a polypropylene film manufacturer (Taghleef Industries (formerly Shorko) a concrete pipe & pole manufacturer (Rocla) and a transformer manufacturer (Wilson Transformer Company) as well as a variety of other smaller enterprises. It also serves as a central point for the delivery of government services to the surrounding region.

It houses the Australian corporate headquarters for Mars Corp. Wodonga is the site of an Australian Army logistics base and a training centre for Army technical apprentices, the Army Logistic Training Centre, which is based at Latchford Barracks and Gaza Ridge Barracks.[13] It is also the home of a campus of La Trobe University and Wodonga Institute of TAFE.

Several experiments in cross-border governance in an attempt to bring the cities of Albury and Wodonga together have been tried. (See Albury–Wodonga for details.)

v2food is set to open a manufacturing plant, the will use locally-grown ingredients, in Wodonga in the second quarter of 2020.[14]

A daily tabloid owned by Fairfax Media, the Border Mail, is printed in Wodonga. The Border Mail has offices in both Albury and Wodonga.

There are three commercial radio stations broadcasting into Wodonga that are based over the border in Albury, namely 1494 2AY, Triple M The Border 105.7, and Hit104.9. Notably, Hit FM south eastern network is programmed out of the Albury/Wodonga Hub, going to centres around New South Wales, Victoria, Tasmania and into South Australia. Broadcast out of the same building as Triple M The Border, which is also networked to local stations around New South Wales, Victoria, Tasmania and South Australia.

Albury/Wodonga is one radio market, thus advertisements are directed to both sides of the border. The Albury/Wodonga market underwent significant change in 2005 when Macquarie Southern Cross Media bought 105.7 The River from RG Capital Radio Network, and 2AY and Star FM from the DMG Radio Australia. Due to cross-media ownership laws preventing the ownership of more than two stations in one market, Macquarie was required to sell one of these stations and in September 2005 sold 2AY to the Ace Radio network. 2AY takes its night time programming from the Macquarie Radio Network. Commercial radio stations from Wangaratta (3NE, Edge FM) can also be received in most parts of Wodonga.

The ABC produces breakfast and morning radio programs through its local radio network, from the studios of ABC Goulburn Murray located in Wodonga on 106.5FM. The rest of their content is delivered from Melbourne. The ABC also deliver ABC Radio National, ABC Classic FM, and Triple J on 103.3 FM.

There is also a community radio station known as 2REM 107.3 FM. The Albury-Wodonga Community Radio station plays a large number of speciality programs including those for the retiree, ethnic and aboriginal communities throughout the day and a range of musical styles including underground and independent artists from 8:00pm onwards.

In addition, the area is serviced by a Radio for the Print Handicapped station, 2APH, on 101.7 FM. Other stations include the Albury-Wodonga Christian Broadcasters' 98.5 The Light,[15] and the dance formatted narrowcaster RawFM on 87.6 FM. 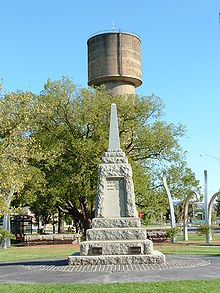 Wodonga railway station lies on the Melbourne–Albury and Melbourne–Sydney lines. The Sydney to Melbourne railway line, which ran through the centre of Wodonga has been relocated to the north of the town. A new railway station was also recently constructed. The new line was officially opened in late 2010, for which the town held a celebratory day for the last commercial passenger train to pass through the town centre.[16]

Wodonga is on the junction of the Hume Highway (the main route from Melbourne to Sydney) and the Murray Valley Highway (which follows the southern bank of the Murray River).

Local public transport is provided by Dysons (which took over Mylon Motorways) who run buses on a number of routes both within Wodonga and to Albury.[17] Bus services are generally quite infrequent and public transport use in Wodonga is very low.[citation needed] There are also long-distance bus services to the capitals.

There is a comprehensive network of bicycle paths in Wodonga, including one across the Lincoln Causeway to Albury.

Albury Airport, which provides scheduled commuter flights to Melbourne and Sydney, is a short drive from Wodonga.

Wodonga is also home to the Flying Fruit Fly Circus School, the educational arm of The Flying Fruit Fly Circus, that provides educational services with an emphasis on the performing arts and contemporary circus training. In 2003 a devastating fire destroyed the school's facilities at, then Wodonga High School,[20] and the school relocated to Wodonga West Secondary College (now Wodonga Middle Years College Felltimber Campus).[21]