Sunbury (/ˈsʌnbəri/)[2] is a Satellite city located 39 kilometres (24 mi) north-west of Melbourne's central business district, in the state of Victoria, Australia. Its local government area is the City of Hume. At the 2016 census, Sunbury had a population of 36,084.[1] Statistically, Sunbury is considered part of Greater Melbourne. The Victorian government's 2009 decision to extend the Urban Growth Boundary saw Sunbury absorbed by Melbourne's suburban expansion in 2011.[3]

The Sunbury area has several important Aboriginal archaeological sites, including five earth rings, which were identified in the 1970s and 1980s, and believed to have been used for ceremonial gatherings. Records of corroborees and other large gatherings during early settlement attest to the importance of the area for Aboriginal people of the Wurundjeri tribe.[4][5][6]

Sunbury was first settled in 1836, by George Evans and William Jackson. It was Jackson and his brother, Samuel, who named the township Sunbury, after Sunbury-on-Thames, in Middlesex, England when it was established in 1857. The Post Office opened on 13 January 1858.[7]

Sunbury's connection with the history and development of Victoria is influential because of its most famous and powerful citizen, "Big" Clarke. In 1837, Clarke came to the area, and gained vast pastoral licences encompassing Sunbury, Clarkefield and Monegeetta.[8] His role as one of the biggest pastoralists in the colony, and his power and position within the Victorian Legislative Council, were highly significant in the early years of Victoria.

During the early decades of self-government in the Colony of Victoria, post 1851, there was a continual struggle in parliament, between the Legislative Assembly and the Legislative Council for ascendancy and the control of government. It was Council members, such as Clarke, who attempted to negate what they saw as the excesses of manhood suffrage, republicanism and Chartism, as embodied in the Assembly, in order to protect their own position.[9]

"Big" Clarke, as a member of the so-called bunyip aristocracy, also helped to frustrate legislative measures involving opening land to small farm selectors. Melbourne Punch depicted Clarke in anti-squatter cartoons, such as "The Man in Possession"[10] In 1859, "Big" Clarke was involved in a scandal around the discovery of gold on his holdings in Deep Creek. Shares in the Bolinda company soared and Clarke sold his shares at the peak of the rush, before the fraud was exposed. The gold assay was actually 'salted', possibly via a shotgun blast of golden pellets into the samples. Clarke claimed the rich assay was proved when washed in a soup bowl. The ever-barbed Melbourne Punch explained how the fraud worked in a cartoon of a chipped Chinese Willow Pattern plate titled "The Soup Plate".[11]

In 1874, Clarke's son, the future Sir William Clarke, 1st Baronet, built a mansion on an estate named "Rupertswood", after his own son, Rupert. The estate had access to a private railway station, which was mainly used to bring visitors to the property. Though the station was constructed in the late 19th century, the Clarkes did not pay the railways for its construction until the 1960s. (Rupertswood railway station was closed as a result of the Regional Fast Rail project and is now only a disused platform).[12] The Clarkes also had a connection to the Kelly Gang story via their police connection with Superintendent Hare.

The younger William was the president of the Melbourne Cricket Club, and it was through that position that the touring English cricket team came to spend the Christmas of 1882 at Rupertswood. On Christmas Eve, the English team played a social game of cricket against a local team. Lady Clarke took one or more bails, burnt them, and put the ashes in a small urn, wrapped in a red velvet bag, which she presented to the English Captain, Ivo Bligh.[13] She proposed that the ashes be used as a perpetual trophy for matches between the two countries. The Ashes has since become one of the world's most sought-after sporting trophies.

In 1922, the Clarke family sold the property to H V McKay, the owner of the Sunshine Harvester Works, who died in 1926. His estate sold the property in 1927 to the Salesian Catholic order. Until recently the mansion and surrounding property were used for educational and agricultural purposes, and as a boarding school for students undertaking both academic and agricultural endeavours. The school, known as Salesian College, Rupertswood, is still located on the property. The mansion has been restored, and is used for weddings and other formal functions.

In the early 1970s, the area, which was then still largely rural, became famous in Australia as the site of the Sunbury Pop Festival, which was held annually from 1972 to 1975. 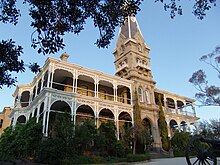 The demographics/culture of Sunbury up until the mid-1980s was predominantly White and some other minor ethnic groups. It has only been in the last 20 years that Sunbury has seen an increase of other nationalities (predominately from an immigration from New Zealand and the United Kingdom).

Sunbury's residents represent diverse cultural backgrounds, partly due to the working-class background, and proximity to major manufacturing and transport hubs, with Melbourne Airport only being 17.5 kilometres (11 mi) from the township. A recent trend for people who work in the Melbourne CBD to trade longer commute times for a more economic lifestyle (due to cheaper housing), has seen the population of Sunbury grow in number, with numerous new housing estates ringing the borders of the established township. Sunbury's population was recorded as being 25,086 in the 2001 census, and is estimated at approximately 34,000 in 2006, making it the 38th largest urban centre by population in Australia. Sunbury has a high Caucasian population.

Sunbury has a town centre containing Jaycar Electronics, Calco Electrical, Coles, Woolworths, Foodworks and IGA supermarkets as well as Big W, Harris Scarfe and Target, Good Guys, Godfrey's department stores. Away from the town centre is an Aldi Supermarket, and Bunnings Warehouse hardware store. There are also many food outlets located in Sunbury such as Nando's, Vics Cuisine, Rocquette, Restaurant 77 and a variety of pizza restaurants, fish and chip shops and Asian restaurants. Sunbury also has many great little cafes to dine at such as The Spotted Owl, Sacco Coffee, cafe Circe and Mac's Lounge. Sunbury has a Reading Cinema, three Hotels and The Alley Sunbury nightclub, a 330-person capacity nightclub located 150 metres from the railway station and taxi hubs. 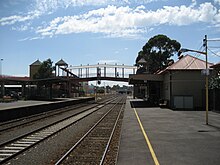 Sunbury Railway Station is connected by Metro services to Melbourne and by V/Line services on the Bendigo train line to both Melbourne and country Victoria. V/Line services are not as frequent as those on the metropolitan Metro service — an approximate hourly frequency is provided by V/Line on weekdays, although on weekends service levels can be as infrequent as once every 80 minutes.

The State Government electrified the tracks between Sunbury and Sydenham in a $270 million investment, bringing more frequent passenger services to the town - these Metro services started running on 18 November 2012.[14] 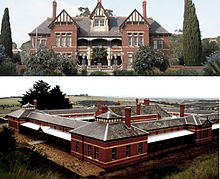 Sunbury is represented in the following sporting leagues: 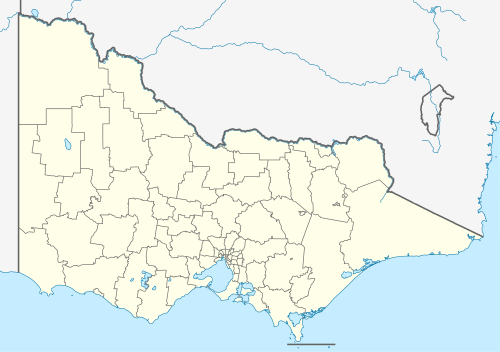