Prime7 is an Australian television network owned by Prime Media Group Limited, and an affiliate of the Seven Network. Prime Television launched on 17 March 1962 as CBN-8 in Orange, and has since expanded to cover regional New South Wales, Victoria and the Australian Capital Territory.

Prime7 along with GWN7 national broadcast facilities are based in Canberra, with playout facilities located at MediaHub (within the Sydney suburb of Ingleburn) Australia. Prime Media Group head office/administration is located in Pyrmont, Sydney.[3]

Prime Television originally began as a group of separate stations and networks – Midstate Television in Orange, Dubbo and Griffith; RVN/AMV in Wagga and Albury; and 9-8 Television in Tamworth and Taree.[4]

CBN-8 Orange first aired on 17 March 1962, followed by CWN-6 Dubbo on 1 December 1965.[4] The two stations were both licensed to Country Television Services (also the owner of radio station 2GZ in Orange). CWN was a full-time relay of CBN—the first Australian television station to relay another. The two stations thus formed the country's first regional television network.[4]

Albury launched on 7 September 1964 while RVN-2 Wagga Wagga began broadcasting on 19 June 1964, and MTN-9 Griffith began on 15 December 1965. The two stations merged in 1971 as the Riverina and North East Victoria Television Service Pty Ltd with the callsign RVN/AMV on air.[4]

As a result of the financial difficulties that many independent stations faced, MTN-9 joined CWN-6 and CBN-8 to form Television 6-8-9 in 1973.[4] Relays were launched in Portland, Lithgow, Mudgee, Cobar, Kandos and Rylstone and Bathurst. In 1981, 6-8-9 changed its name to Midstate Television.[4]

Colour television was introduced at the same time as the rest of the country, on 1 March 1975 – one of the single most expensive processes undertaken by CBN to date.[4] The station was a prominent broadcaster of local sporting events including tennis and rugby.[4] In 1979, a documentary titled Goin' Down The Road, about the 1978 National Rodeo Titles won the network a Logie award for an 'Outstanding Contribution by a Regional Station'.[4]

Midstate produced a number of local programs, including the Weekend Report, Early Shift, Rural Roundup and Around the Schools.[4] From 1968, CBN was able to access a Postmaster General's Department microwave link for national news bulletins and major events.[4]

Griffith remained a one-station market, however instead of taking programming from Prime in line with the network's other stations, MTN-9 relayed programming mainly from WIN Television in southern New South Wales.[4] A supplementary licence, AMN-31, was successfully bid for by MTN in 1996, providing a relay of Prime Television.[5] Soon after the station was purchased by WIN Television, which undertook a number of minor changes – mainly changing the news service to WIN News, and using entirely WIN branding. AMN-31 remains a relay of Prime. Similarly, the Mildura licence area remained separate from the remainder of Victoria, albeit with a single station, STV-8, later bought out by WIN Television in 1996.[6] In 1997 Prime was successful in bidding for a new licence for the area at a cost of $3.2 million.[7] PTV-31 began broadcasting the following year.[5]

Although advertising revenue increased post-aggregation, local programming declined as a result of the costs incurred by the network's expansion – an estimated $45 million had been spent by Ramcorp during and in the lead-up to aggregation.[5] After losses of $50 million, it was not until 1993 that the renamed Prime Television Limited posted a profit.[5][8]

The network began to expand into New Zealand in 1997, when a number of licences were purchased from United Christian Broadcasters for an estimated $3.6 million.[10] Prime Television New Zealand began broadcasting on 30 August 1998, with a nightly local news program in both Waikato and Christchurch.[10] Prime also expanded into Argentina with the purchase of the Canal 9 network.[11] 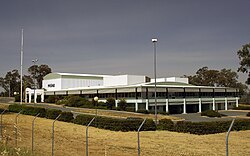 The renamed Argentine network Azul Televisión was sold for $108 million in early 2000 due to lower-than-expected performance.[12] During the same year, Prime benefited greatly from its affiliation with the Seven Network throughout its carriage of the 2000 Summer Olympics in Sydney. The network's relationship with Seven was further developed throughout the early 2000s, leading to the introduction of 7onPrime promotional branding for Seven Network-produced programs.[13]

Local news bulletins for Newcastle, the Gold Coast, Canberra, and Wollongong were axed in 2001 due to falling ratings and the anticipated costs of the switch to digital television.[14] This, and the closure of a number of news bulletins by Southern Cross Broadcasting, prompted the Australian Broadcasting Authority to investigate the adequacy of regional news services[15] The ABA later mandated that stations broadcast a minimum level of local content, based on a points system – two points per minute for local news, and one point per minute for other local content, excluding paid advertisements.[16]

Mildura Digital Television, a digital-only station in Mildura began transmissions in 2006 as a joint venture between Prime Television Limited and WIN Corporation. Section 38B of the Broadcasting Services Act allowed for the provision of a third station owned by either one or both existing networks. MDT is a direct relay of Ten Melbourne, albeit with local advertising.

On 25 September 2010, Prime began transmission of the new HD digital channel 7mate aimed at men 16–49. The first program to be broadcast was the drawn 2010 AFL Grand Final. On 15 January 2011, Prime Media Group reported that Prime and GWN were set to rebrand as Prime7 and GWN7 respectively. Their news bulletins had quickly changed their names to Prime7 News and GWN7 News, while 7TWO dropped the "Prime" logo on the multichannels. Prime and GWN relaunched on 16 January 2011 at 18:00 (6pm).[19]

In December 2016, Prime7 transferred its playout facilities to MediaHub Australia located within the Sydney suburb of Ingleburn. The facility is a joint venture between public broadcaster Australian Broadcasting Corporation and rival regional network WIN Television. Network officials noted that its existing Canberra facilities cannot be upgraded with technological advancements, causing Prime7 to be incapable of relaunching its HD simulcast as well as introducing 7flix to its viewers.[20]

On 3 August 2017, 18 months after launching in metropolitan areas, Prime7 announced that it would carry 7flix to its regional stations in northern and southern New South Wales, regional Victoria and Mildura.[21] The channel became available on digital channel 66 in MPEG-4 format.[22] On 15 January 2018, Prime7 quietly relaunched its primary HD service, Prime7 HD, on digital channel 60 in MPEG-4 format.

Prime's programming schedule is almost identical to those of Seven Network metropolitan counterparts ATN in Sydney and HSV in Melbourne, with some differences. Since the Prime network's inception it has featured a broad range of original local programming, currently including children's program Possum's Club with Madelaine Collignon and station mascot Prime Possum as well as community service segment Prime7 InfoNet, a series of short updates listing local community events.

Prime7's overnight schedule also differs from the Seven Network feed, containing infomercials from Danoz Direct, Home Shopping, and a feed from pay television channel Expo.[23] Past programming from Prime Television has been recognised nationally, with some local productions winning the Logie Award for 'Outstanding Contribution by a Regional Television Station'. The network has won Logies for Goin' Down The Road (CBN-8, 1979),[24] Naturally (NEN-9/ECN-8, 1984),[25] Stranded (Prime Television, 1993),[26] Rest in Peace (Prime Television, 1994),[27] and No Time For Frailty (Prime Television, 1996).[27]

Prime7 News is the network's local news service. Full bulletins are produced for the towns and surrounding regions originally covered by the stations "Midstate 6,8,9 Television", Dubbo/Orange, "RVN-2/AMV-4", Wagga Wagga/Albury and "9/8 Television" (NEN-9/ECN-8) Tamworth/Taree, prior to the aggregation of regional television services in New South Wales that occurred in the early 1990s.[4] In other areas two-minute news updates are shown at various times of the day.[13]

Prime7 is available in standard definition digital format. Since June 2007 a 1080i high definition simulcast has also been available, replacing the network's former 576p service.[30] Prime7 is viewed mainly through free-to-air terrestrial transmitters, although subscription cable also provided by TransACT and Neighbourhood Cable in the Australian Capital Territory and Ballarat, respectively.[31][32]

Prime Television became a network in May 1988, with shared logos produced and used across the regional stations, featuring the word Prime Television either above an outlined triangle or rectangle.[4] Aggregation occurred across the network on 31 March 1989, along with the introduction of a green logo featuring the word Prime with the letter i dotted with a stylised globe, introduced in December 1988.[4] This logo was used on its own across the network until 1996, when a new circular logo was introduced in 1990.[5] Following a decade in use, 2001 saw the launch of a new simplified yellow logo, with the removal of the circle. This logo was launched concurrently with a similarly design logo on the Golden West Network.[13] Following the 2011 relaunch, a new red logo was introduced which incorporates the Seven Network logo.