Not to be confused with Dusty Fletcher.
Australian rules footballer, born 1975

Dustin Fletcher (born 7 May 1975) is a former professional Australian rules footballer who played for the Essendon Football Club in the Australian Football League (AFL). He is widely acknowledged as one of the finest defenders in VFL/AFL history.[1]

Fletcher was recruited by the Essendon Football Club in the 1992 National Draft. He played his first senior game against Carlton in his senior year of high school at Penleigh and Essendon Grammar School.

He was a key member of the 1993 premiership team in his first AFL season, a team which is often referred to as the "Baby Bombers".

Fletcher also played in the 2000 premiership team, a year in which he also won the Crichton Medal as Essendon's best and fairest and was selected in the All-Australian team. 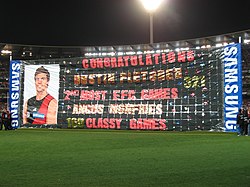 A banner congratulating Fletcher in 2010.

Noted for his longevity in the game, Fletcher played a total of 400 senior VFL/AFL games, which stands as the fourth-most by any player as of the end of the 2016 season. Fletcher played his 400th game in Round 9, 2015, becoming the third player in VFL/AFL history to reach the milestone, after Michael Tuck and Kevin Bartlett; it would end up being his final game, as he was unable to recover from a groin injury sustained during the match.[2] He holds the outright Essendon games record, having overtaken the previous record of 378 games held by Simon Madden in Round 1, 2014.[3] He is the second oldest player to play a VFL/AFL game, aged 40 years and 23 days at the time of his final game, behind only Vic Cumberland (who played the 1920 season aged 43).[4] With his father, Ken, the Fletchers hold the record for the most VFL/AFL career games played by a father and son, with 664 games between them.

On 12 January 2016, during the summer after his retirement, Fletcher was named as one of 34 past and present Essendon players found guilty over their use of illegal supplements during the 2012 AFL season. As a result, Fletcher was suspended from playing at all levels for 24 months, which with backdating and provisional suspension served resulted in suspension until November 2016.[5]

After serving his suspension, Fletcher will return in 2017 to play suburban football for Essendon Doutta Stars.[6]

Fletcher's execution of the torpedo punt was often used as a set-play clearing strategy by coach Kevin Sheedy. In a game in 2007, he kicked a torpedo punt goal from more than 70 metres.[7] According to The Sunday Age, it was the fifth-longest kick in the history of the VFL/AFL.