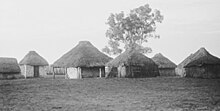 Aboriginal Australians are the various Indigenous peoples of the Australian mainland and many of its islands, such as Tasmania, Fraser Island, Hinchinbrook Island, the Tiwi Islands and Groote Eylandt, but excluding the Torres Strait Islands.

Aboriginal Australians comprise many distinct peoples who have developed across Australia for over 50,000 years. These peoples have a broadly shared, though complex, genetic history, but it is only in the last two hundred years that they have been defined and started to self-identify as a single group. The definition of the term "Aboriginal" has changed over time and place, with the importance of family lineage, self-identification and community acceptance all being of varying importance.

In the past, Aboriginal Australians lived over large sections of the continental shelf and were isolated on many of the smaller offshore islands and Tasmania when the land was inundated at the start of the Holocene inter-glacial period, about 11,700 years ago. Studies regarding the genetic makeup of Aboriginal groups are still ongoing, but evidence has suggested that they have genetic inheritance from ancient Asian but not more modern peoples, share some similarities with Papuans, but have been isolated from Southeast Asia for a very long time. Before extensive European settlement, there were over 250 Aboriginal languages.

In the 2016 Australian Census, Indigenous Australians comprised 3.3% of Australia's population, with 91% of these identifying as Aboriginal only, 5% Torres Strait Islander, and 4% both. They also live throughout the world as part of the Australian diaspora.

Most Aboriginal people speak English, with Aboriginal phrases and words being added to create Australian Aboriginal English (which also has a tangible influence of Aboriginal languages in the phonology and grammatical structure).

Aboriginal Australians, along with Torres Strait Islander people, have a number of health and economic deprivations in comparison with the wider Australian community.

The ancestors of present-day Aboriginal Australians migrated from Asia by sea during the Pleistocene era and lived over large sections of the Australian continental shelf when the sea levels were lower and Australia, Tasmania and New Guinea were part of the same landmass. As sea levels rose, the people on the Australian mainland and nearby islands became increasingly isolated, and some were isolated on Tasmania and some of the smaller offshore islands when the land was inundated at the start of the Holocene, the inter-glacial period which started about 11,700 years ago and persists today.[3]

Studies regarding the genetic makeup of Aboriginal groups are still ongoing, but evidence has suggested that they have genetic inheritance from ancient Asian but not more modern peoples, share some similarities with Papuans, but have been isolated from Southeast Asia for a very long time. Before extensive European settlement, there were over 250 Aboriginal languages.[4][5]

In a 2011 genetic study by Ramussen et al., researchers took a DNA sample from an early 20th century lock of an Aboriginal person's hair. They found that the ancestors of the Aboriginal Australian population split off from other Eurasians between 62,000 and 75,000 BP, whereas the European and Asian populations split only 25,000 to 38,000 years BP, indicating an extended period of Aboriginal genetic isolation. These Aboriginal ancestors migrated into South Asia and then into Australia, where they stayed, with the result that, outside of Africa, the Aboriginal peoples have occupied the same territory continuously longer than any other human populations. These findings suggest that modern Aboriginal peoples are the direct descendants of migrants who left Africa up to 75,000 years ago.[6][7] This finding is compatible with earlier archaeological finds of human remains near Lake Mungo that date to approximately 40,000 years ago.

The same genetic study of 2011 found evidence that Aboriginal peoples carry some of the genes associated with the Denisovan (a species of human related to but distinct from Neanderthals) peoples of Asia; the study suggests that there is an increase in allele sharing between the Denisovans and the Aboriginal Australians genome compared to other Eurasians and Africans. Examining DNA from a finger bone excavated in Siberia, researchers concluded that the Denisovans migrated from Siberia to tropical parts of Asia and that they interbred with modern humans in South-East Asia 44,000 years BP, before Australia separated from New Guinea approximately 11,700 years BP. They contributed DNA to Aboriginal Australians along with present-day New Guineans and an indigenous tribe in the Philippines known as Mamanwa. This study makes Aboriginal Australians one of the oldest living populations in the world and possibly the oldest outside of Africa, confirming they may also have the oldest continuous culture on the planet.[8] The idea of the "oldest continuous culture" is based on the geographical isolation of the Aboriginal peoples, with little or no interaction with outside cultures before some contact with Makassan fisherman and Dutch explorers up to 500 years BP.[9]

A 2016 study by the University of Cambridge reported that Papuan and Aboriginal peoples developed distinct markers around 58,000 years BP that distinguished them from the original out-of-Africa migration around 72,000 years BP, pointing to a single migration henceforth untouched by other groups. The study suggests that it was about 50,000 years ago that these peoples reached Sahul (the supercontinent consisting of present-day Australia and its islands and New Guinea). The sea levels rose and isolated Australia (and Tasmania) about 10,000 years ago, but Aboriginal Australians and Papuans diverged from each other genetically earlier, about 37,000 years BP, possibly because the remaining land bridge was impassable, and it was this isolation which makes it the world's oldest civilisation. The study also found evidence of an unknown hominin group, distantly related to Denisovans, with whom the Aboriginal and Papuan ancestors must have interbred, leaving a trace of about 4% in most Aboriginal Australians' genome. There is, however, huge genetic diversity among Aboriginal Australians based on geographical distribution.[10]

The Papuans have more shared alleles than Aboriginal peoples.[clarification needed] The data suggest that modern and archaic humans interbred in Asia before the migration to Australia.[11]

One 2017 paper in Nature evaluated artifacts in Kakadu and concluded "Human occupation began around 65,000 years ago".[12] 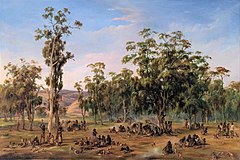 An Aboriginal encampment near the Adelaide foothills, 1854

In a 2001 study, blood samples were collected from some Warlpiri members of the Northern Territory to study the genetic makeup of the Warlpiri Tribe of Aboriginal Australians, who are not representative of all Aboriginal Tribes in Australia. The study concluded that the Warlpiri are descended from ancient Asians whose DNA is still somewhat present in Southeastern Asian groups, although greatly diminished. The Warlpiri DNA also lacks certain information found in modern Asian genomes, and carries information not found in other genomes, reinforcing the idea of ancient Aboriginal isolation.[15]

Aboriginal Australians are genetically most similar to the indigenous populations of Papua New Guinea, and more distantly related to groups from East Indonesia. They are quite distinct from the indigenous populations of Borneo and Malaysia, sharing relatively little genomic information as compared to the groups from Papua New Guinea and Indonesia. This indicates that Australia was isolated for a long time from the rest of Southeast Asia, and remained untouched by migrations and population expansions into that area.[15]

Aboriginal Australians possess inherited abilities to stand a wide range of environmental temperatures in various ways. A 1958 study comparing cold adaptation in the desert-dwelling Pitjantjatjara people compared with a group of white people showed that the cooling adaptation of the Aboriginal group differed from that of the white people, and that they were able to sleep more soundly through a cold desert night.[16] A 2014 Cambridge University study found that a beneficial mutation in two genes which regulate thyroxine, a hormone involved in regulating body metabolism, helps to regulate body temperature in response to fever. The effect of this is that the desert people are able to have a higher body temperature without accelerating the activity of the whole of the body, which can be especially detrimental in childhood diseases. This helps protect people to survive the side-effects of infection.[17][18]

Aboriginal Australians have lived for tens of thousands of years on the continent of Australia, through its various changes in landmass. The area within Australia's borders today includes the islands of Tasmania, Fraser Island, Hinchinbrook Island,[19] the Tiwi Islands and Groote Eylandt. Indigenous people of the Torres Strait Islands, however, are not Aboriginal.[20][21][22][23]

In the 2016 Australian Census, Indigenous Australians comprised 3.3% of Australia's population, with 91% of these identifying as Aboriginal only, 5% Torres Strait Islander, and 4% both.[24]

Aboriginal Australians also live throughout the world as part of the Australian diaspora.[citation needed]

Dispersing across the Australian continent over time, the ancient people expanded and differentiated into distinct groups, each with its own language and culture.[25] More than 400 distinct Australian Aboriginal peoples have been identified, distinguished by names designating their ancestral languages, dialects, or distinctive speech patterns.[26] According to noted anthropologist, archaeologist and sociologist Harry Lourandos, historically, these groups lived in three main cultural areas, the Northern, Southern, and Central cultural areas. The Northern and Southern areas, having richer natural marine and woodland resources, were more densely populated than the Central area.[25] 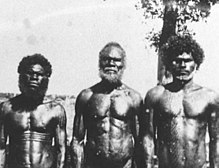 There are various other names from Australian Aboriginal languages commonly used to identify groups based on geography, known as demonyms, including:

A few examples of sub-groups

Other group names are based on the language group or specific dialect spoken. These also coincide with geographical regions of varying sizes. A few examples are:

However these lists are neither exhaustive nor definitive, and there are overlaps. Different approaches have been taken by non-Aboriginal scholars in trying to understand and define Aboriginal culture and societies, some focussing on the micro level (tribe, clan, etc.) and others on shared languages and cultural practices spread over large regions defined by ecological factors. Anthropologists have encountered many difficulties in trying to define what constitutes an Aboriginal people/community/group/tribe, let alone naming them. Knowledge of pre-colonial Aboriginal cultures and societal groupings is still largely dependent on the observers' interpretations, which were filtered through colonial ways of viewing societies.[29]

The term Aboriginal Australians includes many distinct peoples who have developed across Australia for over 50,000 years.[12][30] These peoples have a broadly shared, though complex, genetic history,[31][14] but it is only in the last two hundred years that they have been defined and started to self-identify as a single group.[32][33]

The definition of the term "Aboriginal" has changed over time and place, with the importance of family lineage, self-identification and community acceptance all being of varying importance.[34][35][36]

Main articles: Indigenous health in Australia and Closing the Gap

Aboriginal Australians, along with Torres Strait Islander people, have a number of health and economic deprivations in comparison with the wider Australian community.[39][40]

Indigenous "communities" in remote Australia are typically small, isolated towns with basic facilities, on traditionally owned land. These communities have between 20 and 300 inhabitants and are often closed to outsiders for cultural reasons. The long-term viability and resilience of Aboriginal communities in desert areas has been discussed by scholars and policy-makers. A 2007 report by the CSIRO stressed the importance of taking a demand-driven approach to services in desert settlements, and concluded that "if top-down solutions continue to be imposed without appreciating the fundamental drivers of settlement in desert regions, then those solutions will continue to be partial, and ineffective in the long term".[41]