Echuca (/əˈtʃuːkə/ ə-CHOO-kə)[2] is a town on the banks of the Murray River and Campaspe River in Victoria, Australia. The border town of Moama is adjacent on the northern side of the Murray River in New South Wales. Echuca is the administrative centre and largest settlement in the Shire of Campaspe. As at June 2018 Echuca had a population of 14,934,[1] and the population of the combined Echuca and Moama townships was 21,242[3] at the same time.

Echuca lies within traditional Yorta Yorta country. The town's name is a Yorta Yorta word meaning "meeting of the waters".[4] Echuca is close to the junction of the Goulburn, Campaspe, and Murray Rivers. Its position at the closest point of the Murray to Melbourne contributed to its development as a thriving river port city during the 19th century.

Present-day Echuca was founded by one of the most enterprising figures of the early colonial period, an ex-convict named Henry Hopwood. In 1850 he purchased a small punt to ferry people and goods across the Murray River near the Campaspe junction. The small settlement known as Hopwood's Ferry grew to become the town of Echuca. The Hopwood's Punt Post Office opened around 1854 and was renamed Echuca Post Office on 1 January 1855.[8]

By the 1870s Echuca had risen to prominence as Australia's largest inland port. Being the point of shortest distance between the Murray River and the major city of Melbourne, Echuca was both a key river port and railway junction. Steam-driven paddleboats would arrive at the 332-metre long redgum Echuca Wharf, which were unloaded by hydraulic crane, and the goods then transported by rail to Melbourne. Wool, wheat, other grains, livestock, and timber were the most common commodities transported to Echuca. The wharf has been listed as a Heritage Place on the Australian National Heritage List.

This industrial boom led to a rapidly expanding population, at one stage in excess of 6000, with more than a hundred pubs/hotels rumoured to exist in the Echuca district at one time. An iron bridge was constructed over the Murray River in 1878 by the NSW Railways Department.[9]

The expansion of the railways from Melbourne to most parts of Victoria, as well as improvements to roads and fickle river conditions all combined to lessen Echuca's importance, and by the 1890s the paddlesteamer fleet was in decline. An economic depression and the collapse of several banks virtually ended Echuca's role as a major economic centre, and its population began to disperse. 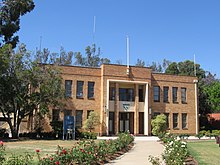 Echuca is the administrative centre for the Campaspe Shire Council.[12]

At the state level, Echuca is represented by the Electoral district of Murray Plains.

At the federal level, Echuca is represented by the Division of Nicholls.

The main industry in Echuca is tourism. Tourism earns about $250 million a year for the Echuca economy. Visitors are attracted to the town by its warm climate, the Murray River, recreational attractions, and historical features, some of which have come to public awareness by the Nancy Cato novel All the Rivers Run which was made into a TV miniseries. These include the Port of Echuca which has the world's largest fleet of operating paddle steamers.[citation needed]

Agriculture is very important to the region and dairy, wheat, sheep, pig, and cattle farms are all within close proximity. 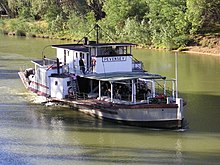 The port is home to the largest paddle steamer fleet in the world, which includes the world's oldest operating wooden hulled paddle steamer, the PS Adelaide built in 1866. There are several historic vessels operating out of Echuca on a daily commercial basis such as PS Pevensey (built 1911), PS Alexander Arbuthnot (built 1923), PS Adelaide (built 1866) operating from Echuca Wharf itself and the PS Emmylou (built 1980 with a steam engine in use from 1906), PS Canberra (built 1913) and PV Pride of the Murray (built 1924 as a logging barge C24) operating from Riverboat Dock, a short distance downstream from the main wharf. These vessels conduct between 4-6 1 hour cruises daily, while the PS Emmylou offers lunch, dinner, and scenic cruises. There are also a number of privately owned paddle steamers in Echuca, including the PS Hero, PS Henry Charles, and the former Church of England mission steamer, PS Etona.[13] As well as the paddle steamers there are numerous houseboats, many of which can be hired. The MV Mary Ann (built 1981) operates as a cruising restaurant all year round.

The Port of Echuca is also restoring the PS Success to full working order. When operational, it will be added to the fleet of paddle steamers at Echuca Wharf.[14]

In 1984, the Australian television mini-series, All the Rivers Run, based on a novel by Nancy Cato and starring Sigrid Thornton and John Waters, was filmed in and around Echuca. The local paddle steamers PS Pevensey and PS Emmylou featured in the mini-series as the PS Philadelphia and PS Providence, respectively. The airing of this series around Australia and internationally revitalised Echuca's tourism economy.

In 1985, parts of the Australian telemovie My Brother Tom (based on the book by James Aldridge) were filmed in Echuca.

In the TV series Glitch, Vic, the district supervisor for the police forces of Echuca, the fictional Yoorana, and surrounding communities, is based in Echuca.

The ABC aired an episode of Get Krack!n on 6 February 2019 satirising morning television segments about regional food and wine tourism. There was some concern locally about how the episode depicted the town and its effect on tourism, although the intent of the segment was to "[poke] fun at commercial morning breakfast shows and their often-condescending portrayal of rural and regional areas".[20]

A major dining attraction in Echuca was the well known wharf-side restaurant Oscar W's.[26] It held a reputation for fine dining and was awarded a Chef's Hat in the 2013 Australian Good Food and Travel Guide[27] and had previously been awarded a hat by The Age Good Food Guide.[28] It closed in 2014.[29] A protracted dispute over the redevelopment of the site, including expensive repairs to a damaged retaining wall[30] and the lease of the historical wharf site being put out for tender[31] both played a part in the controversial closure.

Echuca is connected over the Murray River to Moama by the Echuca-Moama Road Rail Bridge, completed in 1878. This historically significant bridge has riveted iron spans supported on cast iron pillars.[32] Trains no longer run on this bridge; a dedicated rail bridge has been constructed next to the old bridge, which now only carries road vehicles.

A second Murray River crossing is currently being constructed. The project is due to be completed in 2024.[33]

Community radio station EMFM broadcasts in Echuca on the frequency of 104.7FM, at a power of 1 kW. 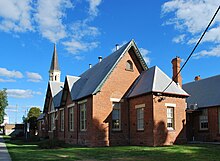 Bendigo TAFE has a campus in Echuca, offering education up to Diploma level in various fields.[38]

The town is also home to the Echuca Rockets, an inclusive all ability football team competing in the Victorian FIDA Football League - Northern Conference.[40]

Echuca has numerous other teams competing in regional and state sporting leagues, including netball, soccer, and field hockey. Echuca formerly fielded a Baseball team, the Rich River Mariners, who played in the Goulburn Valley Baseball League.[41] The team disbanded in 2006.

Echuca has a horse racing club, the Echuca Racing Club, which schedules around twelve race meetings a year including the Echuca Cup meeting in March.[42]

Echuca Harness Racing Club conducts regular meetings at its racetrack in the town.[43]

Golfers play at the Echuca Back Nine Golf Course on Eyre and McKenzie Streets.[44]

In 2006 the Inaugural Barry Beehag race was established in honour of Barry Beehag, a founding and life member of the Moama Water Sports Club.[45]

Echuca's sister city was Whitehorse, Yukon, Canada.[52] However, Whitehorse terminated the special relationship in 2008 due to the relationship being "strictly ceremonial in nature".[53]

2.08 km
No Reviews
Favourite
Link to Town: Echuca
The Port of Echuca is a living monument to the 1870’s when it was Australia’s largest inland port and indeed the third largest port in Australia outside Sydney and Melbourne. Authentic steam driven paddlesteamers depart daily from the Echuca Wharf which originally extended 333 metres in length in Read more…

Shebani’s Tastes of the Mediterranean

1.72 km
No Reviews
Favourite
Link to Town: Echuca
Port 53 is a modern fusion restaurant set in an industrial chic shed in Echuca’s historic port area. Re-launched in 2015 with a fresh Aussie fusion menu, Port 53 offers an ideal casual dining location to enjoy the best local and regional produce. The menu is kept intimate whilst changing monthly to ensure the seasonal produce is at its finest. Read more…

0.28 km
No Reviews
Favourite
May 24, 2019
-
June 1, 2019
This musical adventure follows the macabre Addams family as they are put to the test when daughter, Wednesday, now an eighteen year old, falls in love and invites her “normal” boyfriend and his parents to dinner. This hurls Gomez, Morticia, Pugsley, Uncle Fester, Grandmama and Lurch headlong into a night that will change the family forever. CALL The Echuca Paramount Read more…
Previous
Next
Get Directions
Australia for Adventurers and Dreamers Map