Deniliquin, (/dəˈnɪlɪkwɪn/)[2] known locally as "Deni", is a town in the Riverina region of New South Wales, Australia, close to the border with Victoria. It is the largest town in the Edward River Council local government area.

Deniliquin is located at the intersection of the Riverina and Cobb Highway approximately 725 kilometres (450 mi) south west of the state capital, Sydney and 285 kilometres (177 mi) due north of Melbourne. The town is divided in two parts by the Edward River, an anabranch of the Murray River, with the main business district located on the south bank.

The town services a productive agricultural district with prominent rice, wool and timber industries. At the 2016 census, the urban population of Deniliquin was 6,833.[3]

Prior to European settlement, the Aboriginal inhabitants of the Deniliquin area were the Barapa Baraba people.[4]

In 1843, the entrepreneur and speculator Benjamin Boyd acquired land in the vicinity of present-day Deniliquin (probably via his agent Augustus Morris). The location was known as The Sandhills, but Boyd (or Morris) named it Deniliquin after 'Denilakoon', a local Aborigine famed for his wrestling prowess.[5] An inn and a punt were established on the site between 1845 and 1847; the town site was surveyed in 1848, and gazetted in 1850.[4] The original Native Police force of Frederick Walker was organised at Deniliquin in 1848. Deniliquin Post Office opened on 1 January 1850.[6]

In 1853, William John Wills of the Burke and Wills expedition worked as a shepherd at the Royal Bank sheep station near Deniliquin.

As Deniliquin was established on the convergence of major stock routes between the colonies of Queensland, New South Wales and the Victorian gold rush centres of Victoria, it soon became an important river crossing and the first bridge was built over the Edward River in 1861. The Deniliquin and Moama Railway Company built a private railway in 1879 to connect with Moama, across the Murray River from the busy river port of Echuca, connected by rail to Melbourne.[4]

Wool growing quickly became a major industry and the area around Deniliquin was home to several Merino studs.[4] In 1861, George Hall Peppin and his two sons, experienced English sheep breeders, established a Merino stud at Wanganella station, north of Deniliquin. There, the brothers developed the Peppin Merino, able to thrive in drier inland regions. Today, as many as 70 per cent of Merinos in Australia are said to be directly descended from these sheep.[7]

In the 1860s, Deniliquin was the centre of a short-lived campaign by wealthy pastoralists including Peppin, George Desailly, Robert Landale and William Brodribb for secession from New South Wales and the creation of a new Riverina colony. This campaign was supported by David Jones, proprietor of the local newspaper, the Pastoral Times.[8][9]

Large-scale irrigation schemes came to the Deniliquin area with the establishment of the Deniboota and Denimein Irrigation Districts in 1938 and the Berriquin Irrigation District in 1939, using water diverted from the Murray River at Lake Mulwala through the Mulwala Canal. An ample and reliable water supply led to the development of water-intensive industries such as rice growing.[11]

During the Second World War, RAAF Station Deniliquin was home to No. 7 Service Flying Training School RAAF. It was also a final disbanding site for squadrons returning from active duty against the Japanese in the Pacific. No. 22 Squadron RAAF[12] and No. 30 Squadron RAAF[13] were disbanded here in 1946, and in 1945 and 1946 it was also a base for No. 78 Squadron RAAF before it was finally disbanded in Williamtown.[14]

In April 2006, the Herald Sun reported on its front cover that the Edward River was dry, with an accompanying photograph showing a dry creek.[16] This was later revealed to be erroneous; the photograph was of an unknown channel on a farm within 60 kilometres (37 mi) of Deniliquin, while the Edward River was in fact still running. Deniliquin Council and members of the Deniliquin community have since attempted to rectify the damage to local tourism by improving the profile of Deniliquin in various media outlets.[17]

Deniliquin has a number of heritage-listed sites, including:

According to the 2016 census of Population, there were 7,862 people in Deniliquin, including the surrounding rural area.

The Federal Hotel in Deniliquin

Deniliquin is a service centre for the surrounding agricultural region. The region includes both dryland and irrigated areas. The dryland areas support grazing, in particular beef cattle and wool growing. Deniliquin is home to many famous Merino studs and the saltbush plains produce quality medium class wool.

The irrigated areas produce a range of high-yield crops. Rice was a major crop until the recent drought. The largest rice mill in the southern hemisphere is in Deniliquin, producing large packs and bulk rice for export markets.[24] The rice mill closed in December 2007 and will reopen in April 2011.[25][26]

Deniliquin is also the headquarters of Murray Irrigation Limited, an irrigator owned private company and one of the largest privately owned irrigation supply companies in the world. Murray Irrigation manages the operations of the Berriquin, Deniboota, Denimein and Wakool Irrigation Areas in the Murray Valley. These areas produce 50% of Australia’s rice crop, 20% of NSW milk production, 75% of NSW processing tomatoes and 40% of NSW potatoes.[27]

Sawmills in the area process timber harvested from the River red gum forests lining the Edward and Murray floodplains.[28]

As the largest town in the south western Riverina, there is a range of government and commercial services to residents of the town and the surrounding area.

Climate data is sourced from Deniliquin Visitor Information Centre, of which was established in 1858 and is still active today; thereby, yielding one of the longest climate reference periods of any station in Australia.

Notable people from, or who have lived in, the Deniliquin area include:

It has a TAFE NSW Campus, which is part of the Riverina Institute of TAFE.[41]

Sporting clubs in the area include:

The Deniliquin Football Association ran from 1900 to 1932.

Formed in the 1960s. Currently playing in the Griffith and District Football Association

Deni Play on the Plains Festival

Deniliquin has had many local bands, some notable ones being the Lincolns, the Stormtroopers and the Lexies. Attempts been made to encourage other bands to come to Deniliquin to perform, with varying success. Solo performers who came from Deniliquin include Shane McGrath, Michael Gorham and Joel Sulman, with local artists often showcased at the Deniliquin Ute Muster.[43]

Deniliquin has been home to many music festivals. These include: 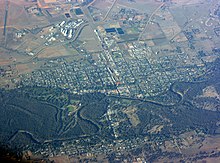 Aerial picture of the town

The local newspaper is the Deniliquin Pastoral Times. It is published on Tuesdays and Fridays and – on each of these days – has a circulation of 2787, with an estimated readership of 10,260.[49] Other newspapers circulated throughout the Deniliquin region include the Herald Sun, The Age, The Sydney Morning Herald and The Daily Telegraph.

The thriller The Clinic was filmed in Deniliquin in 2008. The producers used many locations in the town while shooting, including the Peppin Motor Inn, Warbreccan Homestead, Deniliquin abattoirs and the largest rice mill in the Southern Hemisphere.