Cottesloe was home to Australian Prime Minister John Curtin. The house he built still stands in Jarrad Street. It is now vested jointly in the National Trust of Australia (WA) and Curtin University.

Cottesloe is a beach-side suburb of the city of Perth in Western Australia. It is located roughly halfway between Perth's central business district and the port of Fremantle. It is famous for its beaches, cafes and relaxed lifestyle.

Cottesloe is bounded by the Indian Ocean to the west; a line extending from Boundary Road, Mosman Park to the ocean to the south; the Perth-Fremantle Railway, Stirling Highway, Congdon Street and West Coast Highway to the east; and North Street to the north. Cottesloe is generally residential, with a significant shopping area located between Jarrad and Station streets adjacent to the Cottesloe railway station.[3]

Of the occupied private dwellings in Cottesloe, 66.9% were separate houses, 14.9% were semi-detached, row or terrace houses, townhouses etc., and 18.1% were flat or apartments.[1]

Of the employed people in Cottesloe, 7.2% worked in hospitals (except psychiatric hospitals). Other major industries of employment included legal services 3.6% and general practice medical services 3.0%.[1]

Historically Cottesloe Beach and its panorama are reflections of the changes in the last 110 years of Perth's history. The photos and paintings of Cottesloe Beach that are either in collections or published, give tangible evidence of the importance of beach-oriented activities in the Perth community. Cottesloe Beach is a popular place for beach cricket. An oceanway allows pedestrians and cyclists to move along the beaches.

A plan to build a skatepark in Cottesloe in 2020, had resulted in heated debate between locals and skateboarders.[6]

Cottesloe is served by Swanbourne, Grant Street, Cottesloe, Mosman Park and Victoria Street railway stations on the Fremantle line. Various bus routes along Stirling Highway and through the suburb's western and eastern sections link Cottesloe to Perth and Fremantle. All services are operated by the Public Transport Authority. Cottesloe is serviced by the 102 operated by Swan Transit. 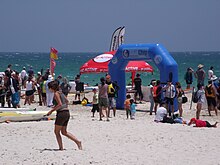 Kayaking competition at Cottesloe beach on a Western Australian Sunday

From 1901 to 1968 and from 1974 to 1980 Cottesloe was part of the Fremantle electorate, since 1934 a notional Labor seat. Its most prominent member was wartime Prime Minister John Curtin, a Cottesloe resident.[7]

Since 1980 it has been part of the federal division of Curtin. Curtin is regarded as a safe seat for the centre right Liberal Party, which has held the seat continually since its inception, with the exception of a period from 1996 to 1998 when former Liberal member Allan Rocher held the seat as an independent. The current member is Celia Hammond. In the parliament of Western Australia, its Legislative Assembly electoral district is Cottesloe, held by David Honey, also of the Liberal Party.[8]

John Curtin, Prime Minister of Australia for much of World War II, was local federal member of parliament from 1928 to 1931 and 1934 to 1945. He lived in Cottesloe from 1918 until his death in office in 1945.[9] Curtin's house in Jarrad Street is vested in the National Trust of Australia (WA) and Curtin University. During 2008 there was a suggestion that the house be relocated to the Curtin University grounds but the decision was made that the house remain in Cottesloe.[10] In May 2009 the federal government announced that it would provide a grant of $580,000 to the National Trust to restore the house.[11]

Claude de Bernales was a mining entrepreneur who in 1911 bought Attorney-General Richard Pennefather's 1898 Federation Queen Anne house, naming it Overton Lodge. In 1936 it was rebuilt as a 30-room Inter-war Spanish Mission style residence, designed by Bernard Evans.[12] It was bought for £30,000 by the Town of Cottesloe in 1950 and renamed the Cottesloe War Memorial Town Hall and Civic Centre.[13][14]