Chatswood is a major business and residential district in the Lower North Shore of Sydney, in the state of New South Wales, Australia, 10 kilometres north of the Sydney central business district. It is the administrative centre of the local government area of the City of Willoughby.

The Cammeraygal people inhabited the area for at least 35,000 to 50,000 years prior to European arrival.[citation needed]

Chatswood was named after Charlotte Harnett, wife of then Mayor of Willoughby and a pioneer of the district, Richard Harnett, and the original "wooded" nature of the area.[when?] The moniker derives from her nickname "Chattie"[2] and was shortened from Chattie's Wood to Chatswood.[when?]

Residential settlement of Chatswood began in 1876 and grew with the installation of the North Shore railway line in 1890 and also increased with the opening of the Harbour Bridge in 1932.[3]

By 1900, Chatswood was easily accessible by public transport. In 1903 the Council Chambers moved from Mowbray Road to Victoria Ave.

At this time Chatswood's history contained orchards and dairy farms on the west side of the train station as well as factories, such as Dairy Farmers Inc and Three Threes Pickle Factory on what was then Gordon Road (now the Pacific Hwy).

Chatswood has a number of heritage-listed sites, including:

Chatswood is one of the North Shore's major commercial and retail districts. The "Sydney global economic corridor", is used to describe a geographical "arch" of Sydney, home to international corporations. Many retail outlets are situated along Victoria Avenue and many office buildings are situated along Pacific Highway.

The Australian headquarters of Smith's Snackfood, Abigroup, Carnival Australia, , PepsiCo and Carter Holt Harvey[8] as well as offices of Nortel Networks, Optus, Lenovo, NEC, Leighton Contractors and Huawei are located in Chatswood. A number of high-density residential towers are also located in Chatswood. 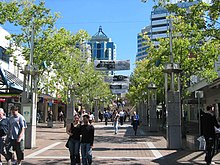 The Chatswood Mall Markets are held each Thursday and Friday in Chatswood Mall, Victoria Avenue and feature food and craft stalls, and live music.

Chatswood has a wide variety of restaurants and cafes and is known as a major dining destination in the Lower North Shore of Sydney. There are a large number of Chinese (including Cantonese), Japanese and Korean restaurants and eateries.[9]

There are many hotels in Chatswood. This includes The Mantra, near Chatswood railway station, The Sebel, near Westfield Shopping Centre, and as the Meriton Serviced Apartments Chatswood, built in 2015. The Chatswood Club, located on Help Street adjacent to Pacific Highway, is a venue hall which caters to weddings, birthdays, cocktail parties, and other age-appropriate festivities.

The first stage of the Sydney Metro runs from Tallawong railway station in North West Sydney to Chatswood Station. An extension of the line to the Sydney CBD is currently (2019) under construction.

An interstate bus service between Sydney and Brisbane via the North Coast stops at Chatswood.

The Willoughby Spring Festival is held in Chatswood in September annually. It is the second-largest in Lower Northern Sydney and is intended as testimony to a modern, multicultural and prosperous Chatswood. It showcases music, theatre, live performances, outdoor events, kids' events and visual arts. Willoughby Theatre Company (formerly Willoughby Musical Society) is based in Chatswood. It specialises in musical theatre. Chatswood Musical Society also performs musical theatre, but their events are staged in Pymble. The Zenith Theatre stages both musicals and drama. The Willoughby Symphony Orchestra is based in Chatswood. Two dance companies share the Dance and Music Centre. A Chinese Cultural Centre has existed since 1996.[10] The Willoughby Historical Society runs the Willoughby Museum in Boronia, a Federation cottage in South Chatswood. The Concourse, Chatswood, a new cultural centre, was commissioned by Willoughby Council in 2007 and was completed in 2011. It includes the 5,000 m² Chatswood Library, a 1,000-seat concert hall, 500-seat theatre, exhibition spaces, commercial spaces, cafes and restaurants. The Concourse was opened on 11 September 2011 by the Governor of NSW, Her Excellency Professor Marie Bashir AC CVO. 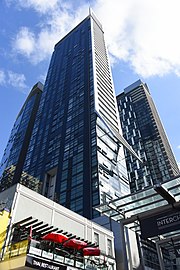 High-rise buildings in the commercial area of Chatswood

Chatswood has both public and private primary and secondary schools. These include:

The Mowbray House School operated in Chatswood from 1906 until its closure in 1954. The Church of England Girls' School Chatswood was also formerly located in Chatswood, having been closed since the 1940s.

Chatswood Oval is located south of the railway station. Beauchamp Park, located on Nicholson Street, features a playground, an oval, a fenced dog area and a bike track. It was named after William Lygon, 7th Earl Beauchamp, the Governor of New South Wales. In 2015 a memorial to the Armenian community was erected in the park. Another small but well-laid out park, with an industrial heritage theme, is the Mashman Park on Victoria Avenue at Septimus Street. This park pays tribute to the Mashmans brick and tile works that once stood there. Chatswood is close to Lane Cove National Park.

July 2016 saw the unveiling of Bartels Park in Chatswood West. Named in honour of the recently deceased former Willoughby Mayor Greg Bartels, the park is the former Edgar Street reserve.

The Garden of Remembrance, near the railway station, commemorates the fallen men of the suburb who fought in the Boer War, World War 1, World War 2, The Korean War and Vietnam War. The roses were all grown from original cuttings of briar roses taken from the Somme region of France where more than one million soldiers were wounded or lost their lives at The Battle of Somme in 1916. At the centre of the Garden stands the Willoughby Council Peace Tablet, which commemorates the signing of The Treaty of Versailles in 1918.

Many notable Australians who have contributed to Australian culture and society have lived or were educated in Chatswood. These include:

6083.32 km
No Reviews
Favourite
Link to Town: Chatswood
The staff at 1300SMILES are dedicated to providing our patients with a combination of the best treatment and prevention for your teeth. 1300SMILES is a full-scale dental practice that offers a range of services to accommodate the whole family’s needs. Read more…
Previous
Next
Get Directions
Australia for Adventurers and Dreamers Map

6083.32 km
No Reviews
Favourite
Link to Town: Chatswood
The staff at 1300SMILES are dedicated to providing our patients with a combination of the best treatment and prevention for your teeth. 1300SMILES is a full-scale dental practice that offers a range of services to accommodate the whole family’s needs. Read more…
View all business in Chatswood
Facebook
How to whitelist website on AdBlocker?