Hockey Victoria (HV) is the governing body for the sport of field hockey in Victoria, Australia. It is responsible for the administration of intrastate competitions, state representative teams, officials and the financial position of the sport. Its office is located on the ground level of the State Netball and Hockey Centre, in Parkville, a central suburb of Melbourne.

HV is run by a small number of full- and part-time staff, including In September 2010, the HV logo was changed under a directive from Hockey Australia to bring the logos of all the State and Territory Associations into alignment, to demonstrate "that [the] sport is working together for the betterment of [its] members, ... [and to] demonstrate a modern and innovative look and feel and present [the] sport in a more professional way"[1]. This new series of logos uses the same image, an abstract person holding a hockey stick, for all Associations with the variation being provided in the colour scheme. HV's new logo uses navy blue, the traditional colour for Victoria, and orange, the alternate colour used by Victorian state teams in the event of a colour clash.

HV administers a statewide, club-based competition, where self-administering clubs enter teams into the competition. All competitions are based on a promotion-relegation system of advancement, as outlined below.

Diagram of the openage competition structure

In 2008, there were five State League grades for men and four for women. There is a maximum of ten teams per grade in State League. If a new club was to enter State League, they would have to enter at the lowest grade and earn promotion to the higher grades.

Clubs may have one team in each grade of Pennant/Metro competition. They progress by earning promotion from lower grades to higher grades. Grades are typically limited to 10 teams per grade, although Metro may have fewer teams depending on team entries for that year. Pennant grades are statewide, but Metro grades are district-based to minimise travel distances. The Pennant/Metro grades are ranked as follows:

Pennant/Metro/Masters competitions have a three-week finals series as follows:

Teams finishing in the bottom two places of each pennant grade after the regular season are relegated to the next lowest grade in that competition. For example, the teams finishing 9th and 10th in PB will be relegated to PC for the next season. Teams being relegated from PD/PE to M1 will go to the most appropriate district of M1 if possible, with one team going to each district. Likewise for teams being relegated from M1 to M2.

Competition in the Underage competition is based on age, gender and grade. HV operates competitions for age groups under-16, under-14, under-12. Competitions also exist for under-18 and under-10. Under 18 and Under 10 are not graded competitions.

In each age group there are several grades, depending on team numbers, as follows:

There is a nominal limit of 10 teams per grade, but this is relatively flexible depending on team entries.

Promotion is based on the performance of a club over a number of years, and is re-examined every year. For example, a team that finished on top of U14PNW may not necessarily be promoted to U16A the following year if that team are all top-age players (hence ineligible for U14 the next year) and the next group of players have performed poorly (for example the U14PNW team finished last in the same year).

Age groups are taken from 1 January that year. For example, a player who is 13 on 1 January would be eligible for U14 and U16 grades.

The A-grades have perpetual shields named after notable hockey personalities in Victoria:

All junior grades from U12 to U18 play a two-week finals series as follows:

As for other competitions, 18 rounds are played and there is a limit of 10 teams per grade, except in the bottom grade. 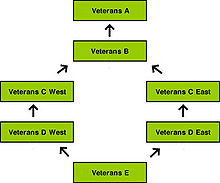 Diagram of the overage competition structure

Grades for the over-35 and over 45 tier are ranked as follows:

Over-50s are colloquially known as "SuperVets" and play in either A or B.

Teams finishing in the bottom two places of each grade after the regular season are relegated to the next lowest grade in that competition. For example, the teams finishing 9th and 10th in VA will be relegated to VB for the next season. Teams being relegated from VB to VC will go to the most appropriate district of VC if possible, with one team going to each district.

Over summer HV runs an Indoor competition. There are competitions for men and women.

There are also underage competitions for under-18, under-15 and under-13 boys and girls.

A Victorian club championships for indoor is held each year. This runs in the age groups of Under 18, Under 15 and Under 13.

HV runs a number of intrastate tournaments throughout the course of the year.

Held during the week leading up to the first weekend in July, this was the premier intrastate Championship in Victoria. It consisted of five representative zones competing in a round-robin competition in under-13, under-14 and under-15 age groups in boys and girls competition. U13 and U15 State teams (or final trial squads) were selected from this tournament. Likewise this was the selection tournament for officials such as umpires to attend National Championships.

The competing zones were:

At the completion of the 2009 JSC, there was significant speculation that the structure of the Championship would be radically changed. Later that year, HV announced that the number of zones would increase from five to ten (6 metropolitan and 4 regional) and that the structure of JSC would be modified to reduce the time over which it was played. The age groups were revised to be U13 and U15 (run concurrently at the same event in July) and U17 (run separately in October). This brings the State Championships into alignment with the Hockey Australia National Championships (the U17 event provides players that will be U18 in the following April, when the U18 nationals is usually held).

The new zones are as follows:

Traditionally held over the Labour Day long weekend in March, this was a zone-based development tournament. There were typically 10 zone teams selected (Bayside, Central Suburbs, Western Suburbs, Western Highway, Outer Suburbs, Central State, Southwest Districts, Gippsland, Upper Murray, Murray Valley) and they competed in a round-robin phase, with a finals series on the Monday. Zone teams were selected from trials based on the senior club the players play for. This tournament was run for the last time in 2010, being replaced by the U17 State Championship (see above)

Affiliated regional associations are invited to send teams to compete in the Country Champs. A senior & veterans competition is held over the Queen's Birthday long weekend in June, and a junior competition was held on the last weekend in June, immediately preceding the Junior State Championships.

A round-robin tournament is held at the conclusion of each VicStix development program, as a way for the participants to showcase the skills they have learned throughout the program. As VicStix is regionalised, it is straightforward to play each region off against the others. It is typically run during March.

HV enters state representative teams in all national championships run by Hockey Australia. These include:

The traditional colours of the state uniform are navy blue with white highlights, and the alternate colour (particularly used for socks) is orange. Kombat was the official uniform supplier of HV from 2003 to 2009, when Victorian-based Cramark took over the contract. Speculation amongst players was that Kombat was too expensive and too slow, and this local manufacturer could produce uniforms quicker and cheaper. This was short-lived, however, as it appears Cramark went out of business. Kukri is now the official uniform supplier, as it is for almost all of the other States and Territories and the Australian national teams.

Under Kombat, the "Big V" (a white V shape on the front of the navy blue shirt, stretching from shoulder to navel to shoulder) was reserved only for Victoria's premier teams, the Vikings and Vipers. Cramark and Kukri have since introduced that design to all state teams from U15 upwards. The alternate is a white shirt with a blue V.

HV has been involved in the implementation of its own statewide skills development program known as VicStix. It has also been active in providing affiliated clubs and associations with the tools to run the Hockey Australia-accredited programs for primary-school-aged children, and Rookey programs for younger children.