Bundanoon /ˈbʌndəˌnuːn/ is a town in the Southern Highlands of New South Wales, Australia, in Wingecarribee Shire, on Gandangarra and Dharawal Country (where these two countries meet).[2] At the 2016 census, Bundanoon had a population of 2,729.[1] It is an Aboriginal name meaning "place of deep gullies"[3] and was formerly known as Jordan's Crossing. Bundanoon is colloquially known as Bundy/Bundi.

Bundanoon, like its fellow Southern Villages of the Southern Highlands, has had a boom-and-bust economic cycle. The town became a well-known tourist destination early in the 20th century; its picturesqueness and the scenery of what is now Morton National Park, combined with being served by the railway network, made it a pleasant and convenient holiday area for city dwellers who could not afford more expensive accommodations at the popular Blue Mountains resort area. By the 1950s, however, changes in lifestyle, particularly the affordability of the motor car, gave city dwellers more options and Bundanoon declined.

The Sydney real estate boom of the early 21st century made Bundanoon an affordable haven within commuting distance of the city. Property values increased several-fold, and houses in Bundanoon were selling for over a million dollars by 2007.

Several houses in the town were destroyed by a bushfire in January 2020.

The 2016 census recorded 2,729 people living in Bundanoon. The town's population was significantly older than the general population: their median age was 56 years, 18 years older than the national median age of 38. Children aged under 15 made up 13.8% of the population (fewer than the national average of 18.7%) and people aged 65 years and over made up 36.0% of the population (more than double the national average of 15.8%). This is reflected in the low workforce participation, with only 1,078 of the 2,729 people reporting themselves as being in the labour force. Of these, 49.6% were employed full-time, 41.7% were employed part-time and 4.2% were unemployed.[1]

Anglican: Part of the Sutton Forest parish.[4] In 1879, Holy Trinity Anglican church was built on its present site. (The timber church was destroyed by bushfire in December 1904; rebuilt in stone in 1905.)[5]

Catholic: Part of the parish of St Paul's in Moss Vale.[6] St Brigid's Catholic Church was built in 1895. Prior to that, Roman Catholic services were conducted at Sutton Forest.[5] 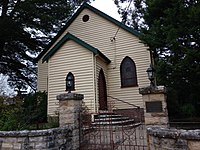 Uniting: Part of the Moss Vale–Bundanoon–Robertson parish.[7] By 1870 the Primitive Methodist Church was established on the corner where the Soldiers’ Memorial Hall now stands. The Primitive Methodists moved to a new building in 1885 (now the Uniting Church) and leased the original site to shop owners.[5]

The Primitive Methodist Church hall served as the first school, with Mrs Dinah Osborne as teacher. A new school of two rooms was built in 1880 and is still used as the school library.

Bundanoon has a number of heritage-listed sites, including:

The town was originally named Jordan's Crossing. The change of name for post office was gazetted in April 1881,[13] although it had been reported as "Bundanoon township at Jordan's Crossing" when a meeting was held in 1870 to establish the public school.[14]

Established in the early 1980s, the Bundanoon History Group meets once a month in The Old Goods Shed, where its collection of photographs and written records are held.[15]

In July 2009 "Bundy on Tap",[16] a community initiative in Bundanoon, declared itself opposed to the sale of bottled drinking water on environmental grounds; local businesses instead committed themselves to filling re-usable bottles with tap water on request.[17][18] The issue of bottled water was to protest against companies Norlex and Coca-Cola (that owns Australian bottled water brands Neverfail and Mount Franklin) extracting water from the town's groundwater.

In January 2020 the town was affected by a bushfire during the 2019–20 Australian bushfire season. Several homes were destroyed.[19][20]