Previous Next
Town in Western Australia

Broome is located on Western Australia's tropical Kimberley coast on the eastern edge of the Indian Ocean.

Being situated on a north/south peninsula, Broome has water on both sides of the town. On the eastern shore are the waters of Roebuck Bay extending from the main jetty at Port Drive to Sandy Point, west of Thangoo station. Town Beach is part of the shoreline and is popular with visitors on the eastern end of the town. It is the site of the 'Staircase to the Moon', where a receding tide and a rising moon combine to create a stunning natural phenomenon. On "Staircase to the Moon" nights, a food and craft market operates on Town Beach.

Roebuck Bay is of international importance for the millions of migrating waders or shorebirds that use it seasonally on migration through the East Asian – Australasian Flyway from their breeding grounds in northern Asia. They feed on the extensive intertidal mudflats and roost at high tide on the red sand beaches of the bay. They can be seen in the largest numbers in summer, but many of the younger birds remain throughout the first and second years of their lives. The Broome Bird Observatory, sited in pindan woodland close to the northern shore of Roebuck Bay, was established by Birds Australia in 1988, and formally opened in 1990. The purpose of the observatory is to study the birds, learn how to protect them and educate the public about them.

A mixed black flying fox and little red flying fox colony of around 50,000 megabats lives all year in mangroves next to Broome township's small Streeter's Jetty. They chatter and socialise loudly before flying out at dusk each evening. The bats are key pollinators and seed dispersers for native trees and plants. 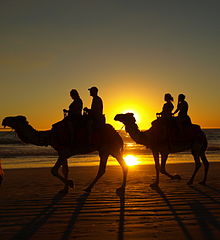 Tourists riding camels at Cable Beach in Broome at sunset.

Named for the Java-to-Australia undersea telegraph cable that reaches shore there, Cable Beach is situated 7 km (4.3 mi) from town along a bitumen road. The beach itself is 22.5 km (14.0 mi) long with white sand, washed by tides that can reach over 9 m (30 ft).[3] Located directly east of Cable Beach over the dunes is Minyirr Park, a coastal reserve administered by a collaboration of the Shire of Broome and the Yawuru people.

Broome is situated on the traditional lands of the Yawuru people.[4]

It is often mistakenly thought that the first European to visit Broome was William Dampier in 1688, but he only visited the north of what was later named the Dampier Peninsula. In 1699 he explored the coast from Shark Bay to La Grange Bay, from where he headed north leaving the Australian coast. Many of the coastal features of the area were later named for him. In 1879, Charles Harper proposed the formation of a Government Station at the Roebuck Bay Pastoral and Agricultural Association's site at Cape Villaret, at the south end of Roebuck Bay, to provide facilities for the extension of the Pearl Shell Fishery, and to form a port and base of operations for intending pastoral and agricultural settlers.[5][6] In 1883, John Forrest chose the site for the town, and it was named after Sir Frederick Broome, the Governor of Western Australia from 1883 to 1889.[7]

The 1880s saw the commencement of Broome's pearling industry, which initially involved slavery[8] and indentured labour,[9] pearl diving being an occupation reserved for specific ethnic groups, most prominently from Japan and followed by other Asian countries. This led to numerous racially motivated conflicts, most notably the 1920 race riots between Japanese and Malay residents, resulting in 8 deaths and at least 60 injuries.[10] The Broome community came to "reflect the hierarchy of the pearling industry, which was based on occupation and ethnicity".[11] White collar occupations and positions of power were exclusively held by Europeans. As a consequence, racial segregation was common in Broome until the 1970s.[11]

In 1889, a telegraph undersea cable was laid from Broome to Banjuwangi, East Java, connecting to England. Hence the name Cable Beach given to the landfall site.[7]

Broome was attacked at least four times during World War II as part of the Japanese air raids on Australia. The worst attack in terms of loss of life was an air raid on 3 March 1942 in which at least 86 people (mostly civilian refugees from the Dutch East Indies) were killed, making it the second deadliest Japanese attack on Australia after the bombing of Darwin. Twenty-two aircraft were destroyed, most of them flying boats, the remains of which can still be seen in the harbour at low tide.

In 1950, Broome was the setting for Arthur Upfield's novel The Widows of Broome, his 12th novel featuring Detective Inspector Napoleon Bonaparte ("Bony"). 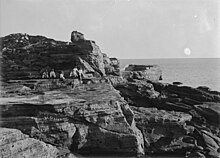 Dinosaur footprints dated as Early Cretaceous in age (approximately 130 million years ago) were discovered 30 m (98 ft) out to sea at Gantheaume Point in the 1960s. The tracks can be seen only during very low tide. In 1996, some of the prints were cut from the ground and stolen, but have since been recovered.[12]

Broome entered into a sister city agreement with Taiji, Japan in 1981 as historic ties between the two towns date back to the early 1900s, when Japan became instrumental in laying the groundwork of Broome's pearling industry. The annual dolphin hunt in Taiji was the subject of the 2009 documentary The Cove, and sparked a unanimous decision by Broome's council, headed by Graeme Campbell, to end the relationship with Taiji if the dolphin hunt were to continue. The decision was reversed in October 2009.[13]

2012 Save the Kimberley campaign

The Broome community led a campaign to protest against a proposal to industrialise the James Price Point outside Broome. The campaign has received ardent support from public figures such as John Butler, Missy Higgins, Clare Bowditch and former leader of the Australian Greens, Dr Bob Brown. A concert for the campaign was held on 5 October 2012 at Federation Square in Melbourne and was attended by approximately 6,000 people.[14] A long term protest camp operated at James Price Point. One of the campaign points was to protect the significant 'dinosaur highway' of dinosaur tracks that are found in the intertidal zone outside Broome. The campaign has since remained a divisive topic amongst locals, with many blaming the 'no' decision for the slow economic growth that characterises the region.

Fossilised Megalosauropus broomensis dinosaur footprints dated as early Cretaceous in age are 30 m (98 ft) out to sea at Gantheaume Point. The fossil trackway can be viewed during very low tide. Plant fossils are preserved extensively in the Broome Sandstone at Gantheaume Point and in coastal exposures further north.[15][16]

The fossil trackways at Broome include possibly the largest known dinosaur footprints, sauropod tracks upwards of 1.7 m (5 ft 7 in) long. It is suspected that the sauropod that made these tracks might have been 7–8 m (23–26 ft) tall at the hip.[17][18]

The town has a history based around the exploits of the men and women who developed the pearling industry, starting with the harvesting of oysters for mother of pearl in the 1880s to the large present-day cultured pearl farming enterprises.[19]

Headstones in the Japanese Cemetery

At first, Indigenous people, especially women and girls, were forced to dive for pearls by European pearlers, and many died working in the industry. Report of abuses in the early days of pearling led to legislation in 1871 and 1875 regulating native labour and prohibiting the use of women as divers. Asians, especially Japanese, excelled at pearl diving, with many of them becoming valued citizens in the town. Indeed, many people with Japanese names thrive in the community. Pearling was a dangerous and sometimes deadly occupation and the town's Japanese cemetery is the resting place of 919 Japanese divers who lost their lives working in the industry.[11]

Each year Broome celebrates the fusion of different cultures brought about by the pearling industry in an annual cultural festival called Shinju Matsuri (Japanese for "festival of the pearl").[20]

In 2010, the Shire of Broome and Kimberley commissioned a Memorial to the Indigenous Female Pearl Divers.[21] In April 2019, the skeletons of 14 Yawuru and Karajarri people which had been sold by a wealthy Broome pearler to a museum in Dresden in 1894 were brought home. The remains, which had been stored in the Grassi Museum of Ethnology in Leipzig, showed signs of head wounds and malnutrition, a reflection of the poor conditions endured by Aboriginal people forced to work on the pearling boats. As of May 2019, the remains are being stored in Perth until facilities have been built to accommodate them in Broome.[22]

Under the Köppen climate classification, Broome has a hot semi-arid climate (BSh), being a little too dry to be classified as a tropical savanna climate (Aw);[24] like most parts of the Australian tropics, it has two seasons: a dry season and a wet season.[25] The dry season is from April to November with nearly every day clear and maximum temperatures around 30 °C (86 °F). The wet season extends from December to March, with maximum temperatures of around 35 °C (95 °F), rather erratic tropical downpours and high humidity. Broome's annual rainfall average is 615.1 mm (24.22 in), 75% of which falls from January to March.[26] Broome observes an average of 48.4 days a year that record measurable precipitation.[26] According to the indigenous Yawuru calendar, there are six seasons.[27]

Broome is home to the Sun Picture Garden, the oldest operating open-air cinema in the world.[35]

Broome is considered to be among the best places in the world to catch Sailfish.[36]

Broome International Airport is the regional air hub of northwestern Western Australia and is considered the tourism gateway to the Horizontal Falls and the whole Kimberley region.[37]

The Broome Tramway was an industrial tramway used to convey goods between Mangrove Point and the town centre from 1898 until the 1960s.[citation needed]

Since 1992 Broome has been home to a local community newspaper, the Broome Advertiser, published each Thursday, part of the Seven West Media group.[38][39] Previously Broome had a Saturday weekly newspaper, published from 1912 to 1930, The Nor-West Echo, the successor to the Broome Chronicle and Nor'West Advertiser (1908–1912).[40]