This article is about the mountain in South Australia. For other uses, see Mount Lofty (disambiguation). 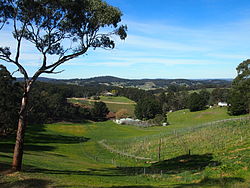 View SE across the Piccadilly Valley from the Mount Lofty Scenic Route. The summit of Mount Barker, 22 km away, is visible on the horizon. 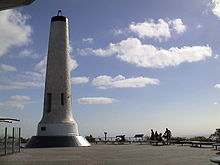 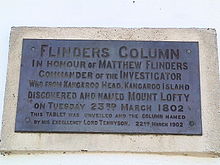 The summit can be accessed by road from the South Eastern Freeway at Crafers, and from the eastern suburbs via Greenhill Road and the Mount Lofty Scenic Route. The more enthusiastic can walk up the gully from Waterfall Gully, through the Cleland Conservation Park and from Chambers Gully. The track from Waterfall Gully to the summit is a 4 km uphill trek and one of Adelaide's most popular exercise circuits so the carpark at the bottom is often busy. The summit provides panoramic views across Adelaide, and a cafe-restaurant and gift shop. These are relatively new due to protracted disputes over appropriate development following the destruction of the old cafe in the 1983 Ash Wednesday fires. Kangaroos are often spotted on the trails leading up to the summit cafe.

On the ridge near the summit are three television transmission towers (the northernmost being that of the ABC), and the Mount Lofty Fire Tower operated by the Country Fire Service.

The summit has become a popular spot for tourists to Adelaide, and also for cyclists coming up the old Mount Barker Road through Eagle on the Hill; this former section of National Highway No.1 has been superseded by the Heysen Tunnels.

European discovery and use

Mount Lofty was named by Matthew Flinders on 23 March 1802 during his circumnavigation of the Australian continent.[2] It was first climbed by a European when the explorer Collet Barker climbed it in April 1831, almost six years before Adelaide was settled.

A stone cairn at the summit was originally used to mark the trig point, and in 1885 this was replaced by an obelisk which served as the central reference point for surveying purposes across Adelaide. In 1902 the obelisk was rededicated and renamed as the "Flinders Column".[3]

Summit Road, Mt Lofty, was one of the best-known addresses in South Australia, with the summer houses of several prominent families being located there. These were all destroyed or severely damaged by the Ash Wednesday bushfires in 1983, but have subsequently been restored.[4] They include:

Other buildings, such as "St. Michael's Monastery" (an Anglican church retreat) and "Arthur's Seat", for a time known as Stawell School, a private school for girls, were never rebuilt.[9] Part of this property was excised for the ABC-TV transmitter building and mast.

Note that historically, "Mount Lofty" addresses frequently referred to the area now known as Crafers and to parts of Stirling.

Due to Adelaide's mild winters, temperatures cold enough to produce snow in the Adelaide metropolitan area never occur, and the nearest snowfields to Adelaide are in eastern Victoria, over 700 km away. However, light snowfalls (rarely lasting for more than a day) are not uncommon on the summit (although it is possible for Mount Lofty to go two or three years without any snowfall.) This is a huge novelty for the approximately 1.4 million residents of the Adelaide Plains, (particularly for the children), and a photograph of the event has made the front page of the local newspaper multiple times in the past.[10] Mount Lofty is the coldest location in the Adelaide area; during winter months the temperature may not exceed 3-4 °C on some days. The summit is the most common location for snow in South Australia; rare snowfalls sometimes occur in other parts of the Mount Lofty Ranges, and occasionally further north, in the Flinders and Gammon Ranges.[11]

View of Adelaide Plains at night from the summit.

View of the eastern suburbs, the Adelaide city centre and the Gulf St Vincent at sunset from the summit.
source: https://en.wikipedia.org/wiki/Mount_Lofty
Get embed code