For a field where tenters were kept, see Tenterground.
Town in New South Wales, Australia

Tenterfield is a regional town in New South Wales, Australia. At the 2016 census, Tenterfield had a population of 4,066.[1] Tenterfield's proximity to many regional centres and its position on the route between Sydney and Brisbane led to its development as a centre for the promotion of the federation of the Australian colonies.

Tenterfield is located at the northern end of the New England region, at the intersection of the New England and Bruxner Highways. The town is the seat of the Tenterfield Shire.[2] The closest nearby large town is Stanthorpe, Queensland, being 56km north via the New England Highway. Tenterfield is three hours from Brisbane, Queensland (276km), three hours from Byron Bay, New South Wales (205km), two hours from Armidale, New South Wales (188km) and eight hours from Sydney (663km). The town is on the north-western stretch of the Northern Tablelands plateau, a spur of the Great Dividing Range, and is nestled in a valley beneath Mount Mackenzie (1,287m elevation), one of the highest points along the Northern Tablelands.

Tenterfield's first inhabitants were the Jukembal people who travelled the area from near Glen Innes to Stanthorpe, Queensland. 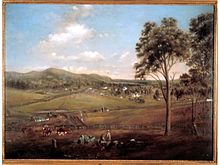 In 1841, Sir Stuart Donaldson was running 18,000 sheep on a property that he named Tenterfield Station, after a family home, Tenterfield House, in Haddington, Scotland.[3][4] Donaldson was the first premier of NSW and made biannual trips to Tenterfield to inspect his holdings there, which covered 100,000 acres (400 km2) of unfenced land. Tenterfield Post Office opened on 1 January 1849[5] and the township was gazetted in 1851 with allotments being sold in 1854. In 1858 gold was discovered at Drake (Fairfield) and shortly afterwards at Timbarra and Boonoo Boonoo.[6] During 1859 an AJS Bank opened and an Anglican church was built the following year. In the 1860s the Tenterfield Chronicle was published, the district court was established; the building of a hospital commenced and a public school was opened. In 1870 the population was less than 900, but the town had five hotels, a school of arts and three churches. The existing Tenterfield Post Office was constructed in 1881.

During World War II, Tenterfield was earmarked as a key battleground if the Japanese should invade Australia. During 1942 thousands of soldiers were set up in emergency camps, unbeknown to the locals, to cope with such an event. Overgrown tank traps and gun emplacements can still be seen on the Travelling Stock Route near the New England Highway.[7] The highway was until the early 1950s the only all-weather road from Sydney to Brisbane.

Tenterfield has a number of heritage-listed sites, including:

Another notable landmark of Tenterfield is Flanagan's Men's Shop, along the western side of the main strip of Rouse Street, which is believed to be the oldest constantly men's wear shop in all of Australia.[citation needed]

There was considerable debate about whether the break of gauge should take place at the existing town of Tenterfield, or at a whole new town at the border at Wallangarra.[16]

Sir Henry Parkes delivered his Federation Speech, commonly referred to as the "Tenterfield Oration", in the Tenterfield School of Arts on 24 October 1889.[15] He was travelling from Brisbane to Sydney, via the new Main North railway. The speech is credited with re-igniting the debate that ultimately led to Federation on 1 January 1901. Parkes never got to see his oration come to fruition, dying 5 years prior to the Federation of Australia.

According to the 2016 census of Population, there were 4,066 people in Tenterfield.

The only commercial radio stations serving Tenterfield are Rebel Media stations, Rebel FM and The Breeze which broadcast into the area from Queensland on local FM transmitters.

100.9 Triple Z FM, based in Goonellabah NSW runs radio advertisements for services that run from the coast to as far inland as Tenterfield and Glen Innes, and can be tuned into from higher elevations in Tenterfield when windy and anywhere in town on windless days.

Tenterfield's local newspaper is The Tenterfield Star, which is a weekly newspaper issued each Wednesday. The newspaper has been published for more than 170 years and was once owned by J. F. Thomas, the solicitor who defended Breaker Morant.

Tenterfield is incorporated into the Lismore television licence area and as such receives regional news bulletins on Prime7 and NBN Television along with brief local news updates on Southern Cross Ten.

The local geography is dominated by prominent granite inselbergs and mountains, the most famous being that of Bald Rock, which sits within the Bald Rock National Park, and Bluff Rock which is located 12 minutes drive south of Tenterfield on the New England Highway. Prominent natural landmarks close to Tenterfield are:

Tenterfield has a subtropical highland climate, with cold, frosty winters and moderately hot, wet summers. It sits at an altitude of 850 metres (2,790 ft) above sea level, meaning temperatures below freezing in winter are common. Tenterfield averages 47 days where the minimum temperature drops below 0°C each year.[18] The town receives light to moderate snowfalls during severe winters, but this only occurs once every 20–30 years, but the town experiences occasional sleet. The nearby Mount Mackenzie (1,287m elevation) generally receives light, sometimes moderate, snowfall annually. The town's last snowfall occurred during the winter of 2015, although, the most recent snowfall close to Tenterfield was on the 4th of June, 2019, when a low pressure system swept north through NSW. This caused it to snow on Mount Mackenzie and other points above 1,000m throughout the New England region. [19] Summers are moderately warm to hot, with most days during the summer months reaching 23°C and above, and not dropping below 15°C overnight. The majority of precipitation occurs as thunderstorms, which can be severe. Tenterfield's highest recorded temperature was 39.9 °C, which was recorded on 12 February 2017. Its coldest recorded temperature was -10.6 °C, which was recorded on 10 July 2006.

On the 6 September 2019 a grass fire started near Mount Mackenzie Road to the south west of Tenterfield, The fire was aided by dry winds and unseasonable heat due to a weather front that was sweeping across New South Wales. Within an hour the fire was upgraded to an emergency level threat and it swept across the southern edge of the town. All schools in Tenterfield were evacuated[20] and power was cut to the town. 65 homes in the immediate area of the fire were saved.[21] one home was destroyed and 4 other homes damaged severely. 2 car yards, a pistol club and 12 outbuildings were destroyed and another 8 outbuildings damaged[21] A 66 year old Tenterfield man, Neville Smith, a volunteer NSW firefighter was severely injured when the fire truck he was in was engulfed with flames while defending a property,[22] he was stabilised at Tenterfield Hospital then airlifted to Brisbane in a stable but critical condition.[22]

The fire continued to burn with an emergency warning throughout the night and was later downgraded by the New South Wales Rural Fire Service to a 'watch and act' level on 7 September as conditions on the fire grounds were easing due to cooler weather and large teams of firefighters with multiple aircraft assisting them with the fire.

The "Tenterfield Saddlery" made famous by Peter Allen