The Lachlan River is an intermittent river that is part of the Murrumbidgee catchment within the Murray–Darling basin, located in the Southern Tablelands, Central West, and Riverina regions of New South Wales, Australia.

The Lachlan River is connected to the Murray Darling basin only when both the Lachlan and Murrumbidgee Rivers are in flood. It is the only river in New South Wales with significant wetlands along its length, rather than just towards its end, including Lake Cowal-Wilbertroy, Lake Cargelligo and , and nine wetlands of national significance.[2]

The river rises on the western slopes of the Great Dividing Range in the Southern Tablelands district of New South Wales, formed by the confluence of Hannans Creek and Mutmutbilly Creek, 13 kilometres (8.1 mi) east of Gunning. The river flows generally north-west, north, west and south-west, joined by thirty-seven tributaries including the Crookwell, Abercrombie, Boorowa, and Belubula rivers before terminating near Oxley in the 500-square-kilometre (190 sq mi) Great Cumbung swamp that joins the Murrumbidgee River to the south and becomes part of the Lowbidgee Floodplain. The river descends 632 metres (2,073 ft) over its 1,440-kilometre (890 mi) course.[1][3] 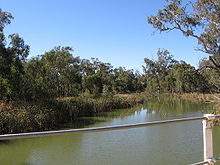 The Lachlan River at Oxley

The river is impounded by Wyangala Dam, near Cowra and Brewster Weir, located between Lake Cargelligo and Hillston; and passes through the towns of Breadalbane, Reids Flat, Wyangala, Cowra, Gooloogong, Forbes, Euabalong, Condobolin, Lake Cargelligo, Hillston, Booligal, and Oxley.

The social-ecological systems of the Lachlan River and its catchment include its upper tablelands, mixed farming slopes, through to plains, rangelands, and then lower floodplains.[6] More than 100,000 people live in the Lachlan catchment. It is estimated that 12% of the state's agricultural businesses are located from within the Lachlan River catchment.[2]

The Lachlan River is located in the traditional homelands of the Wiradjuri Aboriginal people.[7] The Wiradjuri lived along the Wambool (Macquarie), the Kalare (Lachlan) and the Murrumbidjeri (Murrumbidgee), in the area known as "the land of the three rivers."[8]

Acting-Surveyor George William Evans visited the river in 1815, naming it the Lachlan River after Lachlan Macquarie, the governor of the colony of New South Wales. The Lachlan River was substantially explored by John Oxley in 1817.[9] In the early days of colonial New South Wales, the southern part of the Lachlan was known as Fish River. It was only after further exploration that it was realised that these two rivers were the same river and the name Fish River was dropped.

The explorer and naturalist, James H B Shaw, was one of the first Europeans to write about the birds and habitat along the Lachlan River. His article appeared in the Australian Town and Country Journal (Sydney, NSW : 1870 - 1907), Saturday 7 March 1885, page 28, 29 http://nla.gov.au/nla.news-article71024608

The Lachlan River is mentioned in the Banjo Paterson poem Clancy of the Overflow.