Hyams Beach is a seaside village in the City of Shoalhaven, New South Wales, Australia, on the shores of Jervis Bay.[2] At the 2016 census, it had a population of 112.[1] The village, 180 km south of Sydney, is bordered by two beaches, Chinaman's Beach to the north and Seaman's Beach (sometimes referred to as "Sailors Beach") to the south, with Hyams Beach being in the centre. A seaside resort, its beach is known for having turquoise/aqua-coloured waters and fine, squeaky, brilliantly white sand that's composed of pure quartz.[3] The village is a 3-hour drive from Sydney and can be accessed via Princes Motorway from the Sydney CBD or Hume Motorway from Greater Western Sydney.[4] 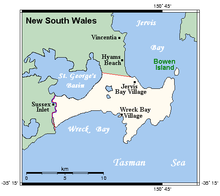 The beaches face east, out across Jervis Bay and Point Perpendicular to the Pacific Ocean. The village is bordered by Jervis Bay National Park to the north and Booderee National Park and Botanic Gardens to the south which gives Hyams Beach a 'natural bush' feel with an abundance of native plants, animals and birdlife. Other nearby attractions include Jervis Bay Marine Park and surrounding trails and forests.[5]

There is a myth that the beach has the whitest sands in Australia.[6][7][8] The misconception started at the town's main store, which had a billboard stating the seaside village had "the whitest sand". Eventually, the idea became widespread and was promoted by tourism organizations. In fact Australia's whitest beaches are Lucky Bay and Hellfire Bay near Esperance, Western Australia, and Tallebudgera Creek Beach in Queensland.[9]

A view of its renowned white sands.

Most accommodation in the village ranges from basic cottages to architecturally designed luxury beachfront houses, with some featuring bed and breakfast. There is one café store in the village. The seaside village also features bush and coastal walks which provide panoramic views of the bay, the surrounding National Park and the ocean, which is ideal for fishing, swimming, snorkelling, diving and also whale watching, making it an ideal tourist spot. The encompassing bushland is home to many native animals and dozens of bird species.

Tourism and infrastructure financed has assisted in transforming Hyams Beach to one of the popular areas within the NSW tourism industry. Due to tourists visiting the area frequently and in masses, a freeway reaching the whole 190 km to Sydney was finished in 2017, costing at $580 million. A NSW tourist movement has featured the beach's radiantly white sand on the rearside of Sydney buses. The seaside village has also appeared in TV ads, thanks to its publicity by Lonely Planet and also has a large social media presence.[10]

The village's success is known to backfire with its population of 112 quickly spiring to 4000 people in a few summer evenings, with the streets becoming engulfed with traffic and tourists littering on the beach. Because of this, local residents have been pressing council to resolve the safety issues. There is only one road in and out, so when the village is overrun by cars, access for emergency vehicles and evacuation in case of bush fire becomes impossible. Now the council is closing the village once the 450 street parking spaces are at effective capacity. The local bush care group is working hard to revegetate the dunes which have been badly damaged by tourists who have been pushing into the dunes for shade or to find an illegal camping spot.[10][11]

In the 2016 Australian census, Hyams Beach appeared to be wealthy for a beach resort with 20% of its inhabitants earning more than $3000 a week, 90% owning their home and with 93% of the houses having three or four bedrooms.[1]