The City of Shoalhaven is a local government area in the south-eastern coastal region of New South Wales, Australia. The area is approximately 200 kilometres (120 mi) south of Sydney. The area is located adjacent to the Tasman Sea. The Princes Highway passes through the area and the South Coast railway line traverses the northern section of the area and terminates at Bomaderry. At the 2016 census, the population of the City of Shoalhaven was 99,650.[1]

The City was established on 1 July 1948 as the Shoalhaven Shire following the amalgamation of the Municipalities of , , , Ulladulla, , and the shires of Cambewarra and Clyde.[4]

The Mayor of Shoalhaven City Council is , who is a member of the Greens. She defeated the incumbent mayor Joanna Gash on preferences at the 2016 elections.

Modern-day groupings of the Illawarra and South Coast Aboriginal peoples are based on information compiled by white anthropologists from the late 1870s. Two divisions were initially presented (refer Ridley, 1878), using geographical location and language, though these criteria are now expanded into five divisions and given Aboriginal names, as follows (after C.Sefton, 1983):

*Dharawal - general name for the Aboriginal people of the area on the east coast of New South Wales from Botany Bay to Shoalhaven, and west to Berrima and Camden.

* (or Wadi-Wadi) - a subdivision of Thuruwal, includes the Aboriginal people of the coast from Wollongong to Shoalhaven.

* and (or Dharumba) - those people living around the Shoalhaven River.

The Jerrinja people record their traditional lands as stretching from Crooked River in the north to Clyde River in the south, from the mountains to the sea at .[5]

George Bass explored the area in 1797, following Seven Mile Beach. He crossed the shoals at the entrance to the river, calling it "Shoals Haven" due to the shallowness of the river mouth. This river is now known as the Crookhaven,[6] but the name was adopted for the Shoalhaven area and the Shoalhaven River. 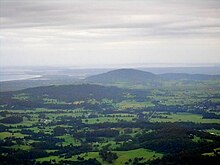 A large part of Shoalhaven can be seen from the area in Barren Grounds Nature Reserve. Mount Coolangatta is in the centre, with Jervis Bay in background and Berry in the right front 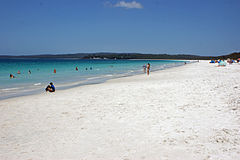 Shoalhaven, although designated a city, is a dispersed region spread over 125 kilometres (78 mi) of coastline, with the vast majority of its population located in the north-east around Nowra, Jervis Bay and Sussex Inlet.

It includes the following towns, suburbs and localities:

Localities with no population in 2016 included:

Shoalhaven City Council is composed of thirteen Councillors, including the Mayor, for a fixed four-year term of office. The Mayor is directly elected while the twelve other Councillors are elected proportionally as three separate wards, each electing four Councillors. The most recent election was held on 10 September 2016, and the makeup of the Council, including the Mayor, is in order of elected and as follows:[7]

The current Council, elected in 2016, in order of election by ward, is:

The Shoalhaven can be reached from Sydney by car via the Princes Highway and by rail via the South Coast railway line which terminates just north of Nowra at Bomaderry. The Shoalhaven is adjacent to the well known Jervis Bay area. The area is approximately 160 kilometres (99 mi) long along the coastline, including 109 beaches, which allegedly possesses the whitest sand in the world, as well as pristine natural Australian bushland. The Shoalhaven area is home to numerous species of native Australian flora and fauna.[12]

The area is well known for its strong commitment to the arts and music, featuring the See Change and See Celebrations festivals in the Jervis Bay and St Georges Basin areas, as well as the and Blessing of the Fleet in the Ulladulla area.[13]

Heritage listings for the City of Shoalhaven include: