Biriwal Bulga National Park is a protected national park located approximately 45km north west of Taree and 60km west of Port Macquarie on the Bulga Plateau[2]. The national park contains some biodiversity and ecosystems as well as Indigenous Australian culturally significant sites. The residents of the park range from animals to trees and bushes. The animals reside in an escarpment terrain. The park’s soil varies in depth depending on the slope. There is a higher than average amount of annual rainfall which attributes to the types of native plants found[2]. There are different conservation and management plans in place to maintain the natural and cultural heritage of the park whilst also providing research opportunities for visitors. The plans are set out and authorised by NSW National Parks and Wildlife Services. Some plans include conservation regions for koalas and plants, limiting the spread and influence of pests and prevention of potential bushfires.

The name Biriwal Bulga originates from the Indigenous Birpai or Biripi people which have resided in the area for over 15,000 years[3]. The spoken language of the Indigenous Australians within the local neighbourhood was the Birpai speech[3]. The community language spoken in the tribes surrounding the Birpai people was Gadjang[3].

There are campsites and artefacts found within the park which indicates the habitation of Indigenous Australians within the area. Truyard Pty. Ltd estimated that originally there were anywhere from 800 to 1000 Indigenous Australians that inhabited in the national park and surrounding regions[4]. The people were dispersed throughout the land and in smaller clan groups, with the most prominent being the Winmurra people[2].

Exploration occurred initially in the surrounding areas of Biriwal Bulga in the 1800s after European settlement[2]. It wasn't until 1982, when settlers began making discoveries within the National Park. The date of the first discoveries, marks Biriwal Bulga National Park as one of the latest National Parks to be discovered in the Port Macquarie region[2]. Originally the park was a part of the Bulga State Forest Area. In the early 1900s, Bulga State Forest Area was predominantly utilised for timber harvesting and logging operations[4]. This resulted in the implementation of a pine plantation within the National Park[4]. In 1990, the State government placed a moratorium on further harvesting to ensure survival of the ecosystem. This resulted in the area shifting from Bulga State Forest Area to a conservation national park known today as Biriwal Bulga[4].

Biriwal Bulga is a 5813-hectare national park is situated on the northern edge of the Bulga plateau[2]. It ranges in elevation from 130m to 670m[5]. The national park's landform is predominantly dissected foothills which attributes to its elevation[4]. The most common rocks found in this national park are mudstone, shale[4]. The national park experiences an average rainfall during the year ranging from 1300-1600mm[2]. If there is vegetation cover over the land, the rainfall can potentially cause erosion of soil[4].

The site has few visitors due to the remote location and lack of accessibility for common transportation devices such as: two-wheel drive cars and bike tracks. There are no facilities or walking tracks within the national park[2]. The nearest recreational facilities can be found at the neighbouring parks; Tapin Tops National Park and at Ellenborough Falls at Elands[2].

Weelah Nature reserve is situated in the South-East of Biriwal Bulga National Park covering an area of 37 ha[5]. It contains one of the few rainforest remnants on the Bulga Plateau. This provides the reserve with the unique opportunity for research and conservation[5]. 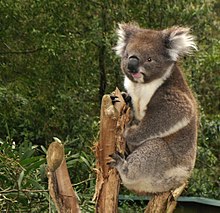 The koala, a native to Biriwal Bulga National Park

There have been seventy-four recorded fauna species within the area[2]. Amongst these seventy-four species; according to NSW National Parks and Wildlife Service, “the following are recorded as vulnerable and at risk of becoming endangered: powerful owl, glossy black cockatoo, fruit-dove, spotted-tailed quoll, brush-tailed phascogale, yellow-bellied glider, koala, long-nosed potoroo, large bent-wing bat” [2]. The most common species found in the national park are koalas. There different sub-species of koalas which interact with the natural flora forming the ecosystem within the national park[6]. These sub-species often roam and move from neighbouring regions into the national park[6]. It is estimated that there are 500-1000 individual koalas which are recorded throughout the Biriwal Bulga region[6].

There are sixteen types of plants recorded within Biriwal Bulga National Park[2]. The predominant plant found within the park are dry sclerophyll forests. During its early discovery, the park was subject to selective logging for businesses due to its dense forests[4]. The logging caused forest destruction and disturb the natural ecosystem of the park. The 1950s brought an end to all logging within Biriwal Bulga and since, the majority of forest within the park has been restored[4]. The Central Eastern Rainforest Reserves of Australia (CERRA) World Heritage Area has identified the park as a potential addition to its list as a development listing due to its undisturbed and intact rainforest[7]. Until 2004, there are no recorded threatened species of plants within the national park[7]. The Plectranthus suaveolens is listed as the only rare plant found. The plants listed as endangered by the NSW Wildlife Services are vine (Cynanchum elegans) and ground orchid (Diuris flavescens)[2].

Biriwal Bulga National Park drains the majority of its rainfall into surrounding creeks which eventually leads to the Hastings River[5]. The main body of water surrounding the national park the Doyles River, which is approximately 6km in length[5]. This is found on the South-Eastern border of the park. Inside the park, there contains two catchments of water, Green Gully Creek and Big Creek[5]. The water which leaves the national park supplies stock on some downstream farm and partially supplies Port Macquarie[2].

Biriwal Bulga national park contains different animals, some of which are considered pests and disturb the natural ecosystem of the park. The pests sighted within the area are wild dogs, foxes, pigs and cats[2]. The most prevalent danger are wild dogs, in particular, dingoes[6]. Dingoes pose threats to the native koala population within the national park. Their speed allows them to track and hunt koalas that have left their trees[6]. Foxes and pigs are also a concern for the park’s natural catchment[2]. The pests’ movement throughout the park can cause damage to the soil. This can lead to increase in erosion which cause dirt to be run-off along with the water to the park’s neighbouring catchments[4].

In addition to animal pests, there are also plants and weeds which threaten to damage the habitat[2]. In 1968-1969, a pine plantation plot was established as a trial for future pine plantation programs on the plateau[2]. These pine trees have started to disperse to the surrounding areas outside their original allocation[5]. This can cause problems if left uncontrolled as it damages the natural ecosystem of the national park[7]. There are also a number of pest plants which have invaded into the national park from the neighbouring Yarras Mountain Trail. The most common of which is known as the lantana[2].

Due to the areas densely covered forest, the national park is susceptible to fires. These fire pose as a threat to the wet sclerophyll communities which are abundant in the national park. The fires have the capability to burn the rainforest and threaten the biodiversity within the national park if they occur regularly[8]. The main type fire apparent in the Biriwal Bulga National Park is vegetation fire, most commonly known as bushfire[9].

Biriwal Bulga National Park was one of the areas affected by the 2019-2020 bushfire season in Australia. The fire burned during the periods of mid-December to mid-January. The torrential rain and large thunderstorms brought about water which helped firefighters to contain the spread throughout the park[10].

Within the National Park, there are some bacteria that pose potential problems to the wildlife which inhabit it. A bacterium pathogen dangerous to the wildlife, in particular koalas is: Chlamydia pecorum[11]. This pathogen is an infectious disease which harms koalas and potentially could cause fatality[11]. It is dangerous due to the ease of which it spreads from animals to animals. As koalas, move regularly from neighbouring regions into the national park, the spread of this disease is apparent in Biriwal Bulga[11]. There are management plans in place to restrict the influence of bacteria on the koala population within the national park[6].

The issues of pests within Biriwal Bulga National Park has been identified by the NPWS Mid-North Coast regional pest management[2]. They have included strategies such as preparing a mapping of areas within the park that display high activities of pest animals and plants. This allows for wildlife services to control the growth of pests, ensuring that they are kept only within those area. The maps allow for services to plan for conservation sites and ensure that native species have minimal interactions with pests[2]. There is a focus on park services to help control the pines surrounding the plantation area. This is to ensure the prevention of weed spreading into the natural habitat[2].

Biriwal Bulga is a national park that is recognised as a conservation site for koalas[6]. The terrain and environment surrounding the national park provide stability for steady growth of the koala population. The national park’s lack of human visitors allows for the koalas to live peacefully and undisturbed[6]. Research and surveys are suggested to be conducted to ensure that the growth of koalas is being monitored. This is to ensure that koalas are not at risk of the potential bacteria that could cause a decrease in population[6].

Biriwal Bulga’s dense forest are a concern for the bushfire seasons which occur in Australia[9]. To preserve the national park’s habitat, back-burning is a method that prevents fires from destroying the ecosystem[8]. The NSW National Parks and Wildlife Services attempts to establish strong communication with the local Rural Fire Services to ensure a fire free interval of land is maintained every 10 to 15 years[2].

To implement all the management plans mentioned above, easier access into the national park is required. The NSW wildlife service’s plan to negotiate with relevant neighbours of the park for the development of safety tracks to ensure for easier access into the park[2]. If this occurs, the park wishes to establish guidelines to ensure that visitors will not disturb the local ecosystem[2].

NSW wildlife service’s plans to promote Biriwal Bulga as a remote location that offers visitors the experience to be self-reliant in nature[2]. Facilities will not be developed and instead visitors will be encouraged to use the facilities offered by surrounding areas[2]. This encouragement can be done through signs within the park or uploading information onto the national park’s website. Services plan to monitor activities of visitors to ensure that they are following guidelines set up to ensure for safety of both visitors and the national park[2]. Suggestions for monitoring activities include surveys of how many utilise the national park as well as observing whether occupants have left belongings behind such as valuables or rubbish.