Established in 1893 at Brighton-Le-Sands,[1] Scots has a non-selective enrolment policy[4] and currently caters for approximately 1,800 students from Year K to Year 12, including 250 boarders from Year 7 to Year 12.[2] Students attend Scots from all regions of the greater metropolitan area and New South Wales country regions.

The college was formed in 1893 by three men, Archibald Gilchrist, William "Fighting Mac" Dill-Macky, and Arthur Aspinall. Gilchrist devised the school motto of "Utinam Patribus Nostris Digni Simus", which may be translated from Latin as "O that we may be worthy of our forefathers".

Arthur Aspinall, who became the first Principal, was minister to the Forbes parish from 1874 to 1887. An educated man himself, with a love of learning, he saw the need to educate the sons of the pastoralists of the area. His dream was for a boarding school in Sydney to which these very isolated farming families could send their children. Lillyan MacDonald of the Church Records and Historical Society (Uniting Church in Australia, NSW Synod) writes:

From Dr Prentis I have learnt that a Forbes influence has pervaded Scots College for more than a century through the sons of Forbes District farming families, especially the related families of Aspinall, Strahorn and Martel.

The Presbyterian Church was not happy with the proposal to start the school. Aspinall became the guarantor, advancing the capital required, while the possibility of starting the school was still a matter of bitter contention within the Church hierarchy. Thus Scots opened as a private enterprise. Once the school was established and functioning, the Church Assembly saw no reason to continue to oppose the idea of the school. In 1906 Aspinall sold the college to the Church for 7,000 pounds and so it became part of the Presbyterian education system in New South Wales.

The college was originally established at Lady Robinson Beach, now renamed Brighton-Le-Sands, near the shores of Botany Bay. The initial school building was the modified, de-licensed New Brighton Hotel on The Grand Parade, near Bay Street. The renovations to the hotel were done by Arthur Aspinall's brother, Albert Aspinall. The first Principal, the Rev Arthur Aspinall, remained in this position until his retirement in 1913. The school was officially opened 28 January 1893 by the Governor of New South Wales, the Right Honourable Victor Albert George, Earl of Jersey. Villiers Street, Rockdale was named in honour of this occasion. There were ten-day students and 25 Boarders.

The period when the school opened was a time of depression. The first few years for the school were difficult. There were 55 boys enrolled at the school when, in 1895, (soon after a racecourse had opened nearby) the school moved to its current location in Bellevue Hill.

The school occupied St Killians, the former home of Judge Josephson. Before he retired, Aspinall had added new buildings to the school and developed playing fields. The school was still surrounded by many areas of bushland which caught fire on hot summer days. Lessons would be cancelled so that the students could assist in the fire fighting. Aspinall was a stern Principal who dealt harshly with misdemeanours. Often his acerbic tongue and brilliant use of words produced ridicule more intimidating than any of his physical punishments. But he was also capable of empathy. Some promising students were educated for free when economic constraints within a family seemed likely to result in a student being withdrawn from the school.

James Bee, a New Zealander, continued the growth and expansion of the college. When he retired in 1934 there were 450 enrolled students. Alexander Knox Anderson, also a New Zealander, saw the Depression end only to be followed four years later by World War II. During World War II, Scots and its student body relocated to a purpose built campus at Bathurst, to the west of the Great Dividing Range. This was due to the proximity of the Bellevue Hill campus to the coast, and the fear of Japanese naval bombardment, a fear justified in May 1942 with the Japanese mini-sub attack on Sydney Harbour.

The Bathurst campus remained part of the school for a short period after the war, before splintering off and becoming the independent The Scots School, Bathurst.

The 75th Anniversary celebrations were held 3 to 10 May. The 1200 students at the College and past students had much to celebrate, for many former students had achieved success. In 1968 Robert Naumann was Professor of Nuclear Physics at Princeton University in the United States of America. The Guest of Honour at the celebrations, the oldest known student in 1968, was Ed Spark, a dental surgeon who had attended the school in 1894 at Lady Robinson Beach.

In 1975, a fire gutted the school's Assembly Hall, resulting in a major reconstruction and renovation of school facilities.

In 1988, the school opened its outdoor education campus, "Glengarry", in the Kangaroo Valley. Attending Glengarry is compulsory for all Year 9 boys, who live on site in one of five dormitories for six months. A residential academic and outdoor education team deliver a wide range of carefully developed personal development programs that enhance academic motivation and learning, and emphasise discipline, care, respect and curiosity. The year group is split into two intakes, they attend in terms 1 and 2, and terms 3 and 4 respectively. The Glengarry adventure now finishes with a 'Long Journey Home', which involves the intake to ride, hike and canoe their way back to Sydney from Glengarry.

Most of the Council members are elected by the General Assembly of the Presbyterian Church of Australia in New South Wales.

In August 2017, the school was forced to cancel the HSC Trial Physics exam as two CSSA papers were stolen in a late night heist.[9] The culprits are yet to be discovered. A discussion into the event was had on the HSC Discussion Group 2017 Facebook page, under the thread by Joe Connell; a friend of the physics department. That year a number of students were also suspended from the school following unsanctioned "muck-up" day activities.[10]

In March 2018 The Scots College celebrated 125 years of boys' education and opened a new campus, Brighton Preparatory School at Dolls Point, near its original site at Brighton-Le-Sands.[11]

The following individuals have served as Principal of The Scots College: 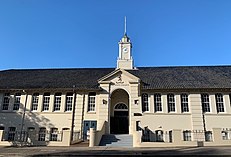 The college quadrangle finished reconstruction in 2007 to provide additional change rooms and wheelchair accessible facilities such as an elevator for the Main Building, as well as vastly improving the aesthetics of the College 'quad'.

A new Mathematics/Science building named the Graeme Clark Centre, as well as aerobics room (Bottom Level – the same level as the current pool and weights room) was constructed from early 2007 to late 2008. Classes began on Monday 17 November 2008 and the building was opened on Friday 27 March 2009.

In 2007 the new 'Ginahgulla' classrooms were completed. These classrooms house years five and six located at the Senior campus, Victoria Rd. The upper floors were renovated in 2008 and became new Languages and English classrooms.

The College was able to fund an altitude training chamber in the high-performance center. Such a device is able to alter the levels of oxygen present during sport training sessions and PD lessons. While providing benefit to the college's leading athletes, the benefit of such equipment for the institution as a whole has been publicly questioned.[13]

As a testament to its Scottish heritage, the school has a very well known pipe band: The Scots College Pipes and Drums, established in 1900. The original band consisted of five members – boys who had joined the cadets as pipers. There are now over 230 boys in the band, making it the largest in the Southern Hemisphere.[citation needed] In 1931 the band was granted permission to wear the tartan of the Black Watch regiment. The band's royal patron was formerly the Queen Mother. Traditionally, the Scots Pipes and Drums leads the annual ANZAC Day parade through Sydney. At the 2006 Australian Pipe band Championships, the Drum Corps won the Juvenile Drum Corp title, and the band as a whole earned a respectable third place.[citation needed] These results were then followed up by a successful run at the 2008 Australian Pipe Band Championships, where the band won both the Juvenile and Grade 4 title. These are the best results the band has seen in its long and prosperous history. The Pipes and Drums was recently invited and participated in the 2012 Queen's Diamond Jubilee Royal Edinburgh Military Tattoo , the 2014 Basel Tattoo and went back to Edinburgh in 2016 to participate again in the Royal Edinburgh Tattoo .

Sport has traditionally played a large role in the College and is an important part of the curriculum. The college competes in the AAGPS competition and has had notable success across a number of sports. Students must play at least one sport in summer and one in winter.

One of the most participated and prestigious sports in the School is Rugby Union. In some years the opens ages bracket has reached down to ten XVs teams. Winning in a total of 11 1st XV premierships in the AAGPS competition, which is the 4th the highest amount of premierships attained out of all the GPS schools.

Like most Australian schools, The Scots College uses a house system. Scots has 13 student houses, of which 5 are boarding houses. Each year the houses participate in multiple academic and sporting competitions, spread across the school year, and are awarded points according to their placings. This point system determines the winner of the House Championship each year (announced at a final assembly). The day boy houses contain between 90 and 95 students each, whilst the boarding houses have between 50 and 65. 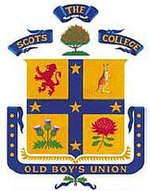 Former students of The Scots College are known as Old Boys, or alternatively Old Scotsmen, and may elect to join the school's alumni association, The Scots College Old Boys' Union (OBU). The OBU was formed in 1900, and today supports the school with financial assistance, while working to facilitate communication and interaction between the College and its Old Boys through events and activities, such as alumni and sporting reunions. Reunions are also held in various states of Australia and overseas.[14]