St Vincent’s Hospital was established in 1857 by five Irish Sisters of Charity, who had migrated to Sydney in 1838 with a mission to help the poor and disadvantaged. Some of their early work included helping victims of the 1853 influenza outbreak, and families of prisoners in the nearby Darlinghurst Gaol. Three of the hospital’s founding sisters had trained as professional nurses in France, and they brought their knowledge to the colony, establishing a hospital that was free to all people, but especially for the poor, on a non-sectarian basis.[2]

The present hospital was founded in the neighbouring suburb of Potts Point, on a site which is now St Vincent’s College. As demand grew a new hospital with 150 beds was built on its present site in Victoria Street, Darlinghurst in 1870. The architect was Oswald Lewis. The building was remodelled and enlarged after World War I and is now known as the De Lacy building after one of the founding sisters.[3]

Many notable people have died at St. Vincent's Hospital including cricket players Victor Trumper and more recently, Phillip Hughes. Prime Minister Joseph Lyons died at St Vincent's Hospital on 7 April 1939, where he had been taken after a severe heart attack two days earlier. He was the first Australian prime minister to die in office.[4]

St Vincent's is a leading medical, surgical and research facility. It has been at the forefront of innovation in areas such as heart, lung and bone marrow transplantation. The first Australian heart transplant was performed on 23 October 1968 by Harry Windsor on a 57-year-old, Richard Pye. The hospital was also the first Australian hospital to implement a successful cardiac transplant programme. The head of the transplant program was Windsor, but the surgeon who conducted the first successful transplant in 1982 was Victor Chang, a Chinese-Australian cardiothoracic surgeon. One of the first patients to receive a new heart at St Vincents was 14-year-old Fiona Coote who, on 7 April 1984, became Australia's youngest and first female heart transplant recipient at the time. Cardiothoracic surgeons performed the first heart/lung transplant.

The hospital was also one of the first health care facilities in Australia to begin treating AIDS patients when the epidemic reached Sydney in the early 1980s. This was a direct result of the hospital's close geographic position to the predominantly gay areas surrounding nearby Oxford Street and the injecting drug using population of notorious red-light district, Kings Cross. The first patient to be diagnosed with AIDS in Australia was at St Vincent's in October, 1982. As the AIDS epidemic grew in Sydney, the hospital led the way in the compassionate treatment of the sick and the dying, continuing to apply the original values of the Sisters' Mission. This early exposure to the frightening implications of a possible pandemic was responsible for St Vincent's becoming one of the leading centres of immunology research and practice in the world. The hospital was also one of the first health care facilities in Australia to suggest the idea of a needle exchange program, in an effort to stem the spread of the virus among IV drug users in the local community, an idea that was highly controversial at the time, and raised the possibility of criminal charges against doctors and other health care workers who implemented it.[citation needed] The hospital instituted Australia's first needle exchange program in 1986.[7]

The immunology ward of the hospital was highly regarded and strongly supported by the local gay community, who staged numerous charity events to raise money for AIDS care. However, on 24 November 2007, the hospital announced that this ward would be closed because beds allocated for HIV care were not being used due to advances in HIV treatment (namely, more effective anti-retroviral medications), resulting in fewer patients needing to be admitted for HIV/AIDS related conditions. These patients will in future, be admitted onto an oncology ward of the hospital. The decision initially upset sections of the HIV community in Sydney, given that the hospital is regarded as one of the leading HIV health care facilities in Australia, and that the announcement was made only days before World AIDS Day on 1 December. This was soon rectified after hospital management held discussions with leaders of HIV/AIDS groups in Sydney, explaining the reasons for the ward closure, and highlighting an increase in outpatient and ambulatory care services that will be provided in future for these patients. The hospital has since leased the ward to the Royal Australian Navy, whilst their Balmoral Navy Hospital is refurbished, using their own staff, but making use of St Vincent's pathology and radiology services.[citation needed] 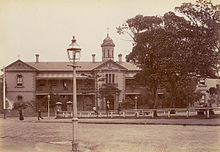 In 1996, St Vincent's joined the Sisters of Charity Health Service, which already encompassed 17 other health care facilities, and which is now, Australia's largest not-for-profit health care provider. The hospital was extensively upgraded in 2001. The hospital is a primary teaching facility, and offers a wide array of clinical experience to students studying medicine and nursing in particular. It was originally affiliated with the University of Sydney from 1923 to 1968, when it changed affiliation to the University of New South Wales. It also has links with University of Technology, Sydney, Australian Catholic University, University of Tasmania and University of Notre Dame Australia, making it one of Australia's leading teaching hospitals.

By 2009, the hospital comprised over 320 medical and surgical beds, and treated more than half a million patients from throughout Sydney and New South Wales each year. The Emergency Department was one of the first in NSW to implement a PECC (Psychiatric Emergency Care Centre), in response to the high number of people with a mental illness residing in the inner suburbs of Sydney, as well as the increasing incidence of people affected by illegal, psychoactive drugs such as heroin, GHB and crystal meth.

In line with the Sister's original mission, the hospital oversees the largest population of homeless people in Australia (many of whom also have a mental illness), concentrated in the neighbouring suburbs of Kings Cross, Surry Hills, and Woolloomooloo. The hospital's catchment area also includes some of Sydney's most affluent suburbs, including Vaucluse, Paddington, Bellevue Hill, Rose Bay, Point Piper and Darling Point.

The Darlinghurst campus comprises St Vincent's Public and Private hospitals, Sacred Heart Hospice, The Garvan Institute of Medical Research, and the Victor Chang Cardiac Research Institute. The hospital has a sister affiliation with The Mater Hospital, Sydney, based in North Sydney. St Vincent's has earned international recognition in the field of medical research, and is at the forefront of developing new therapies for the treatment of many diseases, including cancer, heart disease, HIV/AIDS, Parkinson's disease and Alzheimer's disease, arthritis, asthma and diabetes.[citation needed] Since 2008 the St Vincent's Centre for Applied Medical Research has operated a number of research programs which are engaged in research pertaining to immunology and cell biology, relevant to diseases such as cancer, HIV-Aids and inflammatory disease.[8] This Centre is a collaboration between St Vincent's Hospital and the University of New South Wales.[9]

St Vincent's is a recognised trauma centre, resulting in the majority of major trauma cases that occur in and around the inner city being referred to St Vincents, despite Sydney Hospital being geographically closer to Sydney's central business district. Recently, St Vincent's, along with other hospitals in the Sydney metropolitan area has discussed implementing a 24-hour medical clinic, in order to alleviate the pressure on the Emergency Department caused by increasingly, non-urgent presentations.[10]

St Vincent's has been forced to close beds in the past because of inadequate government funding, despite huge increases in the number of patients admitted in recent years. This resulted in further pressure at times, placed on Sydney's already over-stretched health care system, with subsequent increases in the number of patients on waiting lists for elective surgery, the time spent on those lists awaiting surgery; an increase in the time spent waiting to see a doctor in the Emergency Department, in the time spent awaiting transfer to a ward if admitted, and an increase in the number of days that ambulances need to be turned away because the Emergency Department is closed to all, but life-threatening only (LTO) admissions.[citation needed] The most recent example of this, prior to the closure of the HIV/AIDS ward, was January–March, 2007, when an entire surgical ward was forced to close in order to cut costs, which in turn placed tremendous pressure on the rest of the hospital. Those beds have since been reopened.[citation needed]