Point Piper is a small, affluent harbourside eastern suburb of Sydney, in the state of New South Wales, Australia, 6 kilometres (4 mi) east of the Sydney CBD, in the local government area known as the Municipality of Woollahra.

Point Piper has been historically regarded as Australia's most expensive suburb. In 2011, Wolseley Road was ranked as the ninth-most expensive street in the world, at $38,900 per square metre.[2] 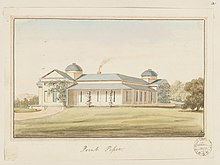 Point Piper was named after Captain John Piper (1773–1851). Piper was a Scottish-born military officer of Cornish parentage, who arrived in the colony in 1792 and built a neo-Palladian mansion on the point, on 190 acres (0.77 km2) of land granted by the governor in 1816. After a review of Piper's performance as head of the Customs Department showed that he had mismanaged funds (although he was not actually accused of being corrupt), Piper attempted to drown himself in Sydney Harbour. He subsequently sold his holdings at Point Piper, Rose Bay, Neutral Bay, and Petersham for £5,000 and moved to the country.

In 1834, Piper's former residence was leased by Colonel John George Nathaniel Gibbes (1787-1873), the newly arrived Collector of Customs for New South Wales and a Crown appointee to the colony's Legislative Council. Colonel Gibbes and his family resided at Point Piper House (also known as "Henrietta Villa" or "Naval Villa") until 1844, when they moved to Wotonga, on Kirribilli Point. Wotonga now forms part of Admiralty House. Point Piper House was eventually torn down in the 1850s and the site was redeveloped.[4]

Point Piper has a number of heritage-listed sites, including:

Point Piper does not have a commercial area, and has few amenities or public facilities. The closest commercial areas are in nearby suburbs such as Rose Bay and Double Bay.

Point Piper, in combination with Darling Point, Edgecliff and Rushcutters Bay, was named as the wealthiest area in Australia, according to information from the Australian Tax Office in 2013.[6]

Point Piper is home to some of the most expensive and exclusive homes in Australia. There are only eleven streets in Point Piper; the main road is Wolseley Road. The price per square metre of real estate in Point Piper is one of the most expensive in the world; property writer Cindy Martin calculated in 2002 that the total value of the properties on the 1 km waterfront section of Wolseley Road was $720 million.[7]

John Symond's mansion on Wingadal Place, reportedly cost over A$70 million to build (excluding land), easily making it Australia's most expensive, privately owned residential home.[8] In 2007, Altona, located in Wunulla Road and Australia's second-most expensive house, was listed for more than $50 million.[9] It was sold in 2013 for a price thought to be more than $50 million, which was a Sydney record.[6]

Craig-y-Mor is a non-waterfront house on Wolseley Road. Australia's second-most expensive residential property, it was sold in 2008 for $32.4 million to the Chinese buyers Zeng Wei and Jiang Mei.[10] It was previously owned by Rene Rivkin, who sold it to businessman Ben Tilley in 2004 for $16.15 million. The house has six bedrooms and a nine-car garage.[11] The property was demolished in 2014 after the decision by the local municipality to deny this was overturned by a state judge.[10]

Wolseley Road is the world's ninth-most expensive residential street at up to $38,000 per square metre.[12]