Warrnambool is a city on the south-western coast of Victoria, Australia. At June 2016, Warrnambool had an estimated urban population of 35,214.[1] Situated on the Princes Highway, Warrnambool marks the western end of the Great Ocean Road and the southern end of the Hopkins Highway.

The word "Warrnambool" originates from the local Aboriginal Australian people, the Koroitgundidj, as the name for a nearby volcanic cone, now known as Tower Hill.[2] It has been interpreted to mean "two swamps" or "ample water".[3]

A popular legend is that the first Europeans to discover Warrnambool were Cristóvão de Mendonça and his crew who surveyed the coastline nearby and were marooned near the site of the present town as early as the 16th century, based on the unverified reports of local whalers' discovery of the wreck of a mahogany ship.[4] The ship's provenance has been variously attributed to France, China, Spain and Portugal. There is no physical evidence to suggest that it ever existed.

The first documented European discovery of Warrnambool occurred under Lieutenant James Grant, a Scottish explorer who sailed the Lady Nelson along the coast in December 1800 and named several features. This exploration was followed by that of the English navigator Matthew Flinders in the Investigator, and the French explorer Nicholas Baudin, who recorded coastal landmarks, in 1802. The area was frequented by whalers early in the 19th century.

The first settlers arrived in the 1840s in the Lady Bay area, which was a natural harbour. The town was surveyed in 1846 and established soon after, the Post Office opening on 1 January 1849.[5]

During the Victorian Gold Rush, Warrnambool became an important port and grew quickly in the 1850s, benefiting from the private ownership of nearby Port Fairy. It was gazetted as a municipality in 1855, and became a borough in 1863. Warrnambool was declared a town in 1883, and a city in 1918. Post Offices opened at Warrnambool South in 1937 (closed 1973), Warrnambool East in 1946, and Warrnambool North in 1947 (closed 1975).[5]

Warrnambool has an oceanic temperate climate. On average, annual rainfall is higher than in other areas of the State.

During the heatwave in southeastern Australia, Warrnambool recorded a maximum temperature of 44.8 °C (112.6 °F) on 7 February 2009. 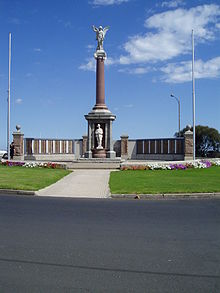 Outside the CBD, the Warrnambool Botanic Gardens feature wide curving paths, rare trees, a lily pond with ducks, a fernery, a band rotunda, and was designed by notable landscape architect, William Guilfoyle.

Eleven suburbs surround the CBD of Warrnambool: North, South, East and West Warrnambool, , Sherwood Park, , Dennington, Woodford, Bushfield and Allansford, though only the four latter are recognised as localities of the city. 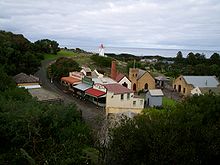 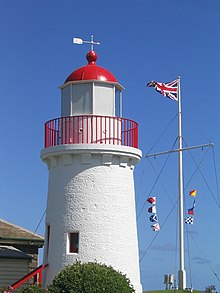 Lighthouse at the Maritime Museum 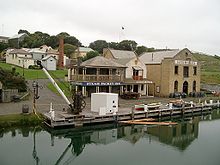 Looking up from the water at the Maritime Museum

During the end of June and the start of July every year, Warrnambool is the home to the children's festival Fun4Kids. It is held next to the Lighthouse Theatre in the CBD.(last ran 2017 cancelled early 2018)

, a festival held in Warrnambool over the first weekend of February annually, is one of south-west Victoria's major community festivals. It incorporates a wide range of entertainment (mostly music) for all ages.

The Flagstaff Hill Maritime Museum is in Warrnambool built on Flagstaff Hill that also holds the original lighthouses and Warrnambool Garrison. Its most prized item in its collection is the Minton peacock salvaged from the Loch Ard. Flagstaff Hill Maritime Village is built around the original lighthouses and now operates as a heritage attraction and museum for the Great Ocean Road. [1] Winner of three Victorian Tourism Awards – Tourist Attraction, it houses an extensive collection of shipwreck and maritime trade artefacts in both a museum and village setting.

The Lady Bay Lighthouse complex is on the Victorian heritage register due to its significance as an example of early colonial development. There has been a flagstaff on top of Flagstaff Hill since 1848, and the current lighthouses were moved to the site in 1878. They still operate as navigation aids for the channel into Warrnambool harbour.

The Warrnambool foreshore is a popular swimming area, and is adjacent to the Lake Pertobe parklands. A number of caravan parks are also located in the area.

Baritone Robert Nicholson recorded the song Back to Warrnambool in 1924.[7]

Warrnambool is the setting and filming location of the 2015 film Oddball, starring Shane Jacobson.[8]

Warrnambool is served by one daily newspaper, The Standard, which is owned by Australian Community Media. The local commercial radio stations are 94.5 3YB and 95.3 Coast FM, both owned by Ace Radio. There is also a community radio channel, 3WAY FM.

Warrnambool is home to the Grand Annual Sprintcar Classic, a race which attracts Australian and international drivers on the Australia Day long weekend, especially because of its position in the motorsport calendar..

The city is also the finishing point of the Melbourne to Warrnambool Classic cycle race. It is the longest one-day bicycle endurance race in the world, held every October since 1895 to be the world's second oldest bike race.[9][10]

The Warrnambool Greyhound Racing Club also holds regular meetings on most Thursdays. The Greyhound version of the Warrnambool Cup is held on the first Wednesday of May. The club also holds the Seaside Festival over the Christmas and New Year period providing great entertainment and value for money for both kids and kids at heart.[12] The club is located centrally in the Warrnambool Showgrounds Precinct on Koroit Street.

Warrnambool is home to the , a 410 metres (450 yd) dirt track oval speedway located approximately 5 km east of the town. As well as hosting various Victorian state championships, Premier Speedway has hosted Australian championships for Sprintcars, Super Sedans and Street Stocks. Premier Speedway has also regularly hosted rounds of the World Series Sprintcars, being one of only five tracks to host a round of every series run since its inception in 1987. Since 1973 the speedway has been home to the Grand Annual Sprintcar Classic, the biggest single sprint car racing meeting in Australia, and on occasion has outdrawn the famed Knoxville Nationals in the United States for number of competitors entered, as better known drivers enter both races. The Classic is traditionally run the weekend before the national title meeting. The speedway has hosted the Classic / Australian Championship double on six occasions - 1979, 1986, 1994, 1999, 2003 and 2011, with Sydney's 10 time Australian Champion the only driver to win the double at Warrnambool in 1986 when he won his 6th Classic and a week later his 7th national title. 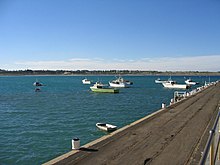 Warrnambool attracts many visitors each year, and is a comprehensive regional service centre. The town's tourism benefits from the views from the Great Ocean Road, and its nearby beaches, some of which are used for surfing. In the winter months, Southern Right whales can be seen in the waters near the city at the Logan's Beach nursery, and boats make whale-watching tours. Visitor levels are usually higher during the winter school holidays due to Australia's Biggest Children's Festival, the Fun4Kids Festival.(now cancelled from 2018)[citation needed]

The mainstay of the economy is agriculture and its support industry – particularly dairy farming and associated milk processing. Other major industries and services include retail, education, health, meat processing, clothing manufacture and construction. The Fletcher Jones and Staff Pty Ltd clothing factory opened in 1948 and was closed in 2005.[16]

15.9% of Warrnambool residents were born outside Australia, which is significantly less than the Australian average of 33.3%.[17] 98.7% speak English at home.[citation needed] 1.6% are Indigenous.[17]

The Local Government is the Warrnambool City Council.

At the federal level, Warrnambool is the largest town in the division of Wannon, which has been a safe Liberal seat since 1955. However, Warrnambool booths typically receive a much stronger Labor vote than the rural areas that surround it. The seat was held by former Prime Minister Malcolm Fraser for 28 years, before being held by former Speaker of the lower house David Hawker for 27 years.

There are many primary schools in Warrnambool, including:

In addition, there is:

The city's only university facilities are at the Deakin University Warrnambool campus. The South West Institute of TAFE and SEAL both provide vocational education. 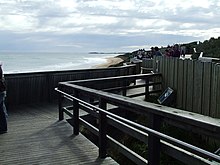 Logan's Beach on the eastern side of the city is recognised as a nursery site for the southern right whale Eubalaena australis, and many tourists have been attracted to opportunities for land-based observations. Most years one, two or three adult female whales arrive between late May and August, giving birth within days of their arrival. The young whale calf is then reared at the site, usually departing with its parent by mid to late September. Besides the southern right whale, the coastline is also visited by Australian fur seals, little penguins and common dolphins. During the winter and early spring albatross cruise along the coastline and can be sighted from Thunder Point, a popular coastal lookout in the town.

Middle Island has a colony of little penguins (Eudyptula minor). Fox predation reduced numbers significantly. In 2005 only four penguins were remaining in the colony. Warrnambool City Council introduced a world first program using Maremma dogs to guard the penguins. This program has supported the re-establishment of a colony of over one-hundred penguins in 2009.[22][23][24] By 2015 the population had reached almost two-hundred.[25] The film Oddball tells the story of the dogs saving the penguins.

Warrnambool is situated on the Princes Highway between Port Fairy to the west and Terang to the east as well as at the south-western terminus of the Hopkins Highway. The Great Ocean Road terminates 13 km east of Warrnambool, near Allansford.

Local buses under the brand cover Warrnambool's city and suburbs and extend to the nearby towns of Port Fairy and Koroit. V/Line coaches connect Warrnambool with Mount Gambier, Ballarat, Ararat, Casterton and the Great Ocean Road to Geelong.

There are two hospitals in Warrnambool: South West Healthcare, and St John of God Healthcare.