Queanbeyan /ˈkwiːnbiən/ is a city in south-eastern region of the Australian state of New South Wales, located adjacent to the Australian Capital Territory in the Southern Tablelands region. Located on the Queanbeyan River, the city is the council seat of the Queanbeyan-Palerang Regional Council. At the 2016 census, the Queanbeyan part of the Canberra–Queanbeyan built-up area had a population of 36,348.[1]

Queanbeyan's economy is based on light construction, manufacturing, service, retail and agriculture. Canberra, Australia's capital, is located just 15 kilometres (9 miles) to the west, and Queanbeyan has to some extent become a commuter town. The word Queanbeyan is the anglicised form of Quinbean, an Aboriginal word meaning "clear waters".[citation needed]

Queanbeyan was officially proclaimed a township in 1838 when the population was about 50. The local parish was also known by that name and later still the member for the electorate of Queanbeyan held a seat in the legislative assembly of the colony of NSW. On 28 November 1837 the Colonial Secretary announced the appointment of Captain Alured Tasker Faunce as resident police magistrate at Queanbeyan. His homestead, called Dodsworth, was situated on the banks of the Queanbeyan river opposite the town.[2]

Traces of gold were discovered in 1851 and lead and silver mines also flourished briefly. Settlers were harassed by bushrangers, of which James Shaw, William Millet, and John Rueben,[3] John Tennant, Jacky Jacky, Frank Gardiner and Ben Hall were some of the more notorious. In 1836, a Post Office was established.[4]

The Commercial Banking Company of Sydney Limited (CBC, now part of the National Australia Bank) opened in Queanbeyan on 19 September 1859. The Bank of New South Wales began service in Queanbeyan in 1878. The Golden Age (now The Queanbeyan Age) was Queanbeyan's first newspaper and was founded in 1860 by John Gale. In 1880 the residence of John James Wright, the first mayor of Queanbeyan, was constructed along the edge of the Queanbeyan River. In 1982 that building became the Queanbeyan Art Centre.

The Salvation Army claimed an outpost in Queanbeyan in 1884.

Queanbeyan, an increasingly successful primary producing district, was proclaimed a Municipality in February 1885 incorporating an area of 5,700 acres (23 km2). The railway reached Queanbeyan railway station in 1887 and it became the junction for the lines going to Canberra and Bombala. The town is served by the thrice-daily NSW TrainLink Xplorer service between Canberra and Sydney.

Bridge near the centre of town over the river 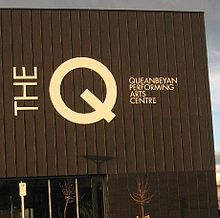 William James Farrer, the wheat experimentalist, established Queanbeyan's reputation as an agricultural district with his famous "Federation" rust-free strain, developed on his property "Lambrigg" at Tharwa. Farrer's work was only slowly recognised elsewhere in Australia, but local farmers supported him, particularly in his development of "Blount's Lambrigg", another strain which in 1889 gave hope to farmers after the disastrous season of 1887 when crops had failed after heavy Christmas rains.

At the height of its rural prosperity Queanbeyan boasted sixteen public houses and six flourmills powered by wind, water, horse and steam. The Royal Hotel on Monaro Street opened in 1926. In Canberra alcohol was prohibited from 1911, at the time of the territory's foundation, until 1928, when Federal Parliament had relocated from Melbourne. In that period many of the capital's residents crossed the border to drink at one of Queanbeyan's hotels.

Queanbeyan was granted city status on 7 July 1972. On 21 July 1975 the Queen's Bridge was opened. This bridge took pressure off the existing bridge in linking Monaro Street directly to the east. From 1982 to 1989, the Canberra Raiders rugby league team played their home games in Queanbeyan, at Seiffert Oval.

Since December 2008, the Australian Defence Forces's HQ Joint Operations Command has been based adjacent to the Kowen district of the Australian Capital Territory, just south of the Kings Highway, about 15 km east of Queanbeyan, and 15 km south of Bungendore, New South Wales.

Queanbeyan has a number of heritage-listed sites, including:

Queanbeyan has two light manufacturing/industrial precincts centred on Gilmore Road and Yass Road. The Queanbeyan Solar Farm with 720 solar panels has a generating capacity of 50 kW, and is located in the Yass Road area. Queanbeyan has a large and significant retail market in roses, which are sourced from the local district.

Air services are available at the nearby (10 km) Canberra airport.

Queanbeyan has a number of sports teams that play in local sports competitions.

The Queanbeyan Show, which started over 100 years ago, is held annually at the Queanbeyan Showgrounds in November over two days. There are equestrian events, a sideshow alley, art and craft displays, cooking exhibits, an agricultural pavilion and livestock exhibitions. Also held is a Showgirl, Miss Junior Showgirl and Tiny Tots competition. Seiffert Oval is one of the largest stadia in the region.

In February, the play host to the annual "Convoy for Kids" to aid cancer research. The event is widely supported by community groups, regional businesses and the emergency services. The event attracts hundreds of commercial vehicles, trucks, prime movers and bushfire brigade vehicles. The highlight of the afternoon is the sounding of horns, which can be heard for miles around. Other regular events throughout the year include the Rodeo in March, Field Days, and a camping and off-road vehicle show. Queanbeyan Basketball Stadium is based on Southbar Road near a and is the main venue used for indoor sports like basketball and netball.

On 3 December, Queanbeyan hosts an annual Festival of Ability as part of the Don't DIS my ABILITY campaign, celebrating International Day of Persons with Disabilities. The event attracts more than 3,500 people and is a community celebration, acknowledging the strengths, skills and achievements of people with a disability in the Queanbeyan region.

Canberra's Harmonie German Club holds an Oktoberfest over a three-day period every year in October.[20] In 2017 the event moved over the border to the Queanbeyan Showgrounds on 27–29 October.[21][22]

At a state level, Queanbeyan is the major population centre in the seat of Monaro, and is currently held by John Barilaro of The Nationals. 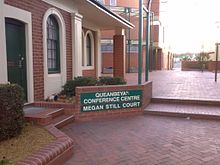 Queanbeyan has a subtropical highland climate (Cfb) with warm to hot summers and cold winters, similar to Canberra.