There are eighteen suburbs in Palmerston, ten of which are close to the Palmerston city centre. Palmerston is mostly residential with two light industrial areas in the north of the city.

Palmerston is approximately a 20 minute drive (20km) away from the Darwin city centre, 20 minutes (18km) from Darwin's Northern suburbs and 13-20 minutes (10km) from Howard Springs and the rural area.[2]

The harbour at Palmerston, later Darwin

Palmerston was the name chosen in 1864[3] for the capital of the Northern Territory by the South Australian Government, which was then responsible for its administration, in recognition of Lord Palmerston, who became Prime Minister of the United Kingdom of Great Britain and Ireland in 1855.[4] The first site, as chosen by Boyle Travers Finniss at Escape Cliffs[5] near the mouth of the Adelaide River, on the coast of Adam Bay on the western side of the Cape Hotham peninsula in 1864,[6] was abandoned in 1867 and a second laid out by Surveyor-General George Goyder near Port Darwin in 1869.[7] The town was officially renamed Darwin in April 1911[8] after responsibility for the Northern Territory passed to the Commonwealth of Australia and was officially gazetted as the City of Darwin in 1959.[9]

The land for a new satellite city of Darwin was acquired in 1971 by the Australian Government after concerns of under-supply of residential land in Darwin. The site was selected as the land was adjacent to existing transportation corridors. The decision to proceed with the development was made in 1980 and for the third time, the name of Palmerston was selected for the new city. Planning and development was managed by the Palmerston Development Authority.[10]

Development of Palmerston began during the early 1980s. Suburbs of Palmerston were built in stages. The first suburbs built were Gray and Driver, followed by Moulden, then Woodroffe and Marlow Lagoon. The urban area continued to grow throughout the 1990s, with the new suburbs of Bakewell, Rosebery and Durack. The population growth of Palmerston continues to be the highest in the Northern Territory.

In 1995/1996 the construction commenced on 5 new Palmerston suburbs, Rosebery, Bakewell, Durack, Gunn, and Farrar. These were developed in stages. In 2000 the Palmerston Town Council sought and obtained a change in the name of the municipality to City of Palmerston.[12]

The major landmark in Palmerston is the Power and Water Corporation's water storage tank, which supplies the city with fresh potable water. Formerly, the city had a large escarpment in the heart of the city, with extensive walking paths and a small creek, but the area has since been converted into an open grassy area; the community space known as Goyder Square.

Palmerston is located between the outer industrial areas of Darwin and the rural areas of Howard Springs, 21km (13 mi) South–East of the NT capital Darwin, and is situated in the local government area of the City of Palmerston.

The urban area of Palmerston extends from the Stuart Highway in the North and East and the East Arm inlet to the West and South.

Looking over the suburb of Farrar

The City of Palmerston initially consisted of the Palmerston Town (CBD), Driver and Gray. These were followed by Moulden and Woodroffe after development in those areas commenced in 1983. Also included in the City of Palmerston are the semi-rural suburb of Marlow Lagoon, the suburb of Archer and the industrial zones of Yarrawonga and Pinelands. Further developments have occurred leading to the creation of the suburbs of Rosebery, Bakewell, Gunn, Durack and more recently Farrar, Bellamack, Johnston, Zuccoli and Mitchell. The newer suburbs are located on the south-east side of the existing city.

Palmerston has a tropical climate like Darwin with distinct wet and dry seasons. The dry season runs from May to September. In the coolest months of June and July, daily temperature range is 19 to 35 °C. The Wet season is associated with tropical cyclones and monsoon rains. The majority of rainfall occurs between December and March when thunderstorms are common and humidity is regularly over 80 per cent.

Palmerston is one of the fastest growing cities in Australia. Palmerston recorded the fastest increase of population of all the local government areas in the Northern Territory. Palmerston increased by 1,300 people growing by 5 per cent.[when?] The fastest growth occurred within Palmerston which includes the suburbs of Farrar, Rosebery, Marlow Lagoon and Gunn and Palmerston City.[17] 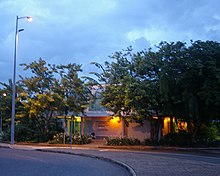 In territory politics, Palmerston is split between five Legislative Assembly districts. The districts of Blain, Brennan and Drysdale are entirely within the city. The district of Spillett is located mostly within Palmerston, but spills into eastern Darwin. The mostly rural district of Nelson spills into the city. Historically, Palmerston has been a bastion of conservatism, with Country Liberal Party candidates usually winning by wide margins. Labor never came remotely close to winning seats in Palmerston until 2005, when that year's massive Labor landslide saw Labor take Brennan and Drysdale off the CLP. However, those seats reverted to form in the 2008 election.

At the 2016 general election, however, Labor took Brennan and Drysdale off the CLP, while Blain fell to independent Terry Mills, a former CLP Chief Minister. Currently, Palmerston is represented by two Labor members, two independents, and one CLP member.

Palmerston has around 19,800 people in the labour force. In March 2017, the unemployment rate in the city was 3.98 per cent which was above the Northern Territory average of 3.5 per cent.[20] 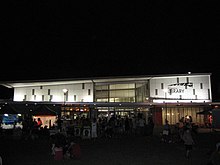 Palmerston library by night. The Palmerston markets can be seen in the foreground.

For further information see Schools in the Northern Territory.

The Charles Darwin University Palmerston campus is located in the suburb of Durack. The campus hosts the School of Tourism and Hospitality as well as expanding into a mini-School of Conservation and Land Management. There are over 4,318 students enrolled in tertiary and further education courses.[26] In 2008, 247 of Palmerston residents were enrolled in higher education at Charles Darwin University and 4,071 students enrolled in vocational education and training.[27]

Palmerston is home to the Palmerston Football Club (known as the "Magpies") Northern Territory Football League (AFL) and is based out of the .[28] Palmerston has a strong presence in Australian rules football. The Archer Sporting Complex has an Australian rules football field, a senior Softball diamond and senior Baseball diamond. There are also a number of sporting clubs located at the complex. The complex home to the, , and the Softball team.

The Palmerston Raiders Rugby League team are based at Goodline Park in the Southern suburbs.[30]

Palmerston has one association football team, the which plays in the Northern Zone League.

The city has a skate park located on University Avenue that is funded by the Palmerston City Council.

There is also a local near-Olympic size swimming pool with a gymnasium.

There is also a boat ramp allowing access to the Elizabeth River for small trail-able marine craft. Persons utilising the area are cautioned that both Box jellyfish and crocodiles are present in the river.

A branch of the YWCA is located at the CBD.

The Palmerston Scouts are based at MacKillop Catholic College.[31]

Palmerston has one major tennis centre. Opened in January 2012 it includes 7 courts, BBQ area and canteen. The centre offers group coaching and competition opportunities for people of all ages.

Most large statewide and interstate newspapers are also available from local retailers, albeit with a delay in arrival.

The city has a network of bicycle paths, most of which are lit for night-time usage.

There is also a public bus service operated by Darwinbus that offers transportation around Palmerston, into Darwin City and out to Darwin's Northern Suburbs.

The Darwin City Airport is the closest air terminal. The airport is located in the Darwin suburb of Marrara, approximately 20 minutes away from Palmerston.

Darwin-based taxis are also available in Palmerston, as well as a number of local and Darwin-based mini-bus operators. 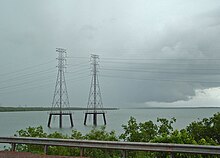 Water storage, supply and Power for Palmerston is managed by Power and Water Corporation, which is owned by the Government of the Northern Territory. The corporation is also responsible for management of sewerage and the major water catchments in the region. Water is mainly stored in the largest dam, The Darwin River Dam which holds up to 90% of Palmerston's water supply. For many years, Palmerston principal water supply came from .

Palmerston and its suburbs are powered by the Channel Island Power Station, the largest power plant in the Northern Territory.

Many of Palmerston's health needs are serviced by the which includes the Palmerston Community Care Centre, public dental service, , Medical Specialists Clinic and the Farrar Medical Centre. There are seven general practices in the Palmerston health region, four of which provide after-hours services.[32]