The NEM began operation on 13 December 1998 and operations currently includes Queensland, New South Wales, Australian Capital Territory, Victoria, Tasmania and South Australia.[1] Western Australia and the Northern Territory are not connected to the NEM.[1] The NEM comprises five regions, with the ACT being in the NSW region. Tasmania joined the NEM in May 2005 and became fully operational on 29 April 2006 when the Basslink interconnector was fully activated.[2] The Snowy region was abolished as a region on 1 July 2008 and the components split between New South Wales and Victoria.[3] The Northern Territory has adopted parts of the National Electricity Law, with the Australian Energy Market Commission becoming the rule maker for the Territory for parts of the National Electricity Rules from 1 July 2016.[4] Western Australia is also considering adopting parts of the NER.[4]

The NEM operates one of the world’s longest interconnected power systems between Port Douglas, Queensland and Port Lincoln, South Australia, with an end-to-end distance of more than 5000 kilometres, and 40,000 kilometres of high voltage transmissions line.[5] During the 2017-18 financial year, 203 TWh of electricity with a market value of AU$17 billion was traded through the NEM, serving 9.7 million end-use consumers[5]. Approximately 40% of NEM generation is consumed in New South Wales, while Victoria and Queensland consume approximately 25% each.

Operation of the physical market

Scheduled generators submit offers every five minutes of every day[citation needed]. From all offers submitted, AEMO’s systems determine the generators required to produce electricity based on the principle of meeting prevailing demand in the most cost-efficient way (see also Economic dispatch)[citation needed]. AEMO then dispatches these generators into production by sending automatic generation control (AGC) target signals to each generating unit[citation needed].

A dispatch price is determined every five minutes and is abbreviated as a DI. Six dispatch prices are averaged every half-hour to determine the spot price for each trading interval, and is abbreviated as a TI. There are 5 trading regions for each of the regions of the NEM[citation needed]. AEMO uses the spot price as the basis for the settlement of financial transactions for all energy traded in the NEM[citation needed].

There is a maximum price that generators can bid in at. Under the Rules, the AEMC adjusts this maximum spot price MPC (market price cap) by movements in the consumer price index by 28 February each year for the rate to commence on 1 July. For the 2020-2021 financial year the MPC is $15,000/MWh. There is a further limit on the price called the Cumulative Price Threshold. The Cumulative Price Threshold is the sum of value of the all the TI's for the previous 7 days, calculated on a rolling basis. When this exceeds $224,600, AEMO caps the bids to a nominated value, currently $300/MWh. Whilst the price is capped in this manner, it is known as an Administered Price period. The process continues until the rolling average drop to allow normal trading without impinging the threshold to rapidly again.

The Rules also set a minimum spot price of minus $1,000 per MWh[7] which is the market floor price. This negative market floor price allows generators to pay to stay online when the cost of staying online is lower than the cost of shutting down and re-starting their plants. For a renewable generator, staying online may also cost less than what generators receive from support mechanisms like the Renewable Energy Target scheme, plus their own costs.[8] 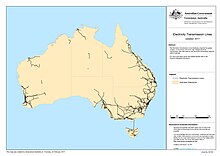 TNSPs participate in the Australian Energy Regulator's (AER) revenue proposal process, where submissions of the TNSPs, the AER and other interested parties are used to set the maximum allowable revenue (MAR) for the TNSPs for a five-year period.

The crossborder interconnectors are:[9]

NEM reliability standards are established by the Australian Energy Market Commission (AEMC) Reliability Panel.[10] These standards currently require that unserved energy per year for each region must not exceed 0.002 percent of the total energy consumed in that region that year.[10]

The reliability safety net provisions of the National Electricity Rules provide that AEMO must procure sufficient reserve to ensure that the reliability of supply meets the reliability standard.[10] When reserves acquired by AEMO are dispatched they are bid in at the MPC thus setting the spot price at the maximum level.[10]

In addition to physical spot trading through the NEM, there is a separate financial trading market for electricity[citation needed].

There are numerous variations on the standard hedging contract available in the market, often containing complicated financial arrangements, for example one way option contracts, cap and collar contracts[citation needed].

The Sydney Futures Exchange lists eight standardised futures products based on Base Load and Peak-Period energy bought and sold over a calendar quarter in the NEM in New South Wales, Victoria, South Australia and Queensland.[12]

AEMO was established by the Council of Australian Governments (COAG) and developed under the guidance of the Ministerial Council on Energy (MCE)[citation needed]. It is run by a skills-based board of nine non-Executive Directors and the Chief Executive Officer[citation needed].

A generating unit generally non-intermittent units above 30MW. They are required to submit price/quantity bids specifying their generation intentions, and must comply with dispatch instructions from AEMO[20].

A person who is registered by AEMO as a Market Generator, Market Customer or Market Network Service Provider under Chapter 2 of the NER[citation needed].

The term 'gentailer' or gen-tailer is a portmanteau word combining the terms generator and retailer, i.e. gen-tailer[citation needed]. This is a reference to the vertical integration of companies operating in the NEM, where generators own a retail arm[citation needed]. Four companies in the Australian NEM commonly described as gentailers are EnergyAustralia, AGL Energy, Origin Energy and Snowy Hydro (Lumo and Red Energy being retailer brands). Additionally, ERM Power is a generator as well as small business retailer.

It has been argued that the reforms have delivered considerable economic benefits[citation needed]. A government review (December 2006) stated that the reforms have underpinned significant levels of investment in energy supply (approximately $7 billion in electricity generation and $4.4 billion in electricity transmission), improved productivity (particularly capital utilisation) and delivered internationally competitive electricity prices for Australian industry and households.[21] In terms of the climate change impacts of the reforms, experts have concluded that the outcome is increased emissions with respect to business as usual scenarios[citation needed]. This is due to the lower cost of coal fired generation compared to other generators, reduced emphasis on energy efficiency from lower prices, the failure to price greenhouse gas emissions, combined with market design and regulation that favours incumbents.[22]

On 16 October 2017, the ACCC published a preliminary report into the electricity market[23] highlighting significant concerns about the operation of the National Electricity Market, which is leading to serious problems with affordability for consumers and businesses. ACCC Chairman Rod Sims said:

“It’s no great secret that Australia has an electricity affordability problem. What’s clear from our report is that price increases over the past ten years are putting Australian businesses and consumers under unacceptable pressure. Consumers have been faced with increasing pressures to their household budgets as electricity prices have skyrocketed in recent years. Residential prices have increased by 63 per cent on top of inflation since 2007-08.”

The ACCC estimates that in 2016-17, Queenslanders will be paying the most for their electricity, followed by South Australians and people living in New South Wales. Victorians will have the lowest electricity bills. On average across the NEM, a 2015-16 residential bill was $1,524 (excluding GST), made up of network costs (48%), wholesale costs (22%), environmental costs (7%), retail and other costs (16%) and retail margins (8%). The ACCC attributed the main reason for electricity price increases to higher network costs for all states other than South Australia, where generation costs represented the highest increase. "The wholesale (generation) market is highly concentrated and this is likely to be contributing to higher wholesale electricity prices." The ACCC accused the network operators of "over-investing" in poles and wires and gaming rules around revenue.[24] The ‘big three’ vertically integrated gentailers, AGL, Origin, and EnergyAustralia, continue to hold large retail market shares in most regions, and control in excess of 60% of generation capacity in NSW, South Australia, and Victoria making it difficult for smaller retailers to compete. Retail margins increased significantly in NSW, but decreased in others.[23]

In the September 2017 quarter, the price of electricity increased nationally by 8.9%.[25]