Location mentioned in Genesis as place where Noah's Ark came to rest after the great flood
This article is about the Scriptural reference. For the peak identified with the Biblical account since the middle ages, see Mount Ararat. 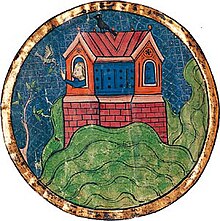 Depiction of Noah's ark landing on the "mountains of Ararat", from the North French Hebrew Miscellany (13th century)

In the Book of Genesis, the mountains of Ararat (Biblical Hebrew הָרֵי אֲרָרָט, Tiberian hārēy Ǎrārāṭ, Septuagint: τὰ ὄρη τὰ Ἀραράτ)[citation needed] is the term used to designate the region in which Noah's Ark comes to rest after the Great Flood.[1] It corresponds to ancient Assyrian Urartu, an exonym for the Kingdom of Van.[citation needed]

Since the middle ages the "mountains of Ararat" began to be identified with a mountain in Armenia known as Masis or Ağrı Dağı; the mountain became known as Mount Ararat.[2][3]

Citing historians Berossus, , Mnaseas, and Nicolaus of Damascus, Josephus writes in his Antiquities of the Jews that "[t]he ark rested on the top of a certain mountain in Armenia, . . . over Minyas, called Baris."[4]

Likewise, in the Latin Vulgate, Jerome translates Genesis 8:4 to read: "requievitque arca . . . super montes Armeniae" ("and the ark rested . . . on the mountains of Armenia");[5] though in the Nova Vulgata as promulgated after the Second Vatican Council, the toponym is amended to "montes Ararat" ("mountains of Ararat").[6]

By contrast, early Syrian and Eastern tradition placed the ark on Mount Judi in what is today Şırnak Province, Southeastern Anatolia Region,[7] an association that had faded by the Middle Ages and is now mostly confined to Quranic tradition.[citation needed]

The Book of Jubilees specifies that the ark came to rest on the peak of , a mountain of Ararat.[8]

Sir Walter Raleigh devotes several chapters of his Historie of the World (1614) to an argument that in ancient times the mountains of Ararat were understood to include not only those of Armenia, but also all of the taller mountain ranges extending into Asia. He maintains that since Armenia is not actually located east of Shinar,[notes 1] the ark must have landed somewhere in the Orient.[citation needed]