Hervey Bay (/ˈhɑːrvi/) is a city in the Fraser Coast Region of Queensland, Australia.[3] The city is situated approximately 290 kilometres (180 mi) or 3½ hours' highway drive north of the state capital, Brisbane. It is located on the bay of the same name open to the Coral Sea between the Queensland mainland and nearby Fraser Island.[4] The local economy relies on tourism which is based primarily around whale watching in Platypus Bay to the north, ferry access to Fraser Island, accessible recreational fishing and boating and the natural north facing, calm beaches with wide undeveloped foreshore zones. In October 2019, Hervey Bay was named the First Whale Heritage Site in the world by the World Cetacean Alliance, for its commitment to and practices of sustainable whale and dolphin watching.

Butchulla (also known as Batjala, Badtjala, Badjela and Badjala) is the language of the Fraser Coast region, including K’gari (Fraser Island). Butchulla language region includes the landscape within the local government boundaries of the Fraser Coast Regional Council, particularly the towns of Maryborough and Hervey Bay extending south towards Noosa and north to Caboolture.[5]

The indigenous Batjala people including the Kabi Kabi are the traditional residents of Hervey Bay. (Batjala means Bat-No and Jala-tongu. This would mean they were shy people who did not communicate with people outside of their family group.) The first recorded European sighting of Hervey Bay was made by James Cook while carrying out his running survey of the east coast of Australia, on 22 May 1770. By noon Cook's ship was in a position a little over half-way across the opening of Hervey Bay heading for Bundaberg. When Cook first discovered Hervey Bay, he did not realize that Fraser Island was separated from mainland Australia; Cook did not travel far enough south due to the shallow depths of the waters in the Bay.[6] Cook named the bay "Hervey's Bay" after Augustus John Hervey (1724–1779), later Third Earl of Bristol, a naval officer who became a Lord of the Admiralty the year Endeavour returned.[7]

Until around the mid-1980s the area was serviced by a rail link from the main North Coast line that diverted from Aldershot and went through Takura, Walligan, Nikenbah then on to Pialba and Urangan. The line was a major freight point for the Port of Maryborough and for the sugar cane industry until road transport assumed the role.

In 1984, Hervey Bay was officially known as the "City of Hervey Bay". It was known as a city because of its large growth in business, population, tourism and industry. Although it was now being known as a city, it still remained a small seaside village to most of the local residents.

Hervey Bay has a number of heritage-listed sites. Fraser Island is listed on the World Heritage List.[9] The Woody Island Lighthouses are listed on the Queensland Heritage Register.[10] 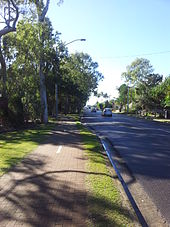 The Esplanade, leading to Urangan from Hervey Bay 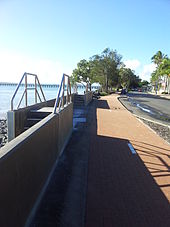 Urangan Seawall and Urangan Pier in the background

On the beach Hervey Bay looking towards Torquay

Hervey Bay is situated approximately 3½ hours' drive north of Brisbane, via the Bruce Highway and 30 minutes' drive north-east of Maryborough. The city is also served by the high-speed Tilt Train, which has connections from Maryborough West or nearby Howard. The city is served by the Hervey Bay Airport, with direct flights from Brisbane (QantasLink) and Sydney (Virgin Australia). The City of Hervey Bay (now the Fraser Coast Region) has released an airport master plan which includes future provision of a taxiway parallel to the main runway, additional car parking and a larger terminal. The city is also served by passenger ferry to Fraser Island, as well as both scheduled and unscheduled vehicular ferries.

Despite Hervey Bay's growing popularity, no plans have been made for a new railway line to the city. The previous passenger and freight line branched off the North Coast main line at Colton, just north of Maryborough. Trains stopped at many stations along the line, but the main stations were Pialba and Urangan. The railway then extended along the Urangan Pier. The line carried out pineapples and local goods from the city. The line was closed in 1993. The tracks from Nikenbah to Urangan were removed and the Pialba – Urangan line was converted into a mobility corridor.[11] Traces of the railway line are still visible in Urangan. There are two semi-removed crossings (Everything but the tracks was removed) near the end of Pier Street and the track's ballast is still slightly visible from where the mobility corridor ends.

The Electoral district of Hervey Bay has Queensland's second highest share of residents aged over 60.[13]

Hervey Bay is represented in the Parliament of Queensland by LNP member Ted Sorensen, who defeated Labor's Andrew McNamara in the 2009 Queensland state elections, and in the Commonwealth Parliament by the Nationals member for Hinkler, Keith Pitt.[14]

Tropical cyclones are a threat at times with Cyclone Hamish threatening in 2009 as a Category 5. The land mass of Fraser Island significantly affects the pattern of weather in Hervey Bay and protects the immediate marine environment from open ocean storm effects. Cyclone Oswald in 2013 caused significant damage in the area, mainly as a result of tornadoes spawned by the system. The average rainfall for the year is around 1,100 millimetres (43 in). December to March is the main rainy period, with a secondary peak in May and June. The months of April and from July to November are generally dry and sunny. 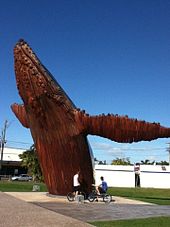 Hervey Bay began as a dispersed community spread over numerous small, seaside villages. As the area grew, these communities amalgamated and became suburbs of the new city. The current city includes the following settlements:[citation needed]

Hervey Bay also has two Higher Education institutes, a campus of the University of the Sunshine Coast and the .[32][33] and a State Government Special School.

Hervey Bay and the Fraser Coast region's largest shopping centre is Stockland Hervey Bay.[35] It is a regional shopping center located in the suburb of Urraween. Stockland Acquired the centre in April 2011, at the time it had a floor area of 15,600 square meters, and 48 stores. In 2013 Stockland begun construction of a $115 million redevelopment that would double the floor area to over 35,000 square metres.[35] The development would include an additional 70 specialty stores and a 500-seat food court, taking the total number of stores to 110.[36]

Hervey Bay has an active sporting community with the geography and climate encouraging a diverse range of activities. The natural foreshore area of Hervey Bay has a 14-kilometre (8.7 mi) long bike and pedestrian path that visibly integrates recreational fitness into the environment and community. Competition sports are generally regional and played against nearby cities, Bundaberg, Maryborough and Gympie. The calm waters and gently sloped beaches make recreational and competitive water sports popular and accessible. These include sailing, kite boarding, water skiing, wake boarding, kayaking, out-rigging, snorkelling, scuba diving and ocean swimming. The Hervey Bay Triathlon started in 1988 and has been raced annually since. The local rugby league team, Hervey Bay Seagulls, are the cornerstone of rugby league in the Hervey Bay area.

According to the Australian Sister Cities Association, Hervey Bay has two sister cities;