Hamilton is a large town in south-western Victoria, Australia, at the intersection of the Glenelg Highway and the Henty Highway. The Hamilton Highway connects it to Geelong.

Hamilton is in the federal Division of Wannon, and is in the Southern Grampians local government area.

Hamilton claims to be the "Wool Capital of the World", based on its strong historical links to sheep grazing which continue today.[2] The town uses the tagline "Greater Hamilton: one place, many possibilities".

Hamilton was built near the border of three traditional indigenous tribal territories: the Gunditjmara land that stretches south to the coast, the Tjapwurong land to the north east and the Bunganditj territory to the west. People who lived in these areas tended to be settled rather than nomadic. The region is fertile and well-watered, leading to an abundance of wildlife, and no need to travel far for food. Physical remains such as the weirs and fish traps found in Lake Condah to the south of Hamilton, as well as accounts of early white settlers support local indigenous oral histories of well-established settlements in the area.

On 12 September 1836, the explorer, Major Thomas Mitchell was the first European to travel through the area where Hamilton later developed. His reports of the fertility and abundance of ‘Australia Felix’ (as he called this region of Western Victoria) encouraged pastoralists to move to the area and establish large sheep runs. By 1839 there were a number of squatters in the area including the Wedge family whose property ‘The Grange' was located within the present town site.

There was significant conflict between the Europeans and Aboriginal tribes at the time, over such things as resource and claims over land.

During the early 1840s brothers Henry and Charles Wedge, local squatters and servants participated in at least three revenge attacks for the killing of Patrick Codd (an employee on The Grange) and the stealing of sheep from their sheep run. The reprisals resulting in many deaths of Jardwadjali or Djab wurrung Aboriginals. The Grange's home station hut and store was infamously protected by a small mounted swivel gun.[3]

The "frequent collisions" compelling squatters of the area to request protection from the Government.[4]

In 1843 temporary protection came from 17 troopers, including Captain Henry Dana and the native police, Foster Fyans, James Blair (police magistrate from Portland). Around this time a police magistrate was appointed for The Grange by Governor Charles Latrobe to "check the collision between the natives and the settles".[5][6]

Birth of the town

The proximity of The Grange to other properties and to important tracks between Portland and New South Wales led to the gradual emergence of a small town. This included an inn, blacksmith, a small store and some shanties and businesses nearby. The site was a small social centre for surrounding pastoral properties, with horse races being held along the Grange Burn flat. A Post Office opened on 1 July 1844 (Hamilton from 1 January 1854).[7]

The desire for a school prompted a town survey that commenced in 1849. The township of Hamilton was formally declared in 1851. The town was named in the following way as quoted by the book, "Dundas Shire Centenary 1863-1963", page 58. Quote: "In 1840, owing to police difficulties in controlling public houses on, or not on the imaginary boundary line, Henry Wade was sent from Sydney on a special mission to mark out the boundary. He completed the survey as far as Serviceton by the spring of 1847, and was then appointed District Surveyor and in 1850, laid out a township for the Grange, which he named Hamilton. It was then the prerogative of the surveyor to christen his lay-out. Wade and his family had made close friends of the Hamiltons and Gibsons of Bringalbert, there being intermarriages later." Unquote.

The railway reached the town in 1877, along with the local railway station which later became a hub of several branch lines.[8]

Hamilton contains a number of heritage-listed sites, including:

Sheep grazing and agriculture are the primary industries in the surrounding shire, the area producing as much as 15% of Australia's total wool clip.[18] Inside the city of Hamilton the majority of employment is provided by the retail industry (20%) and the Health and Community Services sector (14.5%). Education is another large employer, with four Secondary Schools, two of which enrol both primary and secondary students, as well as a number of stand-alone primary schools. The unemployment rate at the 2001 Census was put at 6.1%, with a workforce participation rate of 58.9%.[19]

Like most of South Western Victoria, Hamilton has a cool oceanic climate (Köppen climate classification Cfb) with cold fronts regularly sweeping in from the Southern Ocean.It has however some characteristics of a Warm-summer Mediterranean climate (Csb). Although day time temperatures occasionally reach into the 30s even 40s during summer, maximum temperatures in the mid teens will often linger until November and are not uncommon even during the summer months. On average Hamilton has 105 days per year with more than 1 mm of rain with a marked minimum during Summer.

There are two radio stations based in Hamilton:

Both are owned by the Ace Radio network which operates radio stations in the Western District of Victoria.

Several other radio stations broadcast into Hamilton, including national broadcasters such as the ABC and regional stations based in nearby towns in Western Victoria such as Warrnambool, Portland and Ballarat.

The gates to the Hamilton Botanical Gardens 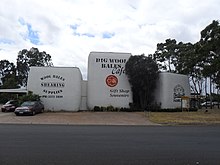 In 1881 William Guilfoyle, the director of the Royal Botanic Gardens, Melbourne was employed to design the Hamilton Botanic Gardens. Set in 4 acres (1.6 ha), the gardens are distinguished by rare botanic species, a superbly restored rotunda, a small zoo featuring rabbits, cockatiels and budgerigars and playground and the ornate Thomson Fountain. The National Trust of Australia classified the gardens in 1990 with eight tree species listed on the Register of Significant Trees in Victoria.

Hamilton Gallery Established in 1961, Hamilton Gallery's renowned collection features a decorative arts focus (well over half of its collection) of both Australian and International objects from the 17th century through to the present. Asian art and Australian paintings and prints are strongly represented but the Gallery is perhaps most well known for its rare collection of gouache and watercolour pictures by English landscape painter Paul Sandby (1731-1809).

Sheepvention, a wool-related trade-show and exhibition is held in the Hamilton Show-grounds in the first Monday & Tuesday of August each year, and attracts up to 20,000 visitors. It has a similar feel to an Agricultural show but is focused on wool and sheep. The Hamilton Agricultural Show is normally held in November.

The Big Wool Bales was an attraction (now closed) consisting of five linked structures designed to resemble five gigantic woolbales - a tribute to the importance of the local wool industry. Together they formed a building and a cafe containing wool-related displays such as historical memorabilia, including farming and shearing equipment, wool scales, old horse harnesses, wool presses and weaving looms, along with wool samples and rural clothing.

The Keeping Place is a small museum and living history centre run by local indigenous people.

The Sir Reginald Ansett Transport Museum celebrates the founding of Ansett Australia in Hamilton in 1935 and displays items from the early days of the Ansett Airlines' operation.

Netball, field hockey, basketball, soccer, tennis and cricket are other popular sports in the town. Hamilton opened a large Indoor Sports and Aquatic Centre in March 2006, which contains four basketball courts, a twenty-five-metre indoor swimming pool, 4 squash courts, a table tennis centre with 8 courts and a large gym. The city is also the home of the Hamilton Rowing Club (HRC) who compete in Rowing Victoria regattas during the summer. The Hamilton and Alexandra College Rowing Club (HACRC) sometimes compete in such events or attempt to train. Tucked behind the Historical Society in Gray Street, is the Hamilton 8-Ball and Snooker Club.

Hamilton has a horse racing club, the Hamilton Racing Club, which schedules around nine race meetings a year including the Hamilton Cup meeting in April.[21] As well as a harness racing club which has recently opened a new track, with state-of-the-art facilities.

Golfers play at the Hamilton Golf Club[22] or at the more minor course Parklands on Boundary and Hensley Park Roads.[23]

The eastern barred bandicoot is native to the area, and a reserve has been built to protect the endangered species. In more recent times (2007), the numbers both within the reserve and without have been severely diminished to the point of near extinction as a result of extended drought. Within the city the public lands adjoining the river and Lake Hamilton have been subject to spasmodic tree-planting projects.

South West Institute of Technical and Further Education (TAFE) has a campus in Hamilton, offering post-secondary and trade courses and qualifications.

RMIT maintains a training and research site 4 km from the centre of Hamilton,[24] which is home to the Potter Rural Community Research Network.[25] Vocational training at the site is delivered by South West TAFE while master's degrees and PhDs by research are facilitated by RMIT.[26]