Halls Gap is a town in Victoria, Australia. It is located on Grampians Road, adjacent to the Grampians National Park, in the Shire of Northern Grampians local government area. The town is set in the Fyans Valley at the foot of the Wonderland and Mount William ranges.[2] At the 2016 census Halls Gap had a population of 430.[1] The approximate driving time from Melbourne is 3 hours.

The first settler was Charles Browning Hall who set out in search of a suitable grazing run when he found the cattle market at Port Phillip overstocked in 1841. Establishing a station just east of the Grampians in a spot known as "Mokepilli" to the indigenous inhabitants (probably the Djab wurrung). Halls Gap was originally located at where the now Lake Bellfield Reservoir is now located.

By following aboriginal tracks he came upon the gap which now bears his name.[3] 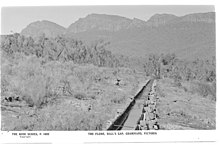 The Flume in Hall's Gap, Victoria 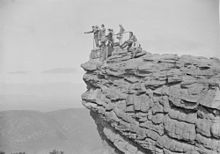 Lookout in the Grampians

Its chief industry is tourism, due to its location in the Grampians National Park. Australia's longest running Aboriginal cultural centre, , is located in the town.[5] The Halls Gap Zoo is located 7 kilometres (4.3 mi) from town. There is now a local chemist in town located at the Stoney Creek shops.

Golfers play at the course of the Halls Gap Golf Club on Red Gum Lease Track.[6]

Halls Gap is home to one of Australia's longest running food and wine festivals, held over the first weekend of May every year. Launched in 1992, Grampians Grape Escape is a hallmark event for Victoria and provides food and wine offerings by more than 100 local artisan producers, live music and family entertainment.[7]