Glenthompson is a town in the Australian state of Victoria(South West of Victoria). It lies on the Glenelg Highway between Hamilton and Ballarat, close to the Grampian mountain range. At the 2016 census, Glenthompson and the surrounding area had a population of 234.[1]

Its most notable landmark is the tall brickworks chimney that is also the symbol of what was the township's main industry for a period of time, as it provided bricks for regional buildings constructed in the post-war era.[2] The brickworks is now closed but people can arrange a tour by appointment.

Originally, a small township named Yuppeckiar was built approximately five kilometres away, but it was moved to the present site of Glenthompson because of the construction of the railway linking Ballarat and Hamilton. The Post Office opened on November 1, 1866 as Glenthompson, was known for some months in 1872 as Yuppeckiar before reverting to Glenthompson.[3]

Pastoral settlement in the Glenthompson area began in 1848, and the subdivision of the land began in 1853. One of the resulting portions was the Glenronald property (which may be the source of the first part of the towns name, with the second part believed to have come from the name of a surveyor or local land owner).[4] 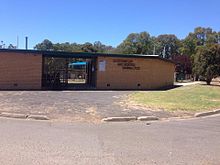 Nowadays it is a very quiet country town that serves as a minor transport and services hub for the surrounding farming district.

Glenthompson is distinctive in that the town's hotel, Mac's Hotel, was built across the road from the railway station, some distance from the main road, unlike other country pubs in towns of a similar size, highlighting the importance of the railway in the town's development. This hotel burned down during the late 1800s on a different plot of land than the one that closed in 2013. The hotel that closed in 2013 was actually a private home, that was converted in the mid 20th century to a hotel long after its construction.

Rose Cottage in McLennan Street was first built in 1850 and was used for business as a blacksmith, the local bakery, and the front room for dressmaking and alteration.[citation needed]

In 1996 the residents got together and started a History Group known as Glenthompson Historical Group Inc. which operates a museum out of the former Glenthompson Railway Station. The History Centre is open to visit on Sundays from 12pm or by appointment.

St Peter's Anglican Church in McLennan St (Caramut Road) had the story of St Peter produced as a mural around the internal walls of the church. Local artist Gareth Colliton from Warrnambool used local identities in place of the traditional faces to produce this modern variation. Well worth a look. The Church is open every day.

The town, in conjunction with nearby township Dunkeld, has an Australian Rules football team, Glenthompson-Dunkeld (AKA Rams), competing in the Mininera & District Football League (MDFL). In 2010, the team won the league Premiership.

The first school was opened in 1868. This was rebuilt in 1902, featuring a steeped structure. In the same year, a Mechanics' Institute was opened.

In 1998 the school amalgamated and became an outer campus of the Dunkeld Consolidated school.[4] In 2011, with only one student still enrolled at this campus, a decision was made to close the campus. The children of the town now go either to Dunkeld or Lake Bolac for their Primary years.

Secondary school is obtained in either Lake Bolac or Hamilton, with buses taking the children of the town and its surrounds.